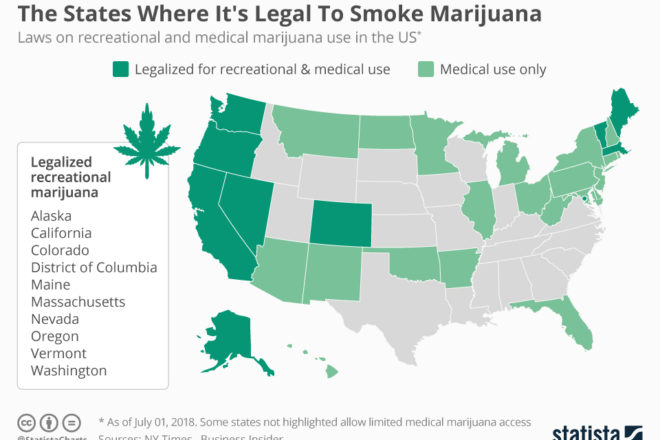 The percentage of Americans who support marijuana legalization, including majorities from the two major political parties – 72 percent of Democrats and 51 percent of Republicans.

The percentage of Americans who support medical marijuana. That represents 96 percent of independents, 95 percent of Democrats and 90 percent of Republicans.

The first year recreational marijuana was allowed in the United States (in Colorado and Washington state).

The number of U.S. workers employed in the marijuana industry in 2017. That is expected to almost triple by 2021.

The amount in marijuana taxes the state of Nevada has collected since launching legal sales in July 2017.

The amount of marijuana sales tax the state of Oregon has earned the last two years.

The amount of adult-use marijuana sold in Nevada since going legal in July 2017.

The amount of taxes California is expected to collect this year after its first full year of legal recreational sales.

The estimated taxes U.S. marijuana business owners will owe the federal government for 2018.

Projected sales this year for medical marijuana, up from $3.7 billion in 2017.

The estimated legal marijuana sales anticipated this year. It was $6.2 billion in 2017, but California jumped on the bandwagon in January.