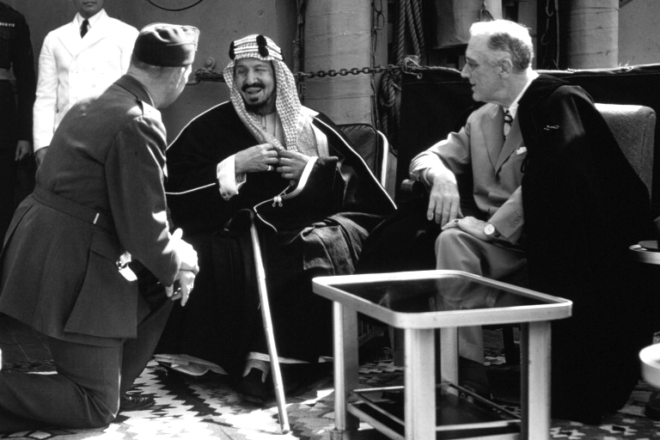 President Franklin D. Roosevelt meets with Saudi King Ibn Saud in Egypt on Feb. 14, 1945, aboard a U.S. warship in the Suez Canal. Roosevelt was on his way home from the Yalta conference. U.S. Signal Corps photo.

In light of the murder of Washington Post columnist Jamal Khashoggi by men with ties to the highest levels of the Saudi government, and the Trump administration’s subsequent timid response, we take a look at U.S.-Saudi relations.

That relationship is summarized on the U.S. Department of State website (state.gov):  “Saudi Arabia’s unique role in the Arab and Islamic worlds, its possession of the world’s largest reserves of oil, and its strategic location all play a role in the long-standing bilateral relationship between the Kingdom and the United States. The United States and Saudi Arabia have a common interest in preserving the stability, security, and prosperity of the Gulf region and consult closely on a wide range of regional and global issues. Saudi Arabia plays an important leadership role in working toward a peaceful and prosperous future for the region and is a strong partner in security and counterterrorism efforts, providing military, diplomatic, and financial cooperation. It works closely with U.S. military and law enforcement to safeguard both countries’ national security interests.”

Saudi Arabia’s ranking as a U.S. arms buyer. Saudi Arabia was the first country President Trump visited after taking office, where he and King Salman bin Abdulaziz Al Saud signed letters of intent for the kingdom to purchase arms from the U.S. totaling $110 billion. Trump has been touting that number as what’s at stake in this relationship, but a number of sources have pointed out that these were not signed contracts but only letters of intent.

Saudi Arabia’s ranking as exporter of U.S. goods in the Gulf region (the United Arab Emirates is first). That amounted to $18 billion in exported goods in 2016 (latest available figure), compared to imports to the U.S. at $16.9 billion, resulting in a trade surplus of $1.1 billion.

The number of the 19 passenger jet hijackers on Sept. 11, 2001, who were Saudi Arabian citizens.

The number of pages missing from the 9/11 Commission Report, which fueled speculation the Bush administration was covering up Saudi complicity in the attacks.

The percentage of Saudi Arabian government revenues derived from petroleum. It also represents 44 percent of the country’s $646 billion GDP.

The year the U.S. recognized the Kingdom of Hejaz and Nejd and its dependencies as an independent state. The name was officially changed to the Kingdom of Saudi Arabia in 1932.

The year Standard Oil of California (now Chevon) won a concession to explore for oil in eastern Saudi Arabia. The company struck oil in 1938. It wasn’t until 1944 that the extent of the oil reserves in Saudi Arabia was fully known (world’s largest holder of crude), at which time the Arabian American Oil Company, or Aramco, was established by Standard Oil and three partners who would eventually morph into Texaco, Exxon and Mobil. Together they made Saudi Arabia the world’s largest oil exporter. Aramaco and the Saudis agreed to a 50/50 profit split.

The year diplomatic relations were established with the kingdom, although the American envoy, Bert Fish, was stationed at Cairo until the American Legation was established in Jidda in 1942.

The year the American Legation was elevated to embassy status.

The year the Mutual Defense Assistance Agreement is signed, providing the basis for U.S. arms sales to Saudi Arabia and for a permanent U.S. military training mission in the kingdom.

The year the embassy was moved from Jidda to Riyadh.

The year King Fahd issued a decree announcing that the kingdom had been gradually buying Aramaco assets, and that the company would now be known as the Saudi Arabian Oil Company, or Saudi Aramaco.

When Iraq declares war on Kuwait, Saudi Arabia declares war on Iraq and the U.S. deploys 500,000 troops to the kingdom, causing a millionaire Saudi native by the name of Osama Bin Laden to express outrage at the presence of foreign troops. When the war ended a year later, 5,000 U.S. troops remained in the kingdom “to protect U.S. and Saudi interests in the region.”

The approximate number of Saudi students at U.S. colleges and universities.

The amount of expected U.S. arms sales to Saudi Arabia in the next decade.