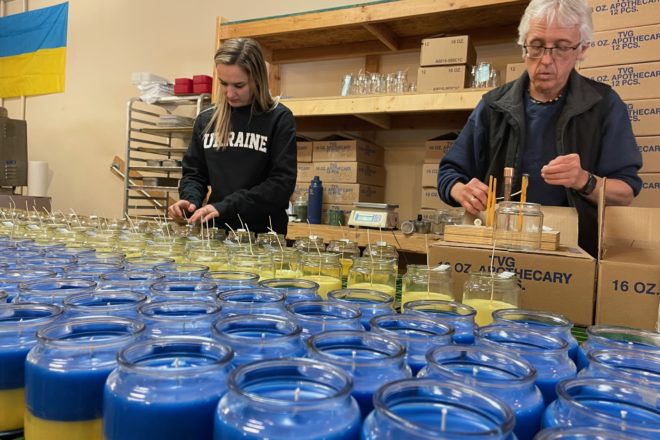 Ukrainian civilians are taking up arms and constructing Molotov cocktails to defend their homeland against Russia, which launched a full-scale invasion of the democratic Ukraine on Feb. 25.

Five thousand miles away in Door County, moved by the cries and fears of loved ones, Christiana Gorchynsky-Trapani, owner of Door County Candle Company and a second-generation American Ukrainian, has turned her candle-making business into a form of ammunition to help the people of Ukraine.

“It’s something I’ll never forget,” she said about the conversation she had with her maternal aunts and uncles on the day Russia invaded. “They were on the phone, scared and crying. It was me, my mom, my dad and my grandma, and my grandma was shaking, reliving the war [World War II].”

The somber and helpless feelings of that day moved Christiana to action. Since then, and alongside family members, employees and volunteers, she’s been mustering goodwill soldiers in the form of vanilla-scented candles. Colored with two equally sized bands of yellow and blue to represent the Ukrainian national flag, the candles cost $29.95. Christiana will send 100% of the profits from their sale to the Ukrainian 501(c)3 called Razom for Ukraine – “togetherness” in English. The organization is providing critical medical supplies and amplifying the voices of Ukrainians, according to its website.

“Even if we just sell 10 or 20, it’s still going to help, and that’s what matters,” Christiana said when she conceived of the idea.

Three days later, she had sold 4,500 candles and counting – an astonishing number that threw the operation into overdrive. On Monday, the quiet intensity and dead seriousness of the cause was as noticeable among the workers as the vanilla-scented air.

They’ve now ordered more pallets and 500 pounds of fragrance, and suppliers have not let her down after learning the reason for the emergency orders. Then there are the people who are walking in off the street not just to buy candles, but to help make them.

“We’ve had people walk in and say, ‘We want to help,’” Christiana said. “A Ukrainian woman stopped in who lives in Door County and said, ‘What can I do?’ This community is incredible.”

The helpers include her husband, Nic; her father and mother, George and Natalie; at least seven employees; and numerous volunteers. She has no end date planned for the candle-making campaign.

“I feel like as long as people want to support the cause, we’ll keep making candles,” she said.

Christiana’s parents are first-generation Ukrainians, George’s parents having immigrated to Chicago following World War II. George is an emergency-room physician at Door County Medical Center, where he serves as chair and director of the emergency room. The family has been in Door County for almost 20 years, moving to the peninsula when Christiana was in third grade. George and Natalie would send their children to school in the Sevastopol School District – 5,266 miles from Sevastopol, Ukraine.

The family has retained the language of their relatives and these days hears their “heart-wrenching” stories firsthand, George said, witnessing videos of scenes such as helicopters dropping incendiaries eyeshot from where the relatives live. The borders are controlled and effectively sealed along Ukraine’s western edge, where Christiana’s maternal relatives are located. With nowhere to go, they’re all staying put.

“You see it on TV; we’re so used to TV,” George said. “But when you see it and hear it firsthand, it really hits home.”

The lead-up to the invasion was well reported and documented, but Ukrainians were still caught by surprise, Christiana said. They just couldn’t believe it would really happen.