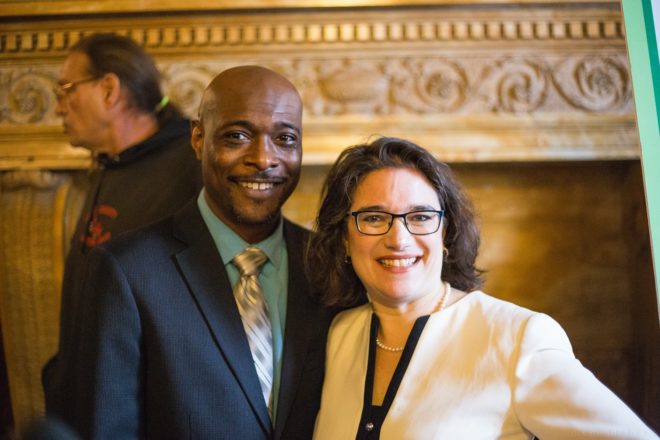 Numerous bills to decriminalize marijuana have been introduced in the legislature but have not gotten anywhere, the most recent coming last week from Rep. Melissa Sargent (D-Madison), who has introduced the legalization four times now.

“The power of the people is the will of the land,” she said at a press conference announcing the legislation. “I’m not afraid of the mountain that we have to climb here.”

In a recent op-ed piece posted to her website Sargent wrote, “The simple truth is, the most dangerous thing about marijuana in Wisconsin is that it is illegal.”

“I believe Melissa Sargent’s alter ego is Wonder Woman,” said Alan Robinson, executive director of Wisconsin NORML (National Organization for the Reform of Marijuana Laws), a group dedicated to fighting for complete freedom in the use of the cannabis plant. “When she’s not in the legislature, she’s probably off saving the planet. I couldn’t possibly sing her praises enough.”

Robinson also has praise for Stevens Point Republican Sen. Patrick Testin, who has spoken publicly about how the life of his grandfather, who was suffering from cancer, was prolonged by illegally smoking marijuana.

The Peninsula Pulse contacted Robinson for his view on where things stand in Wisconsin.

Robinson said he was moved to become an activist as he heard more stories about people who have suffered from different aspects of the cannabis prohibition.

“When you meet somebody who has been an outstanding member of the community, who is an adult and who uses cannabis for their own purposes, and you find them getting prosecuted like violent criminals, you see that as a miscarriage of justice, and you must act,” he said, adding, “It is monstrous to deny it for its medical benefits.”

Robinson said there is both a groundswell of public support and attitudinal changes among legislators.

“I see Republican support where I haven’t seen it in the past,” he said. “But I do not think we are on the way to recreational cannabis. I believe that the wall we will run into is named Scott Fitzgerald and Robin Vos.”

He maintains that with Senate Majority Leader Fitzgerald elected to office in Dodge County, which is home to and close to several large correctional institutions, his constituency guarantees there is no chance he will ever change his opposition to marijuana legalization.

It’s the same thing, Robinson said, for Assembly Majority Leader Vos, although for different reasons. Robinson believes Vos is beholden to big pharmaceutical companies that do not want their drugs replaced by medical marijuana.

“Robin Vos has said ‘Never.’ He is on record,” Robinson said. “The gentleman believes we do not know what is best for us. He said sometimes we have to lead by example. I am so appalled. That was his answer to the groundswell of support.”

Robinson said he thinks there will be movement on medical marijuana in Wisconsin, but not recreational use in the near future.

Robinson said in order to eventually have the will of the people realized in Wisconsin, several things must happen.

“We need to have our districts drawn in a fair and nonpartisan way,” he said. “We need to have the public educated on the issues with factual basis. We also need to remove the stigma of cannabis and erase the Reefer Madness propaganda that has been heaped upon us for 70-plus years.