Charity as a tourism driver?

It’s not how we usually think of it, but Brett Bicoy, Director of the Door County Community Foundation (DCCF) makes a strong case.

“Charitable giving is the lifeblood for every organization that is essential to our community’s health – the hospital, clinic, schools, HELP of Door County,” Bicoy explains, “as well as the aspects that enhance Door County as a destination – arts, performance, environment . . . organizations that help make a destination that contribute to our economy. Many of the requirements for drawing people are charities.”

Bicoy says that Door County has evolved into a community where charity is not simply a bonus, but a necessity. “Our community requires a healthy and vibrant charitable environment,” he says. “There are many communities around us that have the water, that are on the lake, but they don’t draw. They don’t have the richness of the arts and culture that we have.” 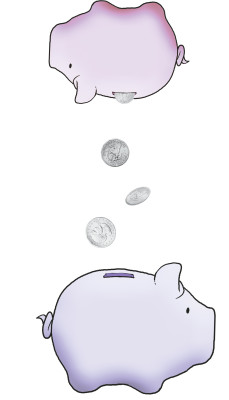 The idea of charity as an economic engine becomes particularly intriguing when put in the context of our times.

Over the last half century the face of American wealth has changed dramatically. In the wake of World War II a new middle class emerged, and as the Baby Boomers entered the workforce, the largest generation of wage earners in history began accumulating assets, holdings, and investments previously unimagined.

Now, those boomers are entering or approaching retirement, and analysts are anticipating the largest transfer of wealth in history in the coming years. In 1999, John Havens and Paul Schervish of the Center for Wealth and Philanthropy (CWP) at Boston College produced a study that put a dollar figure on the transfer.

The results of the study, “Millionaires and the Millennium,” shocked the philanthropic community. It concluded that at least $41 trillion would transfer among generations by 2052, and $1.7 trillion would be bequeathed to charities by 2017.

The methodology developed by Havens and Schervish has since been replicated for states and communities across the country, including one in Wisconsin that tried to predict giving within the state over the next half century. The “Wealth in Wisconsin” study was commissioned in 2006 by the state’s 21 certified community foundations, and it projected that $687 billion would be transferred among generations in the state by 2050. In the next decade alone, the study shows that charities stand to benefit greatly if only a sliver of that transfer is captured. Over $5.3 billion in endowments could be realized if just five percent of the wealth handed down over the next ten years goes to charity.

Door County non-profits that can effectively tell their story are uniquely positioned to reap a windfall. Door County’s net worth of $390,000 per household is 159 percent of the state average, second only to Ozaukee County (where the state average is $245,000). The Wealth in Wisconsin data estimates nearly a billion dollars of wealth will be transferred from one generation to the next on the peninsula in the decade to come, and more than $5 billion by the middle of the century.

“We’re about to undergo, as a nation, the largest transfer of wealth in the history of the world,” Bicoy says. Though this may put visions of dollar signs dancing in the heads of non-profit directors, he says, it has yet to be determined what role charity will play in the transfer.

Kathryn Miree, president of Kathryn W. Miree & Associates, Inc., a non-profit consulting firm, commented on this in the Journal of Gift Planning. “How much of that wealth is captured by charities has everything to do with the relationships those charities build with their donors and how actively and professionally they approach and steward the gift planning process,” she says.

In Door County the answer to these questions is vital to the long-term health of the community. The peninsula is home to numerous non-profit organizations – groups that provide the community’s social services backbone, key attractions in Door County’s destination marketing campaign, a wide breadth of culture, and the preservation of the natural environment.

But Door County faces challenges much deeper and more immediate than drawing and entertaining visitors. “We have social and human service needs as well,” Bicoy says. “We need to do a better job with that sector. Helping the people who work in restaurants, inns, and arts. Those that provide the services to the visitors that drive the economy.”

Jane Stevenson held Bicoy’s position with DCCF before retiring last year, and prior to that worked many years with United Way of Door County, an experience that opened her eyes to the hardships many people face in the community. “We saw how important the human services are in my time there,” she says. “The people working three jobs and raising a family. There is a challenge, particularly in human services, to let people know there is a need, that there is that other side of Door County.”

Stevenson, a mother of five grown children, moved to Sturgeon Bay from the Twin Cities with her husband John in 1977, and the couple immediately got involved with the community. “We wanted to help and didn’t expect anyone else to do it for us,” she says. “We felt that if we wanted to take advantage of what the community has to offer, then we have to help. If there is a problem in the community, then work within it, rather than stand on the sideline and ask why somebody doesn’t do it.”

Fortunately for those in need, Door County is a generous community. Bicoy has worked for community foundations in Nevada, Ohio, and Green Bay over the past decade but says the peninsula community is among the most giving he’s seen. “Door County is without question a place where people regularly step forward and get involved, and volunteer their time,” he says. “It’s impressive how many people are actively engaged. I’d be willing to bet that levels of charitable giving and volunteerism in Door County are significantly higher than in communities with similar populations.”

The community’s economy is driven by the dollars visitors spend on vacation, but as Stevenson pointed out, the undeniable pull Door County has on the hearts of those who make it a second home delivers a secondary benefit to the vitality of the area. “The seasonal community brings with them a lot of different interests,” she explains. “People can find their own passion here.”

Nearly a decade after he co-authored CWP’s landmark study, Havens’ predictions have come under scrutiny, as giving has not lived up to the study’s short-term predictions. Just $127.6 billion was bequeathed to charities between 1998 and 2004, or 7.5 percent of the total predicted by “Millionaires and the Millennium.”

Some of this shortfall can be attributed to how much the world changed shortly after the estimate came out. The dot-com crash, the 9/11 attacks, and now the lending crisis have all rocked public confidence. But Havens, a Senior Research Associate and Associate Director of CWP, pointed to a less obvious cause. “We anticipated that most giving would be through bequests, and it turns out that is not the case,” he says. “More is done in estate planning. People are doing a lot more giving through family foundations and trusts. They’re finding ways to see things done during their lifetime.”

In a November 2008 interview, Havens said initial numbers had shown that the financial crisis hadn’t changed attitudes at the high end of the wealth ladder. This was because those among the nation’s wealthiest “are more diversified and operate more rapidly in the event of a downturn to move assets and limit vulnerability.”

Havens also said that the super-wealthy tend to give more out of assets, the type of giving that is in the pipeline anywhere from a year to 18 months. A downturn in such giving was not immediately discernable. He predicted that non-profits would see the biggest impact among contributors of average wealth. “The average person gives out of income,” Havens says. “As their perception of financial security, both short and long-term, declines, their giving may decline.”

As the economic crisis deepens, he says the biggest thing to watch for non-profits is a likely shift in where gifts are directed. “In times of a financial downturn giving becomes more about need,” he explains. “Giving to the arts and culture tends to decline and shifts to human needs such as housing and shelter.”

The economic instability that shook the world in the last quarter of 2008 served as a good illustration of why non-profits must plan long term, and why preparing a strategy to be involved in the massive wealth transfer ahead is integral to viability.

Bicoy says he encourages all non-profits to create an endowment, as it shows the board is thinking long term, and in times of economic uncertainty, it says to donors, “We will be here forever, and this too shall pass.”

“We in the non-profit sector do a remarkably poor job talking about estate planning,” Bicoy says. “It’s hard to put work and time into something that won’t benefit us until so far down the road, so the annual fight takes the bulk of our focus.”

Only four percent of people leave money to charity when they die. If non-profits can increase that number just a little, it could have a dramatic impact on the future of crucial organizations and the constituents they serve for generations.

“Giving has a remarkably simple and transformative effect on the community,” Bicoy says. “It’s an investment in the community, a tool for accomplishing a greater good. You look at the buildings and rooms of various organizations all around us, and there’s somebody somewhere who thought it was important.”

Stevenson suggests that how the transfer plays out in the decades to come will tell us a lot about what’s important to the present generation of wealthy Americans on one hand, and the resourcefulness and ingenuity of non-profits on the other. “It’s about how one generation will pass on its values to the next,” she says, “and how the non-profit sector can cultivate new leadership, new volunteers, and new donors.”

Amount expected to transfer from decedents’ estates to heirs

Percent of families contribute 26 percent of all charitable dollars