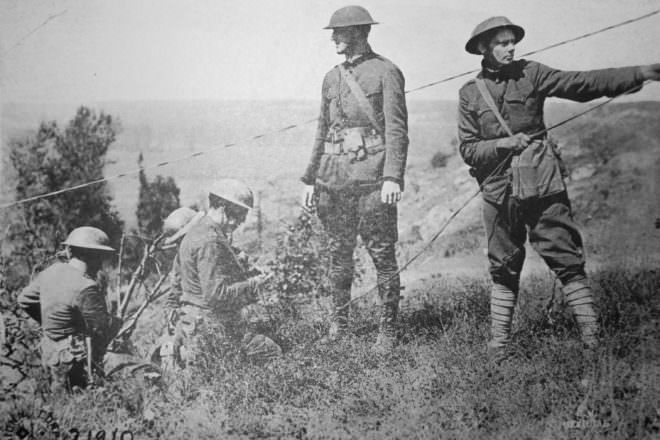 “Amid the tears and cheers and farewells of mothers, fathers, sisters and brothers, sweethearts and friends Company F left home this morning bound for Camp Douglas, the state mobilization camp….”

So read the front-page story in the Aug. 17, 1917, edition of the Door County Democrat, announcing the departure of the Door and Kewaunee county recruits for boot camp before being sent to the trenches in France as part of the 32nd Division’s efforts in World War I. 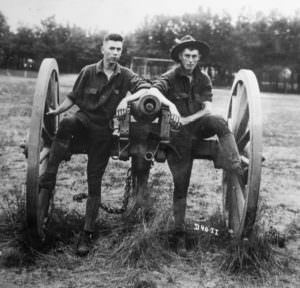 Two Wisconsin National Guard soldiers pose with a artillery piece at the Wisconsin Military Reservation at Camp Douglas prior to shipping out for training at Camp MacArthur, Texas (Photo courtesy of the Wisconsin Veterans Museum)

“World War I and the creation of the 32nd Division for the war is considered to be the founding of the National Guard as we know it today,” said Capt. Brian Faltinson, who has served as historian for the Wisconsin National Guard since 2007. He is also serving as chief historian for this project, and is a historian in civilian life, working for a small consulting firm that does historic preservation.

“The National Guard’s role in the defense of our nation can be directly traced to service in World War I,” Faltinson said. “It’s coming up on the 100th anniversary of that so we want to recognize the service and sacrifice of those 15,000 who came before us and gave birth to many of the units we still have in the state today. The 32nd Division is now the 32nd Infantry Brigade Combat Team. Units within that brigade have deployed numerous times to Iraq and Afghanistan. The same story continues.”

Faltinson said 72 cities around the state contributed soldiers to the 32nd Division during World War I, including Company F out of Sturgeon Bay.

“A lot of Door County people joined the Sturgeon Bay unit,” he said. “They first reported to Camp Douglas. Shortly after they went down to Camp MacArthur, Texas. They trained and joined Michigan to become the 32nd Division. In January they sailed for France and they were in combat by May of 1918 and continued through combat until armistice on Nov. 11, 1918.” 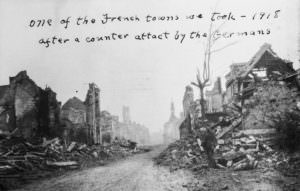 A 32nd Division soldier poses in a war-damaged village in France. (Photo courtesy of the Wisconsin Veterans Museum)

The commander of Company F was Capt. Edward S. Reynolds, son of Edward Reynolds, who managed Door County’s Fruit Growers Canning Co. Capt. Reynolds was actually called home early shortly after the end of the war in early 1919 when his father died and he was needed to run the business. Reynolds and two other members of Company F – Corporal Carl Koutnik and Sgt. Clyde O. Helgeson – were awarded the Croix de Guerre by the French government for bravery on the battlefield.

“The division in France was 23,000 to 24,000,” Faltinson said. “There were 15,000 casualties – that’s wounded, killed and died of accidents, died of the flu, died in combat. About 2,600 died in combat. It was a tremendous sacrifice. That level of casualties happened in about a six-month period of time, tremendous carnage.”

The Wisconsin National Guard’s public affairs office will release a series of video vignettes and Faltinson said they hope to produce a full-length documentary film. The videos will accompany feature articles released in conjunction with key dates surrounding the 32nd Division’s founding and service in France and Germany, available at DawnoftheRedArrow.com.

A corresponding social media effort and blog that features excerpts from primary documents, letters and other artifacts will help transport readers and viewers back to 1917-18 and spotlight the extraordinary service and sacrifice of the soldiers responsible for the Red Arrow’s legacy. 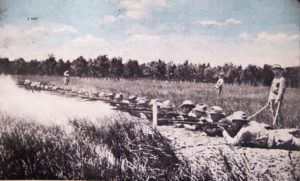 Formed from National Guard units from Wisconsin and Michigan in 1917, the division earned its “Red Arrow” moniker on the battlefields of Europe by piercing every enemy line it encountered during the war. Noting the division’s ferocity in combat, the French referred to the soldiers of the 32nd Division as “Les Terribles.”

The unit also served in the Pacific Theater during World War II and earned the distinction of serving more days in combat – 654 – than any other American division in the war.

After World War II, the division became an all-Wisconsin National Guard unit until reorganizing as a Wisconsin-only brigade in 1967.