Cellcom announced in August that it would build a fiber network from Green Bay to Gills Rock to expand its wireless network, increase data capacity and improve its high-speed internet service.

Greg Diltz, owner of Northern Door Communications in Sister Bay, a Cellcom partner, said the fiber backbone is needed to keep up with rapidly changing technology. 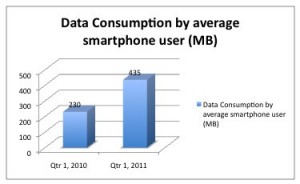 Data consumption by all users via mobile devices is skyrocketing. Source: Nielsen.

“If our pipeline today is a quarter inch pipe, this is like a three-foot culvert to carry all that data going off the peninsula,” Diltz said. “This is what will allow us to keep pace with 4G, or fourth generation, devices. You can’t build a 4G network without a fiber network.”

Cellular service providers weren’t prepared for the surge in data usage that came with the growth of the smartphone market and the popularity of tablets like the iPad. Smartphone data usage grew by 89 percent from the first quarter of 2010 to the first quarter of 2011, according to a Nielsen consumer research report. The average Android smartphone uses 582 MB of data each month, while the average iPhone uses 492 MB. As a result, unlimited data plans are going by the wayside.

“The boom in data usage took all cellular phone companies by surprise,” Diltz said. “We had no idea it was going to be this huge. Tablets blew us all away.”

The fiber backbone will zigzag the peninsula to connect Cellcom’s tower locations, but the Nsight subsidiary does not plan to offer fiber-to-the-home. The line will run through the Sturgeon Bay Industrial Park and pass the hospital, shipyards, and other high-demand users that may sign on to use the service, and some Door County municipal entities will connect to it. 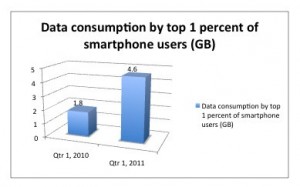 But data usage is rising even faster among the top one percent of consumers. Source: Nielsen.

Residential customers will not be offered connections directly to the fiber network. Cellcom will use the line to enhance the mobile broadband service it introduced in 2008.

The line from Green Bay to Sturgeon bay will be completed this fall, with the line extended to Gills Rock by the end of 2012.