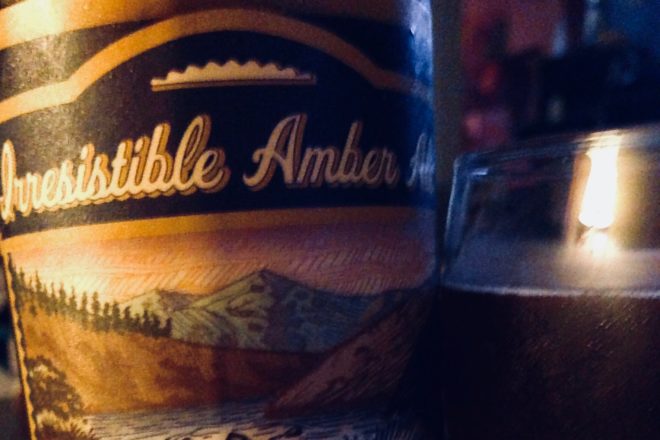 I poured this after a dry day at work and coming home to learn that I had screwed up in setting the timer I had connected to the Crock-Pot, so it never turned on and the chunk of well-marinated pork I had been looking forward to shredding when I got home had been sitting at room temperature in the Crock-Pot all day. Since the day was cloudy and never got above 60 degrees, I turned the sucker on high and we’ll see if I live or die after eating the finished product.

Once I cracked the aptly named Irresistible Amber Ale, I wasn’t too concerned about the pork anymore. Maybe I’ll just roast a cauliflower and let it go at that. We’ll see…

I had never heard of this brewery. The amber and another style from the same Montana brewery that I will get to a little later were dropped off by Baileys Harbor resident Jim Rogers. These beers are not available east or south of North Dakota, so thanks, Jim!

I think I might have mentioned before that there was a time I would go a great distance for an amber ale, but back then you had to go great distances for any beer outside the normal American macrolager. I’m talking about the years before the craft beer evolution/revolution hit the Midwest.

We had our own pre-plugged-in network for good beer and homebrewing supplies, always looking for the next new thing to taste or experiment with. Can’t imagine how we managed without the interweb.

Amber was one of the first beers I made, with lots of crystal and Vienna malts for color and sweet, malty flavor.

Irresistible Amber Ale lives up to its name. With the beautiful amber color and sweet, biscuity flavor, I’m going to have to get over to the Bozeman area sometime to see how this stuff tastes fresh from a tap. Really great, I’m betting.

In fact, I’m savoring this beer so much I’ve decided to follow the old saw, if in doubt, throw it out, especially when I recall a death-defying incident with food poisoning in Oklahoma City. Yikes!

So the Crock-Pot pork loin is destined for the trash, and the roasting cauliflower is beginning to smell delicious. I tossed the florets in olive oil, nutritional yeast, lemon juice, thyme leaves, onion and garlic powder, hickory smoked salt, paprika and tumeric.

Halfway through the 35-or-so-minute cooking time, I pulled the tray out, flipped the cauli florets and tossed a handful of walnuts into the mix and put them back in the oven.

Yum! Next time I must remember to save some amber for dinner because I believe it would suit this “cheesy” vegan roasted cauliflower very well.

I can’t believe I ate the whole head! Who eats a whole head of cauliflower? That must be enough fiber to power a small city! But I don’t feel I’ve made a pig of myself, and have little fear of contracting trichinosis or any other foodborne illness. That’s something, I guess.