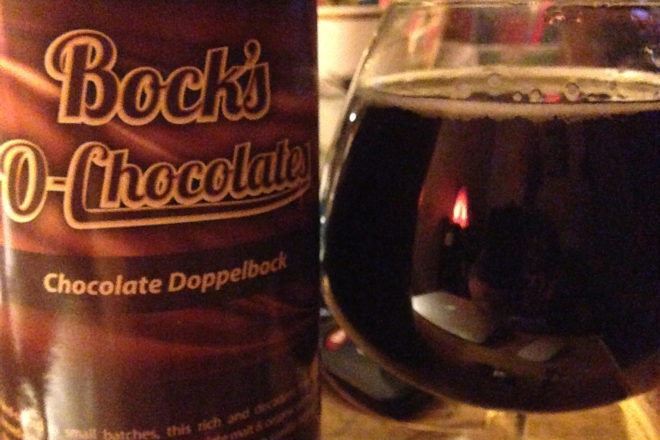 How could you pass up a beer with this name – Bock’s O-Chocolates. Are you kidding? A chocolate doppelbock? I’m in.

I miss the days of the annual spring release of bock beers. I’m thinking of the pre-craft days. Bock, a strong, dark, malty lager, was always released in the spring. Point Bock, Huber Bock, Leinie’s Bock. There were legendary stories of people lined up at breweries, waiting for the spring release.

A doppelbock is bock on steroids. Double the bock.

A place in Oshkosh back then that was known for its large selection of international beers also brought in bocks from a variety of mostly regional breweries of the time, and sold them for a buck a bottle. After we put the next day’s newspaper to bed around midnight, the newsroom crew would head over for as many dollar bocks as we could down in the very limited amount of time we had before closing time. Fun times!

The old story told by people who didn’t have a clue about brewing operations was that when the breweries did their spring cleaning, they cleaned out their tanks and the result was bock beer, which explained to them why it’s so much darker than regular lager.

Bock is an old German style of lager from the city of Einbeck. When the style moved south to Bavaria, folks in Munich turned Einbeck into “ein bock,” which is billy goat in German. The name stuck and forever after goats were the mascots for spring bocks. Goats were featured on many bock labels.

But it has been several decades since we looked forward to the release of bock, and you just don’t see many examples of it from crafties these days.

So I was happy to see this bomber bottle of chocolate doppelbock from Vintage Brewing Co. of Madison.

This is a big malty chocolate glass of lager – a 7.2 percent lager.

According to the label, Bock’s O-Chocolates is brewed with chocolate malt and organic cocoa powder, and then aged on toasted cacao nibs and Mexican vanilla beans.

Ah, yes, that explains the aroma – vanilla. Definitely more vanilla in the nose than on the tongue. This is another lip-sticking big, flavorful beer.

Most people, I think, would not identify this beer as a bottom fermenting lager. Too rich and dense and heavy for lager. And then you have another sip and feel the carbonation dancing across the palate as only a lager can.

The same beer on tap at the brewery mentions the rich chocolate malts, Dutch-process cocoa, roasted cocoa nibs and Madagascar vanilla beans. Have to try that some time. Perhaps until I’m chock full o’ bock.