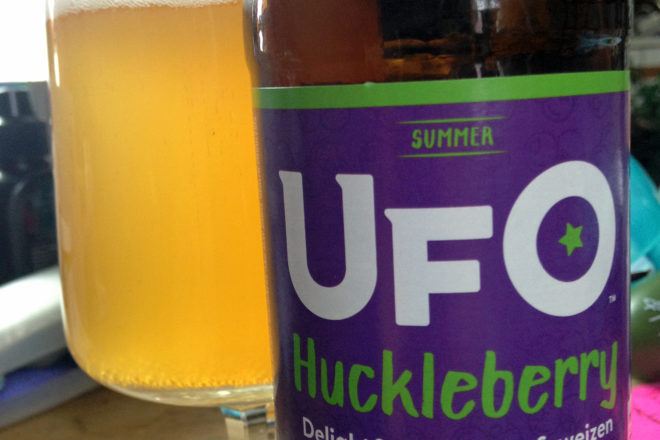 Two things attracted me to this beer, and both are in its name, UFO Huckleberry.

Number 1 was the huckleberry component. While I’ve never had a huckleberry, as a kid I was a big fan of Huckleberry Hound, and a little later of Huckleberry Finn, and later still of Val Kilmer’s performance as Doc Holliday in the 1993 movie Tombstone when he tells itching-for-a-fight bad hombre Johnny Ringo, “I’m your huckleberry,” which in the lingo of the day meant, “I’m your man.”

And, of course, Number 2 is the UFO part of the name. The cap features the typical flying saucer-type UFO. While it appears to be a random name, it got my attention. I want to believe. 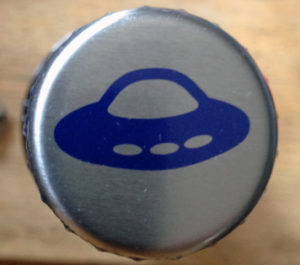 This “delightfully juicy hefeweizen,” as it is described on the label, comes from the employee-owned Harpoon Brewery of Boston and Windsor, Vermont (although the label identifies this beer as a product of the Mass. Bay Brewing Company, which is the name the company it was incorporated under in 1986).

On the back label is this greeting: “Hey there, Wisconsin! We’re thrilled to be here!…” So they must have just branched out in this direction.

As soon as I cracked the cap, a luscious berry aroma wafted out of the bottle, and I could not wait to pour it into a big glass and take a sip.

Wow! That’s a really nice beer. It is “delightfully juicy.” What a great summer beer.

I remember when a certain once-family owned Wisconsin brewery came out with their version of a popular English drink for designated drivers – shandy, a mix of weak beer and what passes for lemonade in England.

I’m not sure, but I think the first version of the Wisconsin brewery’s shandy was berry-flavored, and I definitely recall that it tasted more like Fruity Pebbles than beer. Yet it remains a big seller for the brewery.

Unlike the overly fruity shandy, UFO Huckleberry tastes like beer, not artificially flavored cereal. The huckleberry melds beautifully into the rich hefe flavors, complementing rather than dominating.

At 4.8 percent, it makes for an excellent summer session beer.