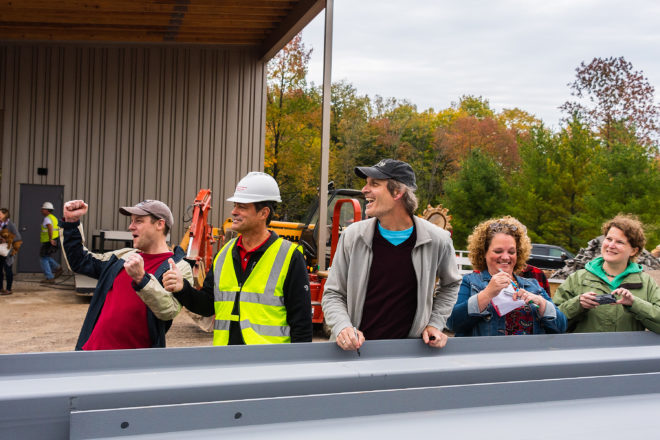 It was a momentous occasion Oct. 3 when the steel beam to finalize the roof of the main building on Northern Sky Theater’s new campus arrived at the construction site at the junction of county roads A and F. As is the custom on big building projects, board members and senior staff gathered to sign the beam, which was installed in the following days, allowing the removal of the temporary support beams holding up the walls of the 248-seat theater.

Once the structure is under roof, the interior will take shape during the winter and spring, and the theater will open with a new musical comedy next fall.

The first part of the campaign to fund construction of the new campus reached 90 percent of its goal. Gifts toward the final 10 percent, totaling $650,000, are critical to allow Northern Sky to finally realize its dream of continuing to provide original musical theater for future generations during the fall, winter and spring and to make improvements to its summer theater location in Peninsula State Park.