I think it takes a lot of chutzpah to name yourself after the greatest lake in the world. After all, Lake Superior is a big name to live up to.

So, beers from the Lake Superior Brewing Co. of Duluth, Minn., better be big, bold and, well, superior. 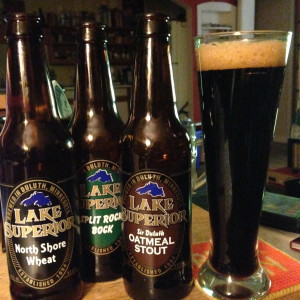 I started my Lake Superior journey with North Shore Wheat. Well, it started out nicely, pouring that beautiful lazy, hazy golden amber that you expect from a wheat, topped with a dense white head of tightly packed bubbles that persistently cling to the glass with each sip.

And each sip was a meaty, beaty, big and bouncy slice of wheaty goodness. Something nice and chewy about this wheat. Nice dose of cloves submerged in the meatiness.

Next, Split Rock Bock. Love the name, just as I used to love the drive up the North Shore to Split Rock to pick wild blueberries and hop around on the rocks, which was especially exhilarating on foggy days in a particularly dexterous pair of Dexter shoes.

Split Rock Bock pours an intense inland lake brown. The color reminds me of Island Lake, where my grandparents first had a summer home and then a year-round home. Even as a kid I thought the water of Island Lake looked like beer, but I didn’t know it was bock beer. Never heard of it back then.

The taste is deep malty sweet biscuit, with just a bite of alcohol on the end. The alcohol is in the nose as well, which is fine by me. Lovely depth of darkness on the tongue. It’s Split Rock sans lighthouse – nothing but deep and mysterious darkness. This is an authoritative bock.

Finally, the one I’ve been waiting for all along, Sir Duluth Oatmeal Stout. As a native Duluthian, I was stuffed with tales of Daniel Greysolon, Sieur du Lhut, who eventually lent his name – last name only, thankfully – to the city.

Impenetrable black, it pours, reminding me of my favorite Dylan Thomas line, the first lines to the opening of his play for voices Under Milk Wood, “It is Spring, moonless night in the small town, starless and bible-black…”

The taste has that soft sweetness you expect of a stout that has been brewed with oatmeal. Oatmeal is grandmother incarnate, calming everything down a little a bit just by her soft presence.

Not to say this is a tame stout. It has a big dark presence – espresso and the darkest of chocolate – that even the kindly oatmeal can’t tame. I salute you, Sir Duluth!

All three of these were nice, clean beers, just as you would want Lake Superior beers to be. I think they live up to the name.