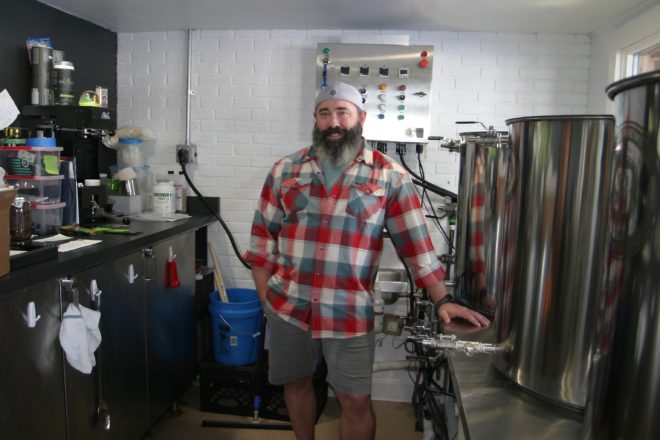 Trent Snyder is the head brewer at Bridge Up Brewing at Sonny’s Pizzeria in Sturgeon Bay. Photo by Jim Lundstrom.

Bridge Up Brewing Company – a one-barrel nanobrewery at 129 N. Madison Ave. in Sturgeon Bay – is expanding its reach within Door County and its footprint.

After operating for a little more than a year, Bridge Up has partnered with Flanigan Distributing to release its three flagship offerings. The three beers that will be available at outlets around the county will be Bridge Up’s Knee-High Cream Ale, 1851 Zwickelager and Escarpment Citra Pale Ale.

With help from Portside Builders, Bridge Up will also be opening a new, 1,000-square-foot taproom and brewery in the lower level of Sonny’s in time for summer 2020. It will source barnwood from around the county, tie in other local materials and feature an eight-to-10-seat bar, several tables and a lounge section with comfortable couches and chairs. Patrons will regularly be able to choose from eight to 10 beers. To keep up with the taproom’s progress and learn more, visit facebook.com/bridgeupbrewing.