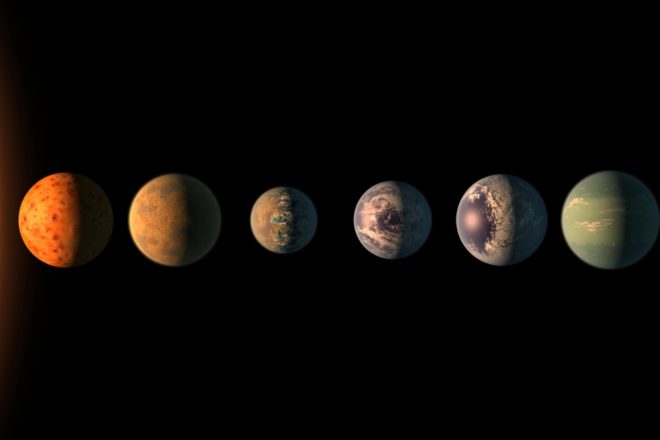 The sequence of events that led to his winning this award in my mind began on the afternoon of Feb. 22 with an amazing email blast from NASA about the discovery of a solar system with seven planets.

“Our Spitzer Space Telescope has revealed the first known system of seven Earth-size planets around a single star. Three of these planets are firmly located in an area called the habitable zone, where liquid water is most likely to exist on a rocky planet,” NASA said. “This exoplanet system is called TRAPPIST-1, named for The Transiting Planets and Planetesimals Small Telescope (TRAPPIST) in Chile. In May 2016, researchers using TRAPPIST announced they had discovered three planets in the system.”

The next day is this brilliant email from Hartinger:

“An international team of scientists led by an astronomer from the University of Liege in Belgium announced yesterday that ultracool dwarf star Trappist-1 – relatively close to our sun at 40 light years, or 235 trillion miles – has seven planets orbiting it, some of which may have similarities to Earth. There’s speculation about life on one or more of these planets, but there is no doubt that there is life in every bottle of Trappist ale from Orval, Rochefort and Westmalle: they are bottle-conditioned with live brewer’s yeast.

“Meanwhile, celebrate this announcement by toasting with a Trappist ale from Orval, Rochefort or Westmalle. Find U.S. retailers with our online beer search at merchantduvin.com/find-our-beer.php.

With it came an image playing on a NASA image of the seven planets.

My hat is off to you, Craig, for seeing the possibility in that NASA news release and then totally owning it with your completely unique lineup of Trappist ales. Beautiful! Genius!

It makes me want to rush out to buy a Trappist ale, crack it open and ponder the possibility of life on the Trappist-1 planets.