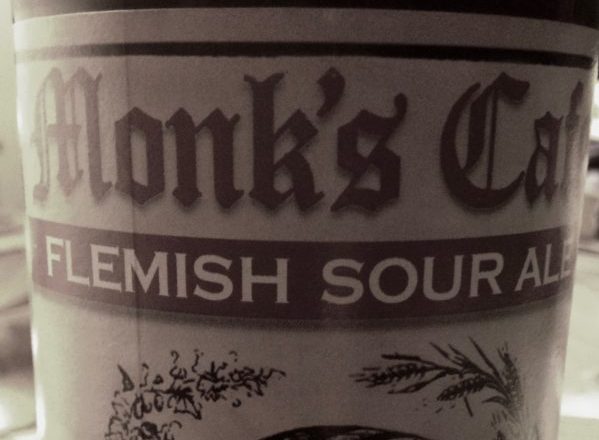 I’ve always been curious about a beer called Monk’s Cafe, a Flemish sour ale from Belgium. Every beer lover has heard of Monk’s Café in the Pennsylvania city where it’s always sunny – Philadelphia. I thought there must be a connection, but it was only recently that I finally picked up a four-pack.

This beer pours brown with a bubbly tawny head that quickly settles down to what appears to be a mostly still brown beer. However, the light occasionally catches it in such a way that it appears tinged with red, pink and orange.

The taste is, uhm, let me see, I think I need another taste. Hmmm, yes, the taste is, uhm, well, perhaps another sip. Yes, that’s it, the taste is exquisite. Lush. Luxurious. A refreshing sweet/tart presence. This beer tells your mouth and senses that you are rich, and for a moment even your brain believes it, despite that it also knows about the $40 overdraft and subsequent $26 stropping by the credit union.

This might be an excellent introduction to sour beers for the uninitiated for the tartness of this beer is subtle yet contributes hugely to the rich and satisfying mouthfeel of Monk’s Cafe. It might even be enjoyed by a red wine drinker unfamiliar with exotic beer. This style of Flemish ale is considered about as close as you can get to a winey beer.

There is a connection to the Philadelphia-based Monk’s Café and this beer from the Belgian brewer Brouwerij Van Steenberge.

Monk’s Café in Philly is known to beer lovers because it was founded to serve Belgian beers and food cooked in those beers. It’s one of those places beer lovers have down as “I’m going to get there someday.”

In 2002 owner Tom Peters went to Belgium and the Van Steenberge Brewery to ask if they would bottle their brown sour, a beer they have been making for 300 years, a blend of young and old ales aged in oak, as a private label beer for his cafe. It’s been such a success that you no longer have to go to Philadelphia for a Monk’s Cafe.

Until then, this beer will just have to do.