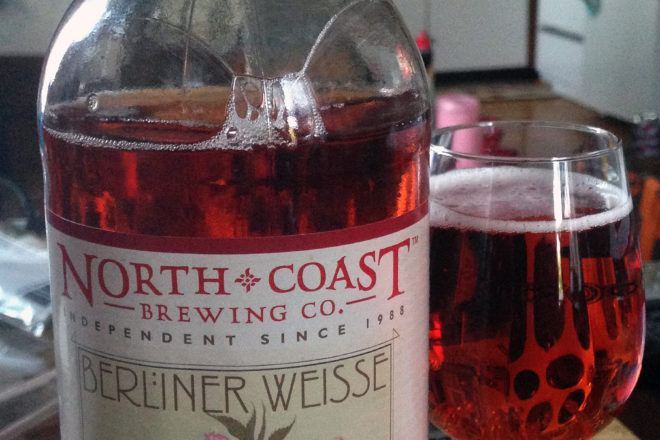 This beer has been calling to me for weeks. I probably bought it three months ago and tucked it deep into the magic fridge, but it was not forgotten.

It’s just that tonight the magic fridge coughed it up when I went looking for something to sample. I never question the magic fridge; I just follow its lead and hope that it means well. It has so far.

The beautiful cherry blossom label on this beer makes me think of a term coined by a French art critic in 1872 – Japonism, a mid-19th century craze that included collecting Japanese art and, in the case of some Western artists, emulating the clean, crisp Japanese style. When looking at this label, my mind goes to James Abbott McNeill Whistler and his adoption of Japanese artistic principles. Unfortunately, he’s largely only remembered for painting his very un-Japanese mother.

Ah, enough art history. Back to the beer.

The clear bottle displays an inviting rose-colored liquid, which pours with a carbonated flourish that quickly turns into a big pink head, and just as quickly dissipates into a thin pink ring, like something the Cat in the Hat left behind in your bathtub.

What we’re talking about seems rather unique for the North Coast Brewing Co. in Fort Bragg, Calif., which also makes the legendary Rasputin Russian Imperial Stout, as well as Old Stock Ale and Brother Thelonious – big, bold beers, one and all. This is North Coast’s Berliner Weisse brewed with Montmorency cherries (from Michigan, dammit!).

Berliner Weisse is already a tart beer. So you’d think this would be a high alert on the tartness scale, but, no, in strange ways the tartness is subdued in place of the delicious flavor of the great Montmorency cherry.

It is a very beautiful thing. The color is amazing. The taste is light and refreshing. I can think of many foods I could drink with a bomber bottle of this superb beer, anything you might consider for a rose wine – grilled cheese, mushroom quiche, roasted beet salad, anchovy pizza, deep-fried fish and, what I plan to concoct shortly, a bacon cheeseburger with lots of Vidalia onion, both fried and sliced fresh.

If you want to know where to find this beautiful Berliner Weisse, North Coast’s website has an excellent beer finder (northcoastbrewing.com/beers/beer-locator/). There were four locations identified within 10 miles of my abode, which bodes well for someone in a more populated place, I would imagine.