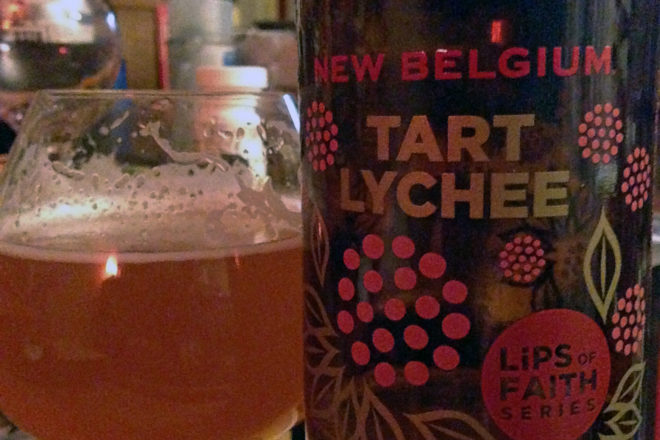 Thank you New Belgium Brewing for your Lips of Faith Series. I must admit the Tart Lychee did not call out to me at first, but when I finally picked up a bottle and had my first taste, I wished I had more. I wish I had it all…mwah..hah..hah!

The tartness is lovely. The flavor is refreshing. The combination is intoxicating. My mouth is so alive with this happy, happy juice in it. I wish I could jump in and stay drunk all of the time.

Or the great one from Dylan when he meets The Beatles in 1964 and wants to smoke pot with them, only to learn they are virgins, which surprises him because of their song “I Wanna Hold Your Hand,” where he thinks they sing “I get high.” John had to sheepishly explain the words are “I can’t hide.”

Well, I just had my own experience. Ever since I first heard Canned Heat’s single “Goin’ Up the Country” in 1968, which I paraphrased a piece of above, I thought this was the first line:

“Goin’ up the country, where the mari-jew-ana grows.”

All these years, I thought it was a declaration. But recently I learned it is a question, as in:

Well, in my defense, I maintain Canned Heat singer Alan “Blind Owl” Wilson’s falsetto enunciation on that line is as garbled as Trump’s infamous failed dental plate speech on Jerusalem.

And I am not alone. With just a cursory online search I found others who heard it as I did, such as this one from a misheard lyrics website. In fact, this response by “Egbert Souse” (W.C. Fields’ character in the 1940 film The Bank Dick) sounds too much like me:

“All these years, I thought Canned Heat was singing about ‘marijuana.’ When I heard the song recently in a commercial for Tide detergent, my jaw dropped. I thought, ‘Tide and marijuana, now those are some grass stains!’ I just couldn’t believe my ears. I told people to listen for the commercial. Then I decided to look up the lyrics and found I’ve been mishearing them for more than 30 years. Submitted by: Egbert Souse”

It seems like a whole different song now. The realization makes you start questioning everything. What else have I gotten wrong?

Well, let me dive back into this beer to forget my worrying mondegreenism.

There’s a mysteriously intriguing spiciness riding high on top of the lychee fruitiness that I can’t identify. I had to look at the label, and to my shame I read that it is cinnamon.

What’s going on? I’ve had the lyrics wrong to the Canned Heat song for almost 50 years and I can’t identify cinnamon in a lychee beer.

So, I take a big whiff of the beer, and then a big, round sip that I hold on my tongue until I can feel the effervescence tingling each papillae.

OK. I’m better now. This is a great beer. That’s all that matters.

And it’s too late now to change the lyrics of that Canned Heat song, so for me it will always be…

“Goin’ up the country, where the mari-jew-ana grows.”