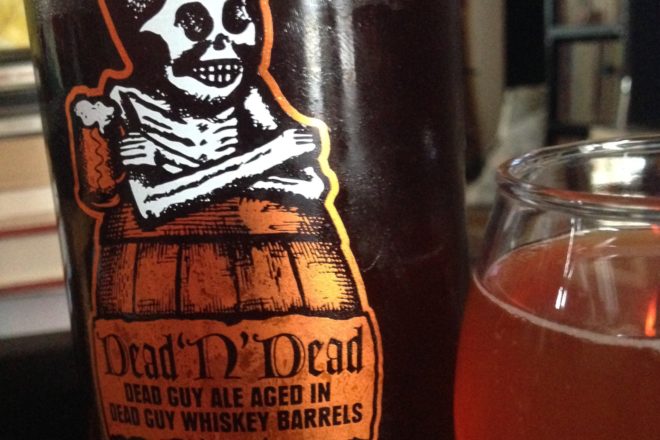 If you love great beer, I suggest you hurry to your local beer emporium and buy as many bottles as you can afford of the fall seasonal Dead ‘N’ Dead from Rogue Ales. Yes, it is that good. And it comes in a bomber bottle with a glow in the dark label (a trademark of Dead Guy Ale since 1996).

Details are hazy now, but I seem to recall the original Dead Guy Ale came with a tie-dyed label, and I believe the very first time I tried one, bombers had just arrived at a place I frequented back in the day, the Lizard Lounge in Oshkosh. It was Wednesday, Aug. 9, 1995, when I tasted my first Dead Guy Ale, which I remember because it is also the day Grateful Dead guitarist Jerry Garcia died in a rehab facility. Yes, I know a weird, synchronicity, but, there you go. Perhaps I should add that I was never a Deadhead. However, I have many recordings of Garcia in bluegrass mode with various people, but especially with mandolinist David “Dawg” Grisman.

But, back to this fantastic beer. Dead Guy Ale has long been an icon of pioneer craft brewery Rogue Ales of Newport, Oregon, which is kind of funny for a brewery that chooses the word “ale” in its name when its most famous beer is a lager, a Maibock.

Maibock has long been one of my favorite beer styles, with the Kirby Nelson-era Capital Brewing’s Maibock holding a very special place.

But, honestly, I had forgotten that Dead Guy Ale is a Maibock, and it has been a while since I’ve had one. On a recent trip to my local beer emporium, where a display of the fall seasonals had been set up, the tankard-holding skelton in a barrel on the label of Dead ‘N’ Dead caught my eye, and my hand responded immediately by reaching for a bottle.

Thank you eye-brain-hand for working in coordination and without hesitation to bring this lovely bottle of beer home.

For me, Maibock’s appeal is the rich, warm malty viscosity it imparts. There is even more of that evident here in Dead ‘N’ Dead, where the Maibock has been aged in whiskey barrels, giving it an even deeper warmth. Regular Dead Guy Ale weighs in at 6.8 percent alcohol. Dead ‘N’ Dead steps it up to 8.8 percent.

After an early fall sampling of a variety of luscious Oktoberfests, if I were pressed to pick my favorite fall beer, I can now say without hesitation Dead ‘N’ Dead.