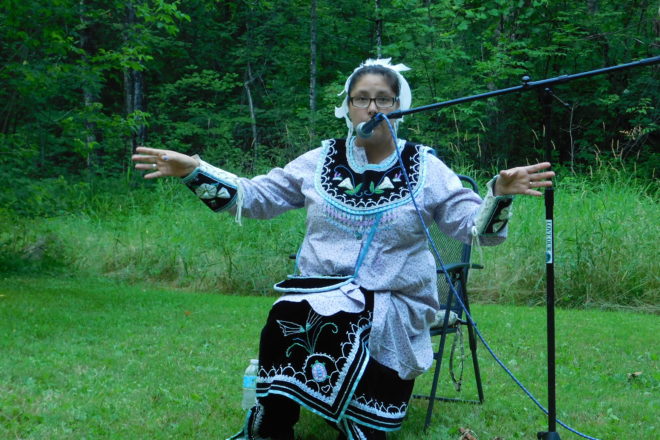 Kaluhyak^le in her modern traditional outfit. Photos by Jolynn Nelson. 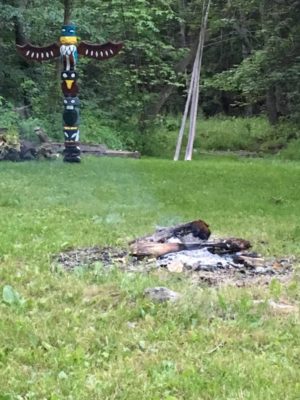 The storytelling series takes place in the Oshkosh mini-bowl.

Chief Oshkosh was a Menominee chief and the original owner of the shop and mini-bowl. He became well known for the powwows he staged at the amphitheater behind his cabin and trading post, which included drumming, singing, dancing and Menominee ceremonies. The storytelling series brings the mini-bowl back into commission and introduces Door County residents and visitors alike to the rich oral traditions and heritage of the Oneida and Cherokee people.

As July 16 was the first night of the storytelling series, Kaluhyak^le began by describing the Sky World, which existed before the earth. Kaluhyak^le followed the life of Sky Woman, who searched for her celestial partner and ignored those who tried to distract her. But due to an unfortunate accident (or perhaps a jealous husband) Sky Woman fell from the Sky World down toward the Water World.

The water birds caught her on their backs and placed her on the back of a giant sea turtle, which became the earth. She gave birth to a daughter, who in turn gave birth to two sons. One of the sons, known as Flint, came out of his mother’s side, killing her. The other was Right Son. Right Son was given the power to create things. He made delicious raspberries and strong maples that would produce sap for syrup. He became known as The Creator.

Flint grew jealous, so he began to create as well. He made apple trees that were gnarled and ugly and made thorns grow on the raspberry bushes. Eventually Right Son noticed Flint’s creations and grew angry. He told Flint to stop, that he was upsetting the world’s natural balance, but Flint replied that he would only quit if Right Son won in a fight. They battled, and Right Son won. But he does not kill his brother. He knows that everything in the world has a purpose, and that includes his brother. Right Son comes to see the balance Flint’s creations provided: the gnarled trees provided the most delicious apples, and the raspberry plants would be able to protect themselves and reproduce. There could be a balance between the two brothers.

The telling of the story has a natural flow from one generation to the next. Each generational story relays a different message but the familial element adds cohesiveness to the story.

Kaluhyak^le explained that this generational model of storytelling emphasizes the importance of women in Iroquois culture. Often when this story is taught in high school or college classrooms, emphasis is placed on Right Son and Flint, and little attention is paid to the three generations of women who came before. This part is often left out or considerably shortened by editors.

“I think a lot of that comes from paternalism,” Kaluhyak^le said. “[European authors writing down these stories] didn’t value the beginning part and the woman’s role in it, which is so huge to me. I think they wanted to have a god, and so they focus on this man who created stuff. Our culture is matrilineal and so the most important thing – really why it’s matrilineal – is because it starts with those women up there. They cut that part out but to me it’s so important, the idea that [Sky Woman] is going to create this life, so she has to choose specifically the right guy.” 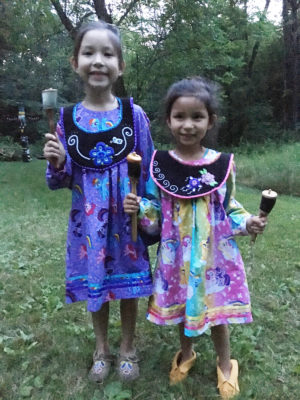 Two of Kaluhyak^le’s daughters pose for the camera.

She indicated her youngest daughter, who sat through the performance with her father, grandmother, and other siblings. “When she was still in my belly, she got all of her eggs. So essentially, all of my grandchildren I created in her,” she said. “So that’s how we work: in that very important three.”

The storytelling also offers an opportunity to experience other elements of native culture. Kaluhyak^le shared one of the woman dance songs, which have been passed down from Sky Woman and then from generation to generation. Kaluhyak^le’s mother danced along to the music, shuffling her feet and moving in a counterclockwise circle.

For the telling Kaluhyak^le wore modern traditional Oneida style of dress with beautiful beadwork. Originally, all of the beadwork was done in white, Kaluhyak^le explained. The style grew more colorful after European contact.

“And we actually go into that in our stories,” she said. “We start with our creation stories and then go into a story called ‘The Peacemaker.’ Along with that story is all types of symbolism, and it is that symbolism that goes into a lot of our outfits.”

The Creation Stories program will continue every Wednesday and Saturday through July. Each night includes different stories from either Oneida or Cherokee tradition. Stories begin at 7:30 pm in the mini-bowl behind Chief Oshkosh. Chief Oshkosh is located at 7631 Hwy. 42 in Egg Harbor. For more information call 920.868.3240.