My interest in birdwatching and keeping good field notes began in the spring of 1951. One of my biology classes was taught by the aging and venerable Dr. Hugh Talbot. He was an excellent teacher and left lasting memories of learning and enjoying biology in the field. One requirement was to attend several early (5 am) birdwatching classes, which Dr. Talbot couldn’t teach himself because his hearing was so poor.

Fortunately his assistant was an excellent birder and emphasized learning the songs and even some of the birds’ chip-notes.

By the time I had been drafted into the U.S. Army Field Artillery (1953-1955) my interest in birds had really soared and I soon realized I wanted to become a reputable birdwatcher. I became firmly hooked as a birder when I saw my first Scissor-tailed Flycatcher at the Fort Sill Field Artillery Center where I was stationed with the 280 mm. Atomic Cannon Unit.

I began teaching in Madison immediately upon receiving my honorable discharge from the U.S. Army in 1955. What I soon learned was that Madison had many active and excellent birdwatchers and counters, and it was then, as a member of the Madison group, that I learned about the Christmas Bird Counts (CBC). Naturally I also became a participating member of the Wisconsin Society for Ornithology (WSO) but couldn’t help with the Madison CBC’s because I was home for Christmas vacation with my parents and family in Kewaunee.

It was in 1958 that I convinced my good friends and birders Elmer and Millie DeCramer to do what I listed in my birding record book as our first CBC for the Kewaunee area. The count was taken on Dec. 28 with the temperature in the 40s, and the springs along the Kewaunee River were open and flowing.

Our main hike of the day, which was several miles in length, was concentrated upon an area along the winding Kewaunee River. Several large stretches of the hike took us through beautiful mixed hardwoods but we also spent time in the large sweeping fields somewhat away from the river but still in sight of it. We watched several dozen Pine Siskins, lifers for the three of us, extracting seeds from Eastern Hemlock cones near the cabins along the river. We guessed that we may have been the very first humans these birds had encountered, judging by how close (within 10-15 feet) they allowed us to approach them. What a great way to see a lifer, a bird seen for the very first time by that particular viewer!

I did a second CBC in 1958, helping friend John Kraupa of Two Rivers. We were able to come up with 24 species on that clear cold day (10 degrees F.). By far the most exciting species, a lifer for me, was the Bohemian Waxwing. A flock of nine was seen feeding on Wild Grapes immediately north of Point Beach State Forest, right along the Lake Michigan shore. We watched them with my B&L spotting scope, with a 20X eyepiece, for 20 minutes – how tame, how beautiful and immaculately groomed and very bold appearing. What an ideal way this was for adding a lifer to one’s bird list.

One of the most thrilling lifers on my list was added on Christmas Day, 1958 with my 20X spotting scope set up in my parents’ kitchen, right in front of the north windows. I saw a large gray bird in the Bittersweet vines on the trellis below the kitchen windows. At first glance I figured that it was a Blue Jay – then soon realized that it wasn’t. The first thing I thought of was a Northern Shrike, or a Canada Jay. Just about then it flew down to a lower branch of the lilac bush and flashed its white wing patches for me. 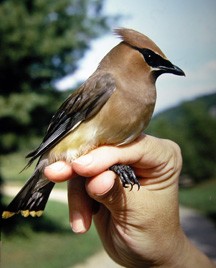 The more common Cedar Waxwing nests in Door County and often remains in the area into early winter. Both have been seen in Northern Door recently.

Then I realized I was watching my first Wisconsin Mockingbird. Its tail was entirely white below and on the margins, and the bird would continuously cock it at an angle above its rump. Soon it flew into our neighbor’s apple tree (loaded with frozen apples) and proceeded to peck at one apple for about 10 minutes. I was able to approach to within 30 feet with my 20X Balscope Sr. spotting scope and watched it continuously while it fed. Its eye was distinctly yellowish-orange.

Harold Wilson of Ephraim and I did many of the CBCs together, including that of Dec. 27, 1963 when we lucked onto a large flock of Common Redpolls. What was of interest to me was watching and counting several hundred Herring Gulls as a stinging below-zero wind whipped at us from all directions virtually causing our teeth to chatter. What a change from our banding several hundred of the gulls on a 90 degree F. day in late June, fighting midges and mosquitos constantly and trying to think of something much most pleasant that we could be doing at the moment! Such is the life of gull banders!

Our 1965 Ephraim CBC turned up a total of 1,670 birds including 1,055 Herring Gulls, 267 Am. Goldeneyes, 64 Black-capped Chickadees and 75 Evening Grosbeaks. Dating back to our first count in 1958, Evening Grosbeaks were observed in 32 of the years, and not seen in 17 of the years. They have not been seen on Door County CBCs since 2007, for the past seven years. Word from the experts is that there is a gradual shift of wintering Evening Grosbeaks eastward on the North American Continent.

I think back to the years of 1967 into the early 1980s and recall our having as many as 200 at my several feeders and on the ground below at one time. Little wonder that we bought forty-four 50-pound bags of sunflower seeds in one winter! We referred to them as our gluttonous Evening Grosbeak friends!

We always hope for good weather for each Christmas Bird Count as many birders canvass the countryside in search of rare birds while others watch their feeders and tally the greatest number of each species seen at one instant. It is an annual winter ritual that appeals to avid birders all over the United States.