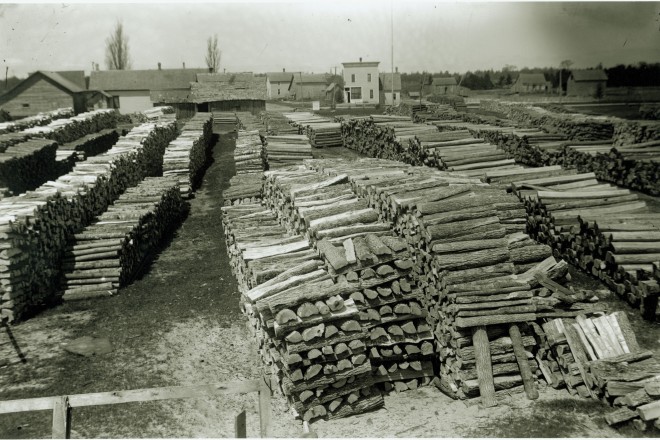 More than a century ago, just as today, the splendor of Door County’s natural resources attracted droves of people to the peninsula. But in the last half of the 19th century, they came not to appreciate and relax, but to chop and clear the area’s towering virgin forests.

When Door County was established by the state of Wisconsin in 1851, it was blanketed with a thick coat of forests that would soon attract the attention of enterprising lumber barons. Until then, the Door County logging industry consisted of individual farmers and their families clearing land in the hope of starting a new life.

Beginning in 1853, Belgian immigrants flooded into the Southern Door area and began the painstaking process of clearing the heavily wooded landscape one tree at a time. In the latter part of the decade, small lumber companies began appearing throughout the county in the form of mills, logging camps and settlements in Little Sturgeon, Rowleys Bay, Egg Harbor, and Fish Creek. But it wasn’t until the end of the Civil War when the industry exploded and the basis of the peninsula’s future economy and culture was born.

With the war over, American settlement and economic expansion could continue. Railroads would need ties, telegraph lines would need poles, and most pertinent to the county’s fortunes, two great Midwestern cities would rise along the southern banks of Lake Michigan.

Chicago and Milwaukee needed lumber to construct homes and businesses and shingles for their roofs. After the Chicago Fire in October of 1871, the demand doubled. The towering white pines of Door County that stretched well over 100 feet into the sky were soon coveted, and the abundant cedars along the shores would find new homes as rooftop shingles.

The easy access to water made it an ideal location for enterprising businessmen to set up sawmills. Overland transportation of lumber was impractical — water was the only way to move mass quantities of wood great distances. The miles of shoreline surrounding the county spurred the establishment of camps and piers up and down both sides of the peninsula. By 1880, no less than 60 piers had been built for the purpose of shipping lumber; some stretched over 1,000 feet into the lake.

Logging camps would spawn settlements of hundreds and even thousands with names like Boos, Lily Bay and Little Sturgeon, only to retract or disappear entirely when the last trees were chopped. The town of Jacksonport would grow around the sawmill of Joseph Smith, the “Cedar King of Door County.” In 1879, Smith shipped 79 cargoes of cedar, and the town briefly grew into a settlement of nearly 2,000 people. But when the trees became scarce, the people did as well, with 852 people moving on in 1882 alone.

While Door County may have had the perfect geography for shipping, the work was far from ideal. The forests were thick and so were the trees, with many three to four feet in diameter and sometimes wider. The first power tools wouldn’t appear until the 1880s, nor would the two-man  saw. The chopper, as the tree-feller was known, would begin harvesting the billions of trees with an axe.

The logger of the era was often reminded of his life’s fragile nature. Errant limbs, called “widow-makers,” sometimes came crashing down upon an unsuspecting co-worker. A tree-chopper would misjudge his cut and send a towering pine falling the wrong way and crush the strongest of men. A man assigned the routine task of breaking up a logjam on a river or lake might feel himself slip one moment and find himself crushed between the logs the next.

These tragic workplace accidents left little time for pause, however, as described in Paul and Frances Burton’s book, Door County Stories. “A fatal accident was followed by a quick, on the spot burial, with the boots of the deceased hung on a nearby tree as a memorial. Then back to work.”

As death was cold, so was the work, for winter was the prime season for logging. Horses, mules, and oxen had to pull huge loads of felled trees to sawmills on the shore, and this was much easier on snow and ice than dry land. Workers called swampers were often charged with watering down the roads to turn them into ice, thus making the sledding quicker.

Medicine in the camps was even more primitive than the roads. Diseases such as typhoid, smallpox and cholera were not uncommon, and a diphtheria outbreak altered the future of Sister Bay in 1865. A ship carrying an entire crew sick with the disease pulled into the then-thriving logging town at Little Sister Harbor. Soon all but one would be dead and quickly buried in a makeshift cemetery not far from what is now Pebble Beach. The community would be quickly abandoned, and the village of Sister Bay would soon grow two miles up the shoreline.

Where many logging camps once stood one can find luxurious accommodations today, but a lumberjack in 1875 could not have imagined what his labor would one day bring. He worked long days, only to sleep packed like a sardine in camps where the snoring came “in seven different languages,” as N.K. Risjord quoted a young logger’s letter in Wisconsin, the Story if the Badger State. The camps had no running water or bathroom facilities, and the logger endured all of this for little more than a subsistence wage.

Some lumberjacks came from Eastern states, but many more were recent immigrants with dreams of a new life in a peaceful land. They came from Sweden, Belgium, Germany and Norway. They wanted to farm, but the forests were thick, and for many, the sawmill was the only opportunity to get a start in their new home. Banks would not exist on the peninsula until the turn of the century, leaving the mills to fill this void as well.

Settlers would work as loggers or take out what amounted to a mortgage through the sawmill. In such agreements, men were given jobs as loggers, or settlers were given land which they would clear of trees and bring to the sawmill. A typical settler would get supplies from the sawmill’s general store on credit, and at the end of the year would be paid the difference between the price of his supplies and the value of the wood he had harvested or wage he was owed.

Such a system gave the lumber company a stable and loyal workforce and enabled the worker to survive when he had no money. This system, and the logging industry, dominated the Door County economy from 1870-1890, but the finite reality of the forests meant that it would soon disappear.

As the end of the century approached, the forests were dwindling and the eyes of the lumber industry fixed on Upper Michigan, western Wisconsin, and even as far west as Washington state. The days of the lumber industry dominating the county were over, and the people left behind looked about them and saw an open landscape where the thick forests had stood. The sun shone upon the open soil, and former lumberjacks began building barns and planting crops.

Orchards would spring up throughout the peninsula and become not just an industry, but a defining symbol of the Door. A few enterprising businessmen saw the future and turned old logging camps into resorts and cottages, and the piers that once served as depots for cordwood, shingles and lumber would soon serve as drop-off points for droves of tourists on summer getaways.

When the last days of lumber industry dominance had passed, the toil of its laborers had unknowingly left the groundwork for all that Door County is today.

The loggers that swarmed Door County in the late 1800s didn’t leave many trees behind. However, you can view some trees that were spared the axe on Toft’s Point in Baileys Harbor. The 740 acre point includes one of the largest continuous stretches of old-growth white pine on the entire western shore of Lake Michigan.

The Toft family resisted the temptation to log the point and reached an agreement with the University of Wisconsin and The Nature Conservancy to preserve the area in perpetuity. It is now part of The Ridges Sanctuary and is accessible throughout the year via Ridges Road.