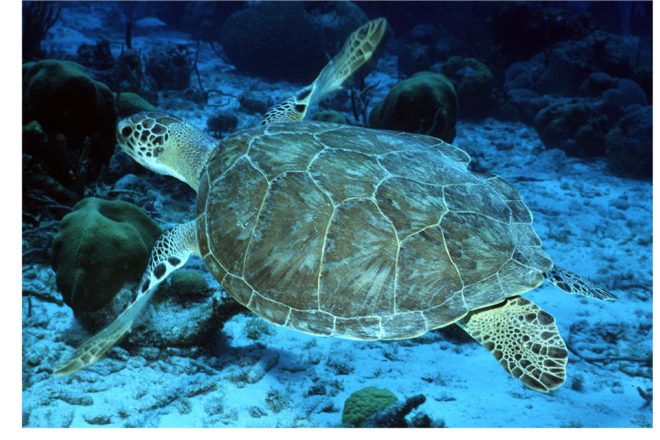 Climate change is threatening the male population of green sea turtles. Photo courtesy of the NOAA.

Many of us have read graphic accounts of how climate change is already contributing to significant problems such as intensifying severe weather events, rising sea levels, increasing threats to human health and adverse impacts on biodiversity. There are many other stories – some positive and some negative – that most of us know nothing about. Here are a few relatively unknown examples that our changing climate is already, or perhaps may soon be, responsible for causing.

Green sea turtles are marvelous creatures that can live for 60 to 70 years and spend their entire lives at sea except for the females who once a year return to the beaches of their birth to find mates and lay eggs. Here’s the climate change connection. The sex of green sea turtles is not determined by chromosomes, but by the temperature outside the egg. The critical or pivot temperature is 85 degrees Fahrenheit. A few degrees below that and all turtles are born male. Heat the eggs only a few degrees and only females are born.

Some sea turtle populations are already so skewed that 99 percent of the young are female. That is not a recipe for long-term turtle survival. Temperatures similarly influence the sex determination of other reptiles. The bottom line is we appear to be on a path to losing beautiful green sea turtles and other amazing reptiles if we don’t take steps to mitigate climate change.

The good news is that after two years of multinational meetings, the five nations with Arctic coastlines, including the United States and Russia, and other nations with fishing fleets interested in operating in the region, have reached an agreement to place this area off-limits to commercial fishing for at least the next 16 years. This is a wonderful example of placing science before business – of waiting to start commercial fishing until there is enough science and management in place to ensure a sustainable fish harvest.

The nations are working on how the program will be funded and managed. The agreement will renew automatically every five years unless a country objects or until science-based fisheries quotas and rules are in place.

Also, looking to the Arctic where climate change has had the most dramatic effects so far, we are facing a massive potential scrambling of genes among native creatures due to a warming of habitat. For example, we know polar bears diverged from grizzly bears many years ago. Global warming threatens to reunite the two species, lessening the biodiversity which makes nature so amazing. In short, we may lose polar bears as they become reabsorbed by mating with the more numerous grizzly bears who are now moving north.

When the Trump administration first proposed slashing science budgets and then pulled the United States out of the Paris climate accord, French President, Emmanuel Macron responded for all of us by announcing a “Make Our Planet Great Again” competition for research grants to address climate change to be awarded for up to five years in duration.

In December 2017, the French government unveiled its first list of 18 French “laureates.” Of the 18 people recognized, 13, including a few French nationals, work in the United States. Others are based in Canada, India, as well as in Europe.

The French will announce a second round of winners this spring, together with Germany, which joined the initiative with a substantial financial commitment. Our administration, and the EPA in particular, are swimming against the tide.

Australia is taking a puzzling set of actions. Already the world’s largest exporter of coal, the Queensland government has made plans that would double its coal output by opening a massive new mine, the country’s largest, potentially followed by at least eight more new mines.  Conversely, after a five-year-long community campaign, two coal stations in South Australia will be demolished and replaced with the world’s largest solar plant – a monumental tower surrounded by a vast field of mirrors. The plant will store heat in insulated tanks of molten salt and is projected to be running in 2020.

As the market demand for coal continues to decline in Asia as it is in the United States today, perhaps Queensland will see the light that is shining in South Australia.

So, is the future outlook for a livable climate good or bad?

Perhaps the best commentary would be to call the future hopeful, provided that we act to stop burning fossil fuels that release heat-trapping gases into our atmosphere and greatly expand carbon-capturing forests, prairies and agriculture.

Save the Date for Climate Change Forum

The fifth annual Door County Climate Change Forum will be held May 19, 9 am to 2 pm, at Stone Harbor Resort in Sturgeon Bay. Programs include:  “A Risky Climate for Cranes, Wetlands and Our World” with Rich Beilfuss, International Crane Foundation CEO & president; “Making the Transition to a Clean Global Energy System Through

Dick Smythe and his wife Mary live in Sister Bay and are also on the Climate Change Coalition steering committee. Dr. Smythe spent his professional career with the U. S. Forest Service, first as a research scientist, then in a series of administrative positions. His final position was Director of Wildlife, Fish, Water, Soils, and Atmospheric Science Research for the Forest Service in Washington, D. C.