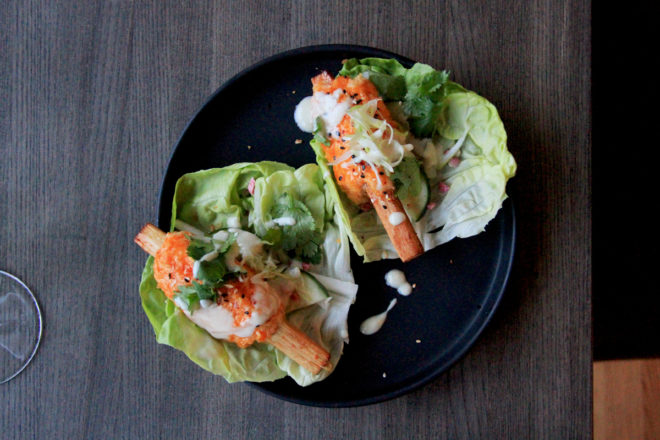 The shrimp chao tom from the seafood section of the menu. Photo by Aleah Kidd.

Baileys Harbor is now home to Clover & Ash: a new restaurant and pub from the Wild Restaurant Concepts group. Starting up in what was most recently the Yum Yum Tree, a candy and ice cream shop, the new lunch and dinner location officially opened its doors to the public Jan. 12. Owner Britt Unkefer took the lead on imagining the space’s new design, combining elements of mid-century modern and industrial design for a contemporary feel.

Remodeling kicked off in the spring and lasted about nine months, during which time the entire building was gutted to the studs.

“The only thing that didn’t change is the floor and the ceiling,” Unkefer said.

The building was erected in the 1890s as the Clover Farm Store grocery store, which inspired, in part, the new name. The store was part of the same chain as Ellison Bay’s Pioneer Store, and Unkefer said that Door County Advocate ads for the shop can be traced back to the 1920s.

The front of the building needed reconstruction, and the back additions – which were put in place sometime in the ’40s – were removed to open up a larger outdoor area for patio seating and to allow for a picture window to frame the lake view through the back wall. The property extends to the Lake Michigan shoreline, and once landscaping is completed this spring, the patio area will be an extension of the dining space, offering seating closer to the water with firepits and Adirondack chairs.

The building’s history inspired the “Clover” part of the name, but the “Ash” part refers to an unusual detail of the décor: The wood detailing on the walls and bar was created using a Japanese wood-firing technique that turns cypress boards completely black and gives them a charred appearance and texture. It creates a stark contrast with the lighter wall colors and long, white marble bar.

“At first glance, the space does have a fancier appearance, but it’s really not that type of dining experience,” Unkefer said. “The experience is meant to be casual and relaxing. We want you to come hang out and relax.”

The space is split down the middle by a large bar that seats 13 with plenty of bar-top room to dine, share food and socialize. The other half of the space offers seating with ash-colored butcher-block tables that fit groups and pairs, plus a larger communal dining table at the back. Dining is first-come, first-served.

From the start, Unkefer had a clearly defined vision of what the interior of the space was to look like, and the design has come together flawlessly. The walls feature a trio of textures, including the fired cypress alongside a custom wallpaper that shines with the Clover & Ash logo. The lighting fixtures use brass and black metal with globe lights to evoke a bit of mid-century detail, and the bar seating uses black, high-backed, padded chairs that encourage patrons to settle in.

Sleek, big-screen TVs adorn the space above the back bar and add to the ambience by playing classic, black-and-white movies – but music plays instead of the film dialogue to create an atmosphere for socializing. “You won’t have to watch any commercials,” said general manager Ryan Dimmitt. “We have the TVs for conversation starters and to match the mood.”

You’ll also notice that wine is stored in climate-controlled coolers at the front of the space and behind the bar.

“All of the wine we serve is chilled at the appropriate temperatures,” said Dimmitt, who developed the wine list. “Even the reds. Reds are generally best served at around 55 degrees, which is cooler than what is usually offered elsewhere, where bottles are kept at room temperature.”

“The wine list is very food friendly,” noted Unkefer. “That’s what you’ll find with European wines in general: They are meant to be enjoyed with food.” The list also includes several ports, vermouths and Madeiras for aperitifs or to be enjoyed after dinner.

On the menu, Chef Luke Boss aimed to appeal to the palates of people in the area while also filling a desire for certain flavors, ingredients and cuisines that aren’t currently found in Northern Door.

“I really wanted to just make a menu with food that we [the staff] like to eat, and at the same time, differentiate ourselves and find our niche,” Boss said.

Items such as From the Forest, with seared venison; and the Kraken, with braised octopus, are dishes that Boss hopes diners will be willing to try.

“They use unique ingredients, and I think if people are willing to try them, they will love it,” he said.

There are a couple of bowl options that are expected to become favorites, including the Godzilla Bowl, made of black rice, tropical fruit, tuna and salmon ceviche; and the Yellowfin, comprising Asian greens with mango, avocado and yellowfin tuna, plus a finger lime kimizu: an egg and rice-vinegar dressing.

For starters, there are three very shareable appetizer boards that come in two sizes, for either two to three people or three to five people. They include the Tokyo Board: dim sum, yakitori, sushi, sashimi, tempura and other Asian-inspired ingredients; the Northwoods Board: bread, cheese, meat, dips, spreads and other Wisconsin ingredients; and the Tapas Board: olives, meat, cheese, skewers and other Spanish-inspired items.

Larger plates and entrées hail from land, sea and earth, highlighting meat, seafood and vegetarian selections. Although there aren’t any designated gluten- or dairy-free options, Boss noted that many of the dishes are very adaptable to suit a specific dietary need.

Diners can expect the menu to be updated several times each year as the seasonality of ingredients changes. The goal is to keep the menu focused on the things the kitchen does really well and at a level where attention to detail is high.

As dishes started to leave the kitchen on opening night, it was clear that plate presentation was important: Each dish was delivered on beautifully styled servingware and with thoughtfully presented ingredients. The saying, “You eat with your eyes first” rings very true at Clover & Ash.

The restaurant plans to operate Thursday through Sunday until May, when hours will shift to five days a week (closed on Tuesday and Wednesday). For the inaugural weekends of service, the menu is limited to dinner, 4-9 pm, but the restaurant will soon expand to offer its lunch menu on Saturday and Sunday, 11 am – 2 pm.

“Working with the Town of Baileys Harbor during this process has been great,” Unkefer said. “I’m proud to be restoring some of the history here and bringing back this building. It’s been awesome to learn the story of this location and incorporate some of those roots.”

Between the reimagined space and the standout cuisine, Clover & Ash offers an exceptional experience that has broadened the appeal of dining in Baileys Harbor.

Clover & Ash, 8054 Hwy 57 in Baileys Harbor, is across from the Baileys Harbor Visitor Center. Visit cloverandashrestaurant.com to learn more and find its Facebook and Instagram accounts.