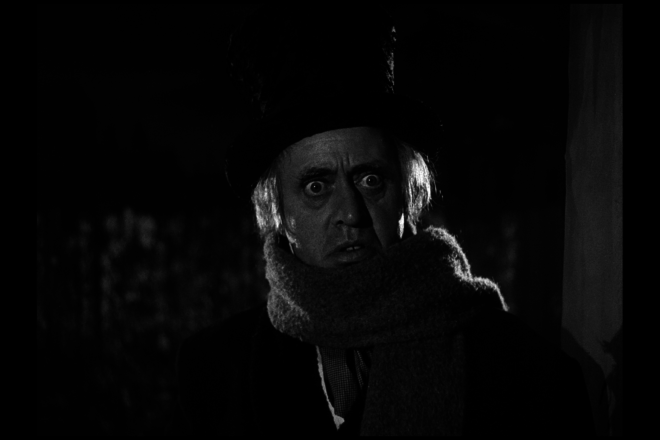 Scottish actor Alastair Sims is widely regarded as the greatest of screen Scrooges for his portrayal of the famous fictional skinflint in the 1951 film version of Charles Dickens’ A Christmas Carol.

We were driving to our daughter’s house for Thanksgiving when a historic 1959 interview by Mike Wallace was featured on the radio. His guest was Ayn Rand. As I listened, it grabbed my attention. Christmas was right around the corner and her comments put me in mind of Charles Dickens’ cranky character in A Christmas Carol.

Ebenezer Scrooge was the archetypal anti-social capitalist. Christmas formed the backdrop for his transition from miserly misery to a moral and ethical awakening. Thanks to the apparition of his deceased partner, Jacob Marley, he transformed his previous devotion to self enrichment into a commitment to the public good. Dickens arguably did more to capture and crystallize the altruistic ideals of this, our most eclectic holiday, than anyone before or since.

Some of Rand’s statements sounded so much like Scrooge, her first name could have been Ebenezer. A couple quotes provide examples: “If any civilization is to survive, it is the morality of altruism that men have to reject.” Universal health care, or welfare, or even EPA would clearly not fit into her “civilization.”

Her measure of merit is definitely dollar dependent: “Money is the barometer of a society’s virtue.” But “societal” virtue should have something to do with benefiting society long term, as in environmental quality and sustainability.

She devalued self sacrifice. “I swear, by my life and my love of it, that I will never live for the sake of another man, nor ask another man to live for mine.” Doesn’t sound like she would applaud volunteer firemen, or military service, or organ donors. “Civilization is the process of setting man free from men.” But Webster’s Dictionary has a different take: civilization is “the condition that exists when people have developed effective ways of organizing a society and care about art, science, etc.”

She adamantly stated that any regulation by government diminishes freedom. But regulations are quite valuable. I used to volunteer as a cook at various special events. I had to follow food preparation directives to the letter. Health Department officials often showed up and inspected the entire operation, even recording the temperatures of food I’d prepared. If food handlers had license to do whatever would reduce their costs, imagine the very real harm this could inflict on people. Regulations pertaining to everything from food to traffic safety to toxic chemical or radioactive exposure, protect everyone’s freedom. Like many people, she confuses the word “freedom” with the word “license.” Freedom is enhanced by responsibility, license implies acting irresponsibly.

Because economic gain is attained at the expense of our environment, we all benefit by keeping that expense minimal, reasonable and restorable (i.e. regulated). Enthusiasm for so called “deregulation” is a red flag. It may benefit a few, but it impacts everyone, since ignorance of ecological realities gives rise to a lack of precaution, which leads to increased pollution.

What if Ayn Rand had been visited by the “Ghost of our Hominid Past.” Imagine if she could be shown tribalism and social cohesion, whereby our ancestors helped one another through any number of difficulties and in this way survived tribulations from drought to famine to the Ice Age.

Then the “Ghost of Humans Present” would point out the awful consequences when cleverness replaces our ancient wisdom. Unbridled greed and corruption lead to poverty, world war, countless species extinctions, soil loss and rampant pollution.

The scariest apparition would be the “Ghost of Humanity’s Future.” Rand could be shown a barren wasteland, sullied waters, runaway global warming, depletion of life, and the notable absence of us humans, having joined a long list of extinctions. Are these the shadows of what will be, or of what might be? At this point, perhaps like Scrooge, she would finally abandon what she called “the virtue of selfishness.”

This Christmas, we will again watch a couple favorite Scrooges. Michael Caine’s performance in The Muppet Christmas Carol, of all places, artfully captures Scrooge’s tragic past and triumphant reformation. Alastair Sim, from the ’50s is a classic, and of course, there’s our favorite, George C. Scott, who brings Scrooge to life, as a truly scary miser who becomes a contrite and generous pillar of his community. As Christmas approaches, in this the darkest time of the year, it’s the perfect time to look forward to the coming spring.

Might we all be motivated to re-examine our values. Get involved, in whatever ways you find comfortable and meaningful. Hold politicians accountable and find where their loyalties really lie – with the greater donor or with the greater good.

And may God bless us, every one.