I have come to the conclusion that the snotty children who manage political campaigns from state headquarters in Madison or national headquarters in Washington think we are a bunch of unsophisticated rubes, and they really believe they can manipulate votes through negative campaigning.

This became patently clear to me in the 2016 8th Congressional District race when we were bombarded by ads from the Republican National Committee that hammered at the Democratic candidate with ridiculously misleading statements and downright lies. None of the advertising touted the accomplishments or vision of the Republican candidate, Mike Gallagher, who, despite the awful campaign conducted by his party, went on to win the race.

When I contacted the Republican National Committee for a comment about their negative ad campaign in the summer of 2016, the response I got from one of their people was this:  “Journalism is dead.” 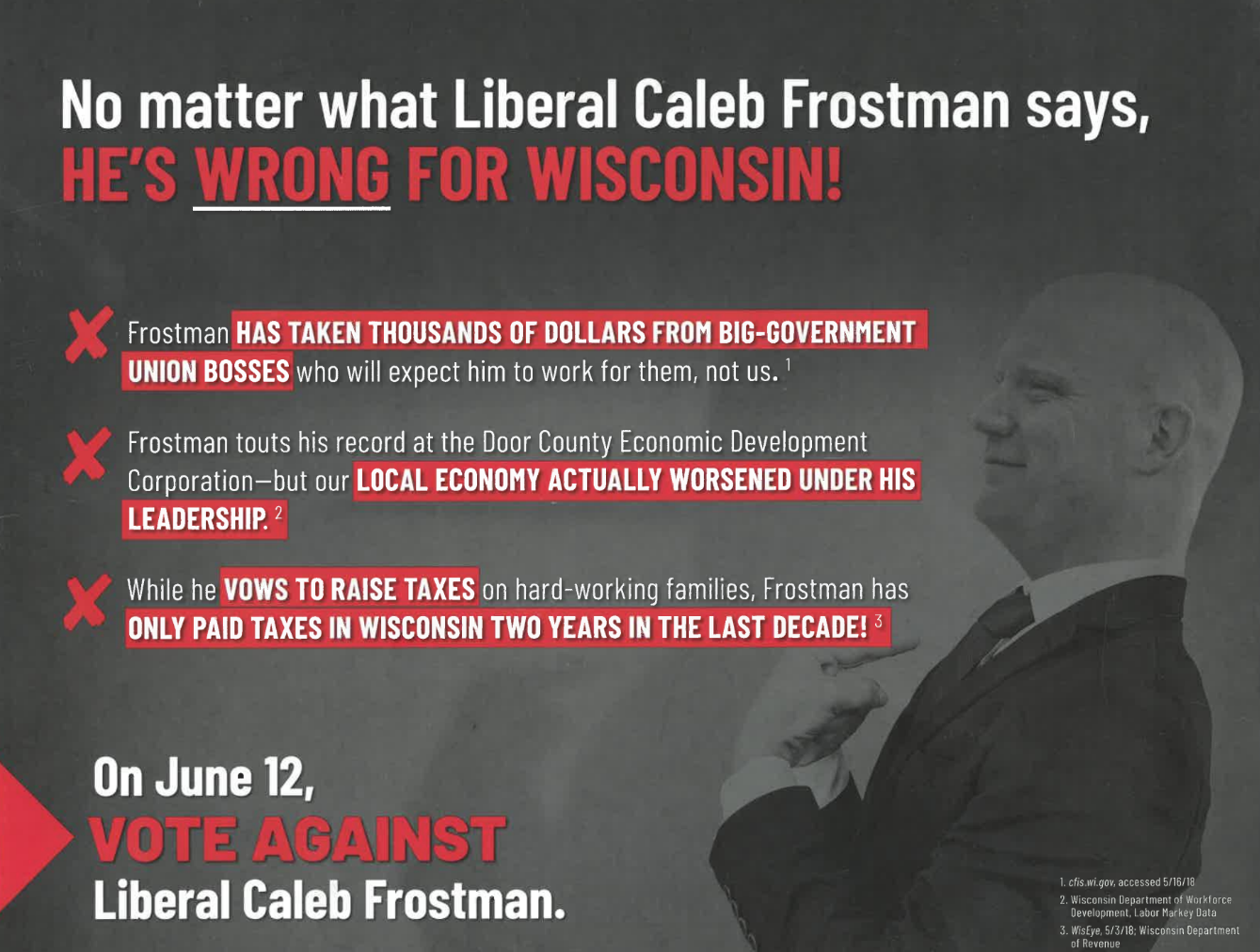 Which is what leads me to believe that unruly children are in charge of the campaigns, and, to make matters worse, they believe they are smarter than the constituents they are trying to manipulate. And it seems that style of campaigning has filtered down to the state level.

Take, for example, the flyers people in the 1st Senate District have been receiving from the Republican Party of Wisconsin as an “in-kind” contribution to the campaign of André Jacque.

The flyers do not tout the achievements of the Republican candidate. In fact, the only reference to the him is in the previously mentioned reference to the in-kind payment to Jacque for Senate.

Better yet, Jacque wasn’t even aware of the flyers. When contacted about them, he asked to see a copy.

The first flyer sent out featured Caleb Frostman’s head photoshopped onto a smaller man’s body. His shadow is a long-nosed Pinocchio figure.

For example? They give no examples because, apparently, it is enough to say such a thing.

Flip the flyer over and we learn that Frostman “only paid taxes in Wisconsin two years in the last decade!”

Yes, because the Wisconsin native was living and working in Minnesota, where he paid taxes.

The flyer then goes on to shoot the entire Republican agenda, which has unfolded in this state since 2010, in the foot by saying, “Frostman touts his record at the Door County Economic Development Corporation – but our local economy actually worsened under his leadership.”

If you think about that statement, and if, in fact, the “local economy actually worsened” (they provide no facts to back this up), wouldn’t Frostman’s opponent, a four-time Republican Assemblyman in a Republican-controlled legislature be more to blame than the former director of the Door County Economic Development Corporation?

The second flyer has Frostman in his real body, but now he wears a crown and is identified as “King Caleb.” Folks are asked to “vote against King Caleb Frostman” on June 12 because he will take away “individual decision-making.”

In both flyers are copyediting errors that give a clue about how much adult effort was expended on the sophomoric exercise.

When you take into account that the Republican candidate’s colleagues in the Legislature endorsed the losing primary candidate, it becomes more evident why the state party decided to take the anti-Frostman tack rather than ringing endorsements for its candidate.

Well, it could be worse. Negative campaigning is not a modern phenomenon. Take, for example, the presidential election of 1828 when Gen. Andrew Jackson, hero of the War of 1812, was running against President John Quincy Adams. An Adams supporter in Philadelphia, who also happened to be a printer, released a series of anti-Jackson handbills, including one that claimed Jackson was a cannibal, who, after massacring 500 Indians,“the blood thirsty Jackson began again to show his cannibal propensities, by ordering his Bowman to dress a dozen of these Indian bodies for his breakfast, which he devoured without leaving even a fragment.”

Jackson went on to collect 178 of the 261 electoral votes and a little less than 56 percent of the popular vote, and Adams became the second one-term president, after his own father, John Adams.