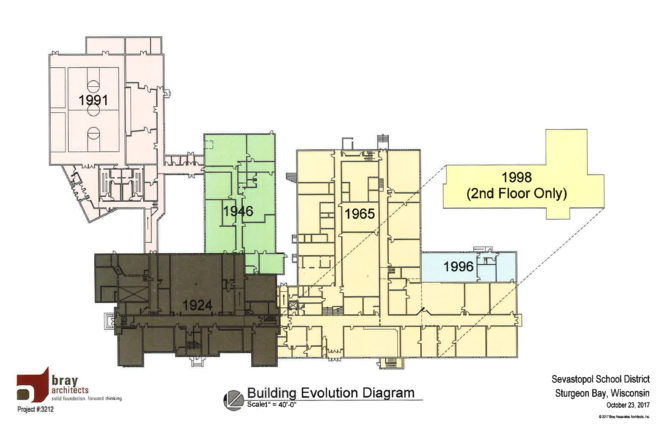 As the diagram accompanying this story illustrates, Sevastopol School is a consolidation of buildings dating back to 1924. The next addition came in 1946, followed by another in 1965, then nothing until the 1990s, when three separate additions were necessary.

“We’re busting at the seams right now,” said a member of the newly created Citizens Facility Advisory Committee at the group’s fourth meeting on Dec. 11.

At that meeting, two members of Bray Architects – Craig Stranathan and Ryan Sands – presented a number of options for either renovating existing buildings, reconstructing some buildings or starting all over with a new building.

Sevastopol School District Superintendent Kyle Luedtke, who came to the district this year from the Benton District in southeastern Wisconsin, said one of the things he found on his desk when he took office was a set of Bray architectural plans from the last time the district was considering bringing up a referendum for a new school. The district sent out surveys on the proposal in November 2015, and the reaction was not favorable.

At Luedtke’s first board meeting in August, he mentioned those plans and thought it should be added to the agenda for the next school board meeting, but the board said they wanted to start fresh, so a special meeting was called for Sept. 7, and that is when the Citizens Facility Advisory Committee (CFAC) was formed. 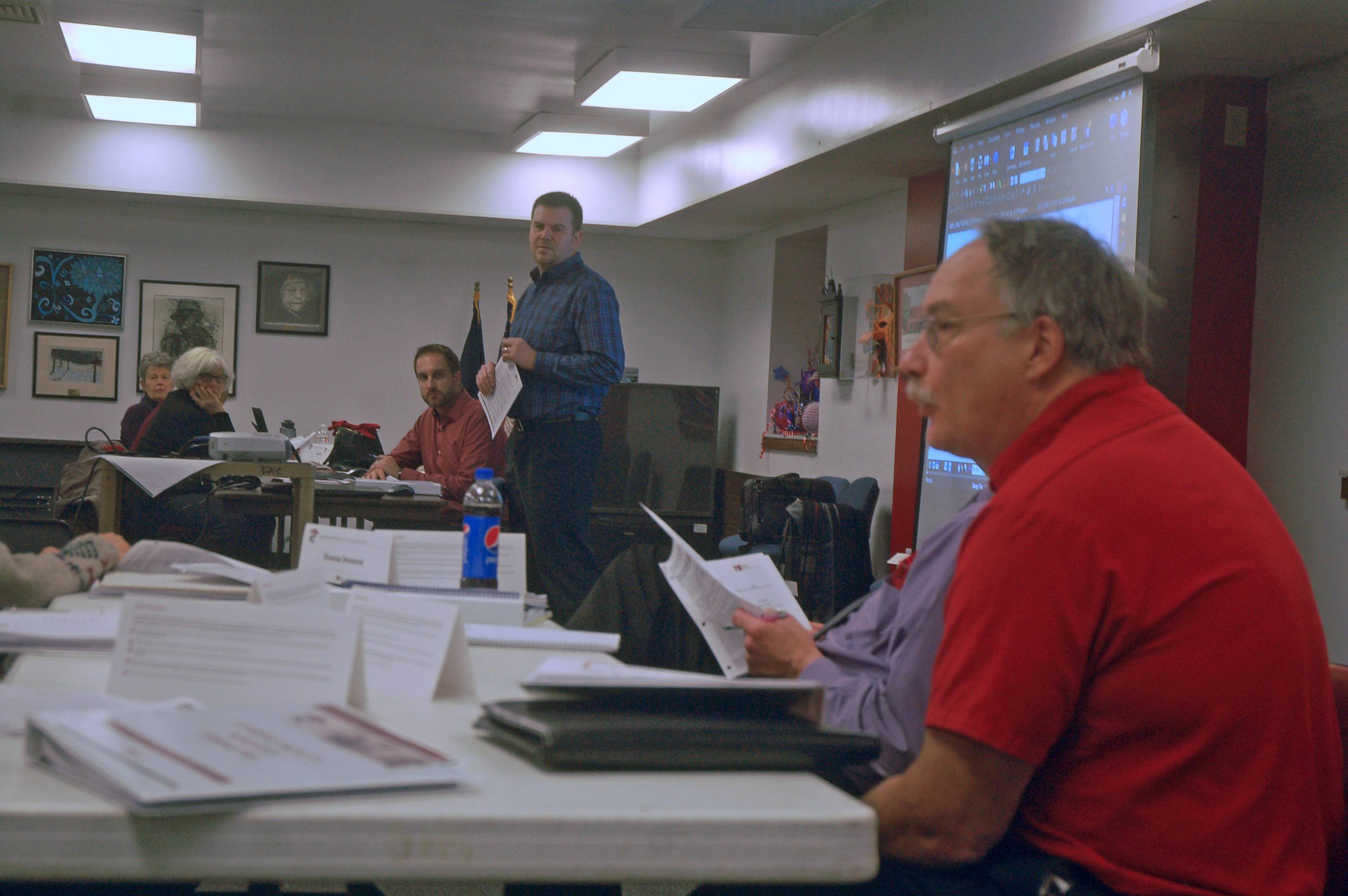 At the Dec. 11 meeting, 29 people took part in the committee, which first heard options from the Bray representatives and then broke into small groups for discussion before returning to the large group. There were also several members of the public observing from the sidelines.

“Bray divides us into small groups for discussion, and every time we mix up who you’re sitting with to get different minds thinking together,” Luedtke said.

While Luedtke said it is far too early in the process to see a clear path to one of the options, he said, “It’s obvious something needs to be done. The next couple of meetings will give us even more focus on our direction.”

Here are the options that were presented, with very ballpark figures:

Option 2:  Demolish the 1924 structure and replace with a two-story addition for grade school, infrastructure upgrades to the middle and high school as well as additions and renovations to the tech ed, commons, cafeteria and kitchen. Cost range:  $35 to $37 million.

Option 3:  Build a new two-story all-grades building on district property. Cost range:  $47.5 to $50 million. Stranathan of Bray referred to this as the “pie-in-the-sky” option. However, several committee members seemed to voice support for building a new, 21st century school.

Option 4:  Infrastructure upgrades and renovations for the middle and high schools and a new two-story elementary addition. Cost range:  $31.5 to $33 million.

One thing Luedtke wants to do to propel the process, and he will ask the school board to do so, is spend $3,300 to have the Applied Population Laboratory at the University of Wisconsin-Madison do a future population study.

“We want to know what the student population is going to be in the future,” he said. “We’re not only building for kids today but for student populations of the future. When they built the original building back in 1924, their enrollment was 349. You’ve got to plan for the future. That’s why the additions were added, to account for the growing population. Now some of our additions are getting up there in age and we have to decide what we need for a facility. To have UW do a study of what our projected enrollment is should give us a ballpark of what we should plan for.”

Luedtke said CFAC has about 10 more meetings scheduled, but he would not be surprised if even more are needed to meet all the concerns of the school district’s constituents. Eventually, a survey will go out to district residents.

“We’ll listen to what the community tells us in the surveys,” he said. “This committee is going to do its due diligence. We’ve got a lot of good people on there.”

Luedtke feels that last time the district sent out surveys in advance of a possible construction referendum, the needs at the school were not effectively communicated to the voters. He wants to avoid that this time, which is why CFAC is formed and why he puts out an invitation to tour the school.

“We will give a tour to anyone who wants one,” Luedtke said. “Get in touch with Roch Lautenbach (director of buildings and grounds) or myself. We’ll be having set tour dates as well. We want our public to come in. If it has to be during the evening, give us a call and we’ll work that out. But it would be great if it’s during the day because we’d like to have the citizens see how the building operates with students in it. It’s one thing to walk through when the kids are not here and a totally different thing to see it when the students are here.”