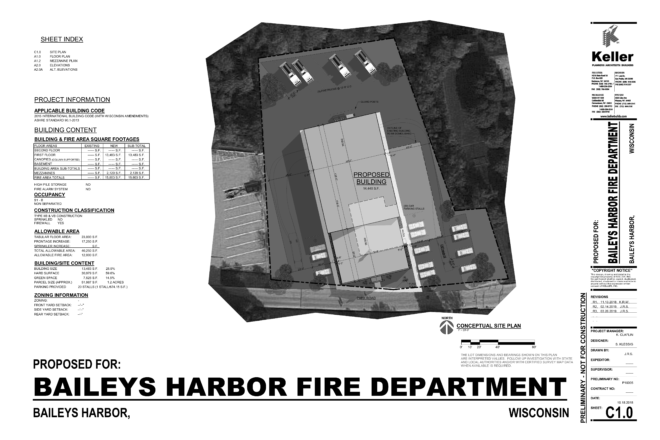 The committee tasked with coming up with a solution to Baileys Harbor’s aging, outdated fire station advised the town board to build a new station at its current Park Road location rather than on town property on Summit Road.

Three members of the Baileys Harbor Fire Building Committee – Tim Tischler, Fire Chief Brian Zak and Assistant Chief Eric Peil (a fourth member of the committee, Barbara Anschutz, was also present, sitting on the town board) – appeared before the town board at its July 8 meeting to provide details about why the committee voted unanimously for the Park Road location.

The committee members pointed out that even the most adamant supporter of the Summit Road location, Bill Becker, was convinced by all the evidence accumulated against making the move.

The committee formed in February to look at options for replacing the fire station. It met with Keller Builders for a needs assessment and visited other fire stations in the county, including the new Brussels, Union, Gardner (BUG) station in southern Door, which, Tischler said, is a great model for Baileys Harbor, minus the ambulance headquarters that BUG has.

Zak said the town’s insurance rating could be affected by a move to Summit Road because of a longer response time to homes. He said there are also major concerns about the ability to safely get on to Highway 57 from the Summit Road slope that it meets. In the winter, there could be ice that creates danger and delays for emergency vehicles trying to hurry to a scene.

The committee also had Wisconsin Department of Transportation experts do a site visit. They determined there was not enough visibility from the south, and they, too, had concerns about the safety of the incline on Summit Road.

Town Supervisor Bobby Schultz, a supporter of the Summit Road location, said, “Ephraim goes down a steep hill,” and quickly added,  “I’m not going to fight about it.”

Tischler said Keller’s preliminary budget came in between $2.8 million and $2.95 million, and the Summit Road location would cost anywhere from a quarter-million to a half-million dollars more.

“We’re already asking the town to bite off a pretty good chunk of money to build this fire station,” he said.

One of those costs would be obtaining sewer and water services. Tischler pointed out that the current location is already served by the town sewer system, high-capacity well and cistern.

“Moving to Summit Road, all those things would need to be added,” he said.

“We have a pipe under the berm for that reason if anything was ever added there,” Schultz said. “That was all figured in.”

The town has talked about developing affordable housing on some of its Summit Road property, and Schultz said the committee should be thinking of future town growth in planning the station.

Tischler pointed out that the current station, built in 1956, has outlived its usefulness, and a decision has to be made.

Tischler unveiled a tight timeline, saying Keller needs to have approval to move forward by October in order to put out bids in January and break ground in March 2020.

“I think we as a committee have covered all the bases here,” he said.

Town Chair Doug Smith said the board should take a month to digest the committee’s report, then decide at the July meeting how to proceed. He suggested that the town does not have to call a referendum or special meeting, but it may simply hold an open house to present the proposal to taxpayers. He believed that because the town is not buying property, it has no statutory responsibilities for anything more than that, but he added that he would verify it.