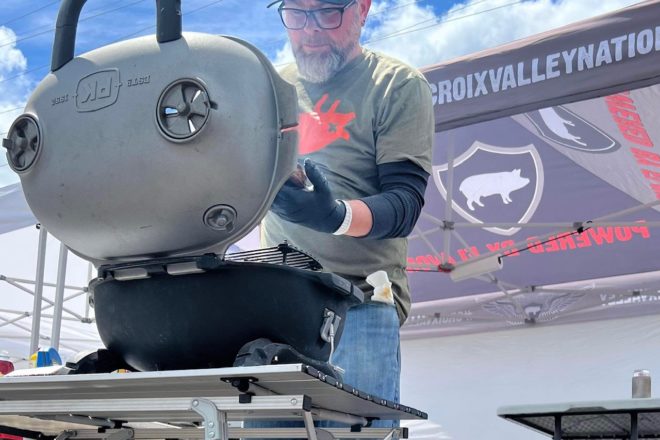 Scott Nardi, reigning Steak Cookoff Association world champion, will take on the competition at the Death’s Door Bar-B-Q for the first time Aug. 27 and 28.

When Scott Nardi steps to the grill during the Aug. 27-28 Death’s Door Bar-B-Q competition, it will be his first time on Washington Island, but it’s certainly not his first cookoff. The reigning Steak Cookoff Association (SCA) world champion from Shiocton, Wisconsin, said the two-day competition is “legendary among Wisconsin cooks.”
“All I’ve heard for the last four years is, ‘You’ve gotta go to the island,’” Nardi said.

And so he is. He’ll be competing in the Kansas City Barbecue Society One Meat Rib Contest as part of a team called the Cheesecurd Cartel, as well as in the SCA Steak Contest – featuring two steak events – as an individual. There are also two ancillary events: a dessert contest and a Death’s Door Gin cocktail contest.

During the two steak events, each contestant will receive two steaks for Steak A and two for Steak B. They can be cooked on any heat source – charcoal, gas, LP or electric – but only one steak will be turned in to the judges for each round.

Certified SCA judges will follow SCA guidelines to evaluate and rate the results on the five required criteria of appearance, doneness, texture, taste and overall impression. All steaks must be cooked to medium doneness to receive a full 10 points.

But we’re getting ahead of the game – or grill, as it may be. The competition really starts during steak selection: a USDA Choice–grade ribeye cut 1-1/8 to 1-1/4 inches thick, provided by the event organizer or sponsor to keep things fair.

Nardi said competitors always hope to get the steak they want, but luck of the draw plays a role in who chooses first. After that, he and other competitors attempt to manage the elements of the contest that they can control to the best of their ability.

For Nardi, that means striving for consistency, in both practice and competition, regardless of whether he gets his first-choice cut of meat.

“How do you play sports? It’s ‘practice how you play,’” he said. “It’s shifting that mindset of thinking food is dinner. Not so much.”

He explained how he and his wife, who also cooks competitively, do a trial run of whatever skill they’re trying to hone. They both cook a steak, then take turns testing it, looking for all the criteria the judges look for.
“We’ll take a bite, and then it goes into the fridge,” Nardi said. “The next day, we turn it into fajitas or something for dinner. You learn to differentiate dinner time from practice time.”

Despite winning the SCA World Championship title earlier this year, Nardi isn’t going into the weekend’s competition with any expectations other than cooking better than the last time he competed. In fact, that’s been his go-to game plan since he started cooking competitively four years ago.

“I was always interested in barbecue competitions,” he said. “They seemed fun, but also somewhat unattainable. But cooking a steak – now that seemed within reach. I can do that!”
During the past year, Nardi has cooked in nine states, and recently, he’s been trying his hand at the once seemingly unattainable world of barbecue competition.

“Really, it’s the challenge of doing something new,” he said. “Steak – and food sport in general – was a challenge. I jumped into it and did well, so now it’s like, what else can I do?”

Death’s Door Bar-B-Q is a Kansas City Barbecue Society–sanctioned competition, complete with certified judges and $8,000 in prize money, and the Washington Island Chamber of Commerce is its presenter. The contest takes place at the Washington Island Airport, opens to the public Aug. 27 at 10 am, and offers free admission, arts and crafts, kids’ activities, live music, food vendors and of course, barbecued chicken, pork, pork ribs and beef brisket sold by some of the competitors. Find out more at deathsdoorbbq.com.