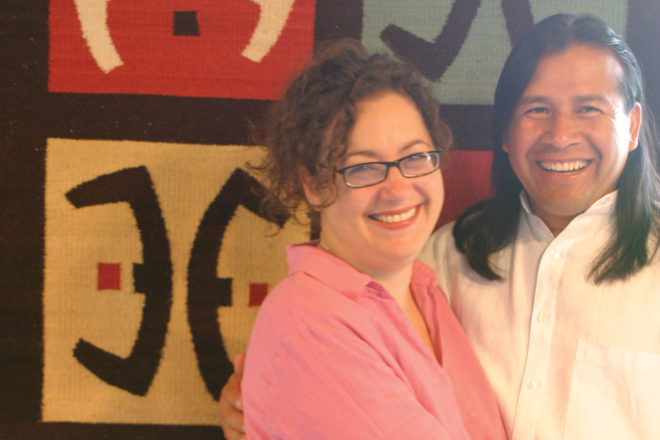 The universe pulls us from all directions. From our past, from our future, and from the moment. For Wence Martinez, a full-blooded Zapotec Indian, the pull began two thousand years ago when villagers from Teotitlan began to weave, and continues today at his gallery near Jacksonport, where he and his artist wife, Sandra, run Martinez Studio. Their story begins long ago.

The Zapotec people were one of the first groups to settle in Central America. In the southeastern state of Oaxaca, Mexico, in the ancient village of Teotitlan del Valle, historical documentation cites villagers creating “400 measures of patterned cloth and 800 measures of large weavings” back to the 15th-century.

Wence began to weave when he was nine years old, learning from his father and grandfather. When he was thirteen, a painter, Edmundo Aquino, began a search for a small group of weavers to incorporate painters’ designs into tapestry. Aquino found Wence and awarded him a scholarship to do advanced studies in dyeing and weaving techniques at the Taller Nacional de Tapiz in Mexico City.

“The other weavers in the group eventually dropped out, threatening the program,” says Wence. “But I didn’t want to leave.”

The school allowed him to continue his education with only a partial scholarship. That’s when he bought his shoe shine box. For two years of Sundays, Wence was the young boy on the corner shining shoes across Mexico City. He still owns the box containing the brush and polish of his past.

“Whenever we go to Oaxaca, we still get shoe shines to support the youth,” says Sandra. “We talk to the kids and ask them ‘Do you have a dream?’ and encourage them that it can happen. We’re living proof.”

The experience in Mexico City strengthened his convictions about the importance of quality and authenticity in his work. “I’ll never forget Aquino,” says Wence. “Even when I wasn’t selling anything, he always encouraged me to keep producing my own designs and to be proud of my Indian heritage. That’s how you make your dreams come true. Just keep at it.”

Wence feels fortunate to own his own gallery and grateful to the collectors who have supported his work. To this day, most weavers in Oaxaca sell their exquisite work to dealers who market it in foreign countries under a wholesale name. They work anonymously with no real appreciation for their art.

Today a master weaver, Wence continues the traditions of his people by using hand spun/hand dyed wool, weaving his original contemporary and traditional designs into museum quality tapestries for the floor or wall. His work reflects the influence of his Zapotec tribe’s traditional designs, combined with North American Indian, Persian, and Turkish elements. The looms he uses are handmade in his village.

His work is highly respected. “Codice Nuttal”, a technically virtuoso piece, is on exhibit for the summer at the Mexican Fine Arts Center Museum where Wence has been invited to demonstrate his art. Honored to be doing cultural educational events, he will also be making a traditional altar dedicated to his grandfather and speaking at the Museum for the Day of the Dead, November 1st.

As Wence’s past pulled him to weave, his future came knocking at the door. In 1987, Sandra asked

her friend, Kathy Navis, who was traveling to Mexico, to look for someone to translate her designs into tapestry. The weaving that returned to Sandra was so technically phenomenal, that she, herself, felt a pull to meet this person. She knocked on his door thousands of miles away and they fell in love. Wence and Sandra are now partners in life and art.

Sandra’s current body of work began in the early ‘80s, when she started working with primitive and symbolic imagery. She now fashions functional art for the home and wearable art for women adorned with her signature glyphs.

Her original meditative symbols are woven into Wence’s tapestries and appear on handmade, one-of-a-kind scarves, shawls, handbags, pillows, bamboo vessels and even bright vinyl. Her symbols begin as drawings done during the quiet of Door County winters and on trips to Oaxaca.

“In the beginning of time, drawings were language. I use my symbols like they are my vocabulary. Sometimes I give them a name, a starting point for the viewer but I like their elusive quality and don’t want to tie them down too much.”

“When I started, my stylistic drawings had a foreground, a background, and a narrative. Now, they’ve become distilled down to symbols inspired by my interest in Asian work. When I look at my earlier work, I see premonitions there that the drawings would be reduced to their most essential elements.”

Following the advanced evolution of Asian spirituality, Sandra’s symbols reach out. “I spent a lot of time studying religious concepts. I don’t think those things leave you. Now, I wonder how those religious systems intersect in the universe. It strongly influences my work.”

One can see similarities between Sandra’s symbols and ancient Taoist graphic art, which dates back to the early 12th century. It was considered ‘practical magic’ – enabling man to communicate with the spirit world and influence the workings of the invisible forces of nature for his own benefit. Today, the spiritual element of Sandra’s work empowers women in the moment. For those non-believers, one only needs to observe the look on a woman’s face as she drapes one of Sandra’s shawls over her shoulders. It can be transformative.

“The fabric pieces are meant to give the wearer a tangible feeling of comfort…to be wrapped up in such luxurious fabrics, but also to be nurtured, fed or protected if you will, by the symbols on them,” says Sandra. “The shawls help you move with strength in a public setting, like a queen. The effects are subtle, but powerful.”

Trained in three-dimensional art with a focus on ceramics, Sandra was influenced by David Damkoehler at the University of Wisconsin – Green Bay. “I spent my life in those studios. David taught me that the media you choose has nothing to do with the quality or validity of the work. He instilled in me a deep respect for all artistic processes and to strive for intuitive truth in my own work.”

Today, a large part of Sandra’s art has become assemblage. “In the summer, it’s a free-for-all. I consider the symbols my friends. They speak to me on so many levels. I play with them in the same we play with the letters of the alphabet. We never get tired of the letter, ‘A’, and I never tire of my symbols.”

The artists work long hours in the gallery with no complaints. “I get to spend my days composing. I wouldn’t dream it any better than this,” says Sandra. “It’s fun!” they exclaim, simultaneously.

Today, the two artists produce new work, manage their gallery, raise a family, and continue construction of an artists’ retreat/Bed & Breakfast in Teotitlan del Valle with a plan to spend winters there. In the future, Wence hopes to meet a young artist from his village and help him develop his own work as Aquino encouraged him. Sandra already mentors young artists from the area in her studio.

Sandra and Wence are evidence that the universe speaks to us in different ways and at different times, influencing our journey. To these two kindred spirits, it speaks of dreams, the determination to succeed, and the celebration in reaching their destination after so many years.