Terry Goettleman, owner of Fred and Company in downtown Fish Creek, was awoken early in the morning of May 9 by a phone call. 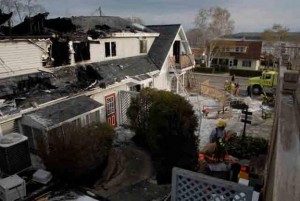 Firefighters clean up the aftermath of a Friday morning fire at The Cookery restaurant in Fish Creek.

“Terry, The Cookery is on fire, you may want to go down there,” her friend told her.

Goettleman’s store is just two doors down from the venerable Fish Creek restaurant. Fortunately, her store and none of the adjacent buildings were harmed. The Cookery, however, was devastated.

Around 3 am Friday a boater heard a loud pop and called the fire department. Firefighters were able to contain the blaze and limit total destruction to the second floor of the Cookery, where an apartment is located, but the first floor restaurant was severely damaged by smoke and water. As a result the restaurant will not re-open until 2009.

Dick Skare, who has owned the restaurant with his wife Carol for 30 years, said the cause had not been determined as of Monday afternoon.

“The state fire marshal was here all day Friday and the insurance company is conducting their interviews, but nobody has told us anything yet,” he said.

The restaurant employs about two dozen people, and Skare said his family’s immediate concern is with them.

“That’s the hardest part,” he said. “We’ve built relationships with them over a lot of years, and knowing the impact on the staff is tough.”

He said The Cookery’s business interruption insurance will cover them for 60 days and the timing of the fire should help them latch on with a job as businesses build up staff for the season.

Though the fire caused the most severe damage to the building’s second-floor apartment, Skare said it is likely the whole building will have to come down and be rebuilt from scratch.

“Looking at it and talking to contractors it appears that is the prudent thing to do, but there’s nothing definitive yet,” he said.

The kitchen equipment may be salvageable, and chairs and tables were taken from the largely unscathed dining room. In addition, Skare’s daughter Courtney, who returned home last year to jump into the business, said an integral part of the restaurant’s operations was salvaged the morning of the fire.

“We were able to save our recipes,” Courtney said with relief, “one of the most important parts.”

Courtney said they’d long considered creating a cookbook, “and we might have the time this summer now.” And they’ll have time for a couple other fairly significant family events as well. Dick is campaigning as a Democrat to unseat Garey Bies (R-Sister Bay) as the representative for the 1st Assembly District in the State Assembly, while Courtney is set to get married in August.

“Planning the wedding got a lot easier I guess,” said the bride-to-be Friday. But there was resignation in every word.

“We were really excited for the summer,” Courtney lamented. “We just got Travel Green certified and got all this good publicity. Now we’ll get the wrong kind."

As he watched firefighters recoiling hoses and retreating from the cooling blaze with his daughter Friday, Dick joked that it must have been the new “green” materials and procedures that caused the fire. His daughter Courtney, the instigator of the family’s effort to incorporate sustainable practices, readied her father for another wave of education.

“You know we’re going to have to build it back even greener,” she said, quite serious.

Dick Skare said the fire will not slow his campaign for state representative, and instead looked forward to the challenge ahead for his candidacy and his family’s restaurant.

“It’s a kick in the pants,” he said. “But the outpouring of goodwill from the community shows you what it’s all about. It is what it is, and all you can do is work through it.”