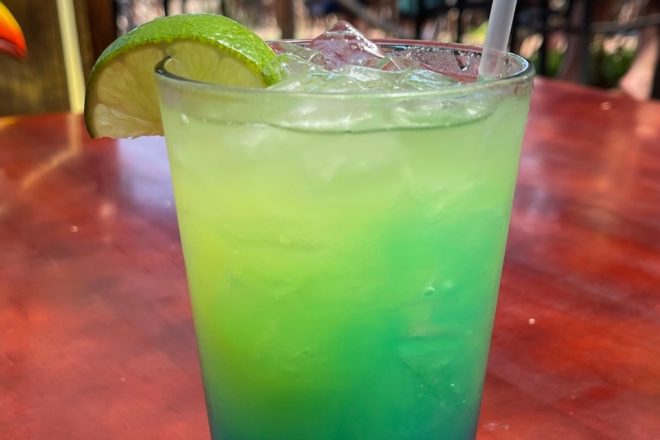 In the dog days of summer when the humidity climbs, try one of these local summer favorites to cool down!

Last year, Husby’s in Sister Bay added frozen drinks at The Filling Station to its sprawling outdoor scene, but on a hot summer day, locals still call for the Big Time to cool down.

As a summery riff on the classic Clover Club cocktail, Waterfront in Sister Bay serves the Crimson & Clover: a blend of syrup made in house from tart cherries, gin, dry vermouth, fresh lemon juice and an egg white for a creamy, dreamy texture.

The expansive cocktail menu at Wickman House in Ellison Bay offers several summer coolers, from classics such as the Hemingway daiquiri to the fruitful caipirinha. But those in the know turn to the spicy Little Devil, a mix of jalapeño-infused tequila, lime and honey water that puts some bite into an otherwise sweet summer cocktail scene.

When Al Johnson’s opened Stabbur Beer Garden in Sister Bay five years ago, then-bartender Michael Termini made this twist on a classic the bar’s signature drink. The blend of vodka, blueberry syrup and ginger beer became an immediate favorite.

Kitty O’Reilly’s in Sturgeon Bay has one of the peninsula’s best beer gardens, and on a sun-drenched day, nothing goes down easier than the bar’s Mermaid Water: a blend of Captain Morgan’s and Malibu rum, pineapple juice and blue caraçao.

You have to know it’s there to find it, but tucked between JJ’s La Puerta and the Waterfront in Sister Bay is the Sugar Shack. The feel of summer is complete when you’re sipping on its Painkiller: a sweet mix of (plenty of) rum, orange juice, pineapple juice, cream of coconut, and freshly grated nutmeg.