Applause erupted at the Sept. 27 meeting of the Door County Board after 17 of the 21 supervisors voted to retain jail employees as protective status like their patrol colleagues in the Door County Sheriff’s Department.

The change would also remove jailers from eligibility for duty disability, a state program that pays higher income reimbursement for an injured worker than workers compensation rates. 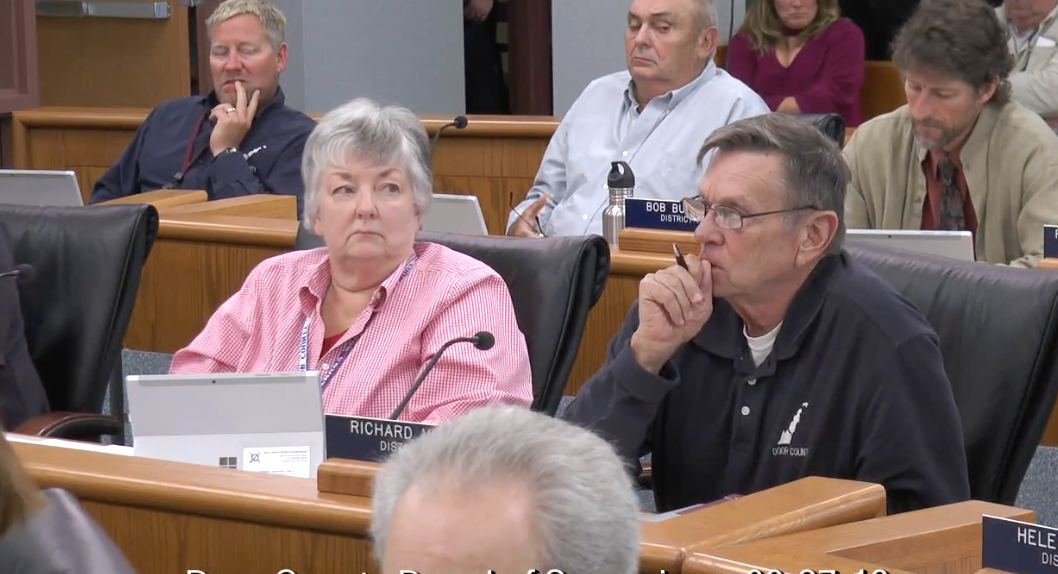 The nearly four hour meeting began with public comments from members of the department, including Sheriff Steve Delarwelle, as well as Sturgeon Bay Police Chief Arleigh Porter and a member of the public speaking in support of allowing jailers to remain protective status and part of the bargaining unit.

Delarwelle said many counties changed the status of jailers in the wake of Act 10 “in a shortsighted attempt to save money and eliminate bargaining units,” but the reality, he said, is that those departments have more expenses related to being in a continuous mode of hiring and training because of turnover. He warned that if the measure is passed, “You will not be able to rely on the charm of Door County to attract people.”

Several officers spoke about coming to work in Door County from other law enforcement agencies because the protective status offered stability.

Chief Deputy Pat McCarty said when he began his career with the department in the 1990s, the Door County department was seen as a stepping stone into Brown County or Fox Valley departments, but that has since changed with recruits coming here with careers in the department in mind.

Lt. Tammy Sternard, who has overseen the jail since 2007, reminded the board that the jail generates about $300,000 annually in revenue by renting space to other jails, mentioning that the jail population on that particular day was 107, with 34 of inmates coming from other counties.

Chief Porter said the most valuable asset the county has are the men and women of law enforcement and urged the board to maintain them under protective status.

Even former Sheriff Terry Vogel spoke, saying the issue was important enough to rouse him out of 3½ years of retirement. 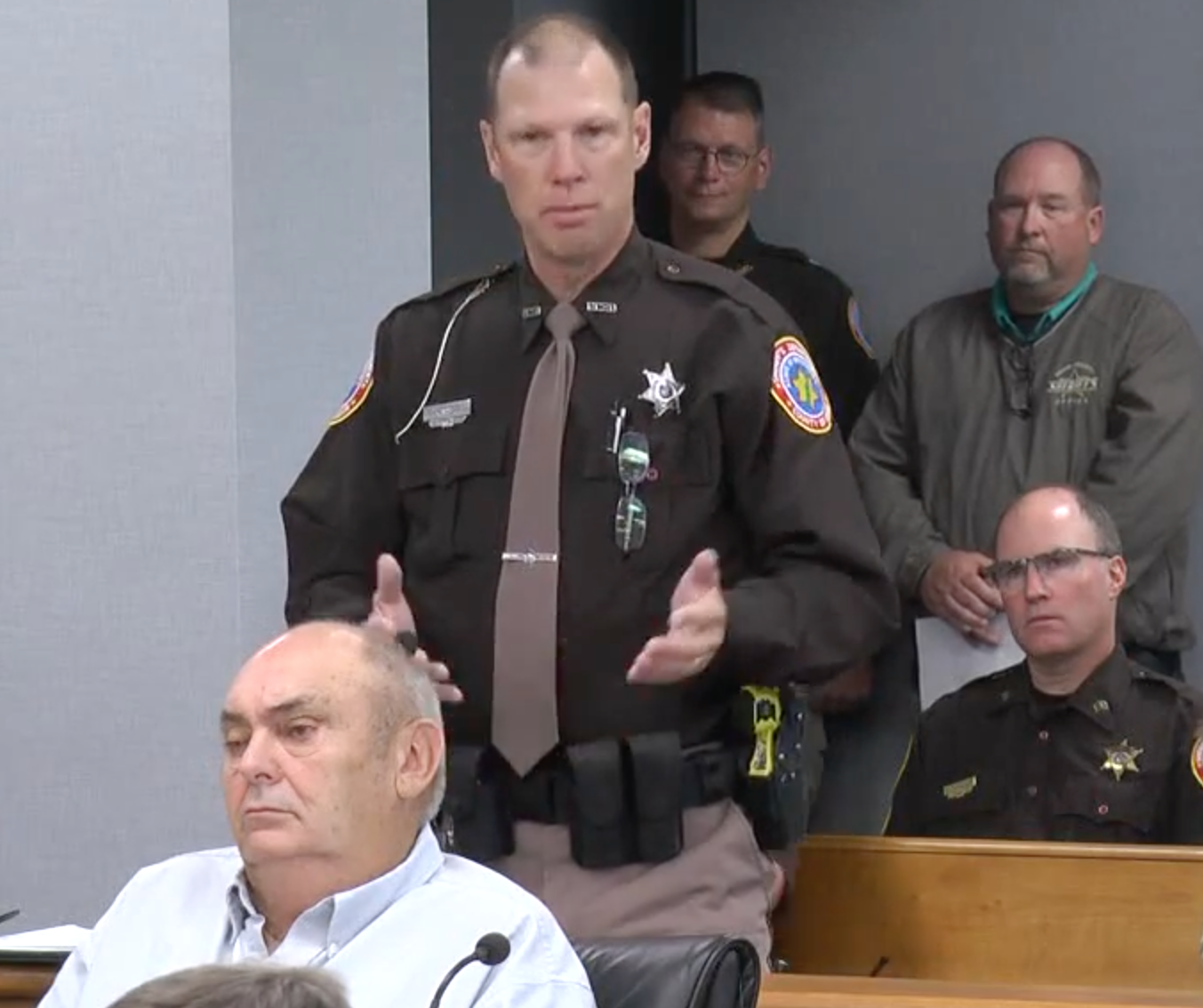 Court Security Officer Mark Schwartz read letters from Door County’s two judges, outlining why the two court security officers should not be removed from protective status. The county board agreed.

“A deputy sheriff is a deputy sheriff,” Vogel said. “To change that right now, I think you’re taking a step back as a county. I don’t think you can afford to.”

County Administrator Ken Pabich and Corporation Counsel Grant Thomas tag teamed on presenting a case for removing jailers from protective status, based on statutory criteria, the most significant part of that being that at least 51 percent of duties must consist of active law enforcement.

Sternard and other supporters of keeping jailers protected argued that jailers simply serve in a different branch of law enforcement, but it is law enforcement nonetheless.

A former employee of the Kewaunee County Jail who now works in Door County had said at an earlier meeting on the subject of protected status that he came to Door County for that stability when Kewaunee County changed its employment policy for jailers.

To hear Kewaunee County’s side, Pabich invited his colleague from that county, Administrator Scott Feldt, to present their case.

“We do not believe they met the three statutory requirements,” Feldt said.

Several people had mentioned that jailers are sworn deputies, but Feldt said that is meaningless since the sheriff has the authority to swear in anyone as a deputy. He admitted that Kewaunee County has seen turnover at the jail, but he said that is a statewide trend attributable “to a large variety of things.”

Thomas said the position of jailer is not listed as a protective status position. He pointed out that 60 of the state’s 72 counties have removed jailers from protective status and not one of them has reversed course.

“Are we that much different from the other 60 counties?” he asked.

Pabich asked rhetorically if the county could provide the same level of service and treat employees fairly, “We think the answer to both of those questions is yes.”

He added, “Either way we’re going to carry on with strong leadership to make it the best work environment possible. I guarantee that.”

Jon Koch and Richard Virlee, two former Door County Sheriff deputies and longtime board members, were among those who weighed in against making the job classification change.

“Just because 60 counties have changed doesn’t mean we have to,” Virlee said.

“It’s a hazardous place,” Koch said of the jail. “This is a high-risk job. They have to stay mentally focused and prepared on a daily basis.”

Supervisor Megan Lundahl said she polled constituents and “not one person understood there was less danger in jail. Most consider it more dangerous than patrol,” she said.

Supervisor Susan Kohout said the board would not even be considering this change if the county were not up against levy limits.

“We need a change. This is unsustainable,” she said of the levy limits.

Kohout said she conducted an informal poll of other counties at a recent Wisconsin counties convention and found the counties still with jailers under protective status felt pretty comfortable while the others were dealing with turnover.

“Jails are much more dangerous now than they used to be,” she said. “I simply don’t agree with the interpretation of the three-part criteria. There’s no way I can say yes to this.”

“When somebody puts a badge on, they’re in active law enforcement. Period,” said Supervisor Joel Gunnlaugsson, who chairs the county’s Public Safety Committee.