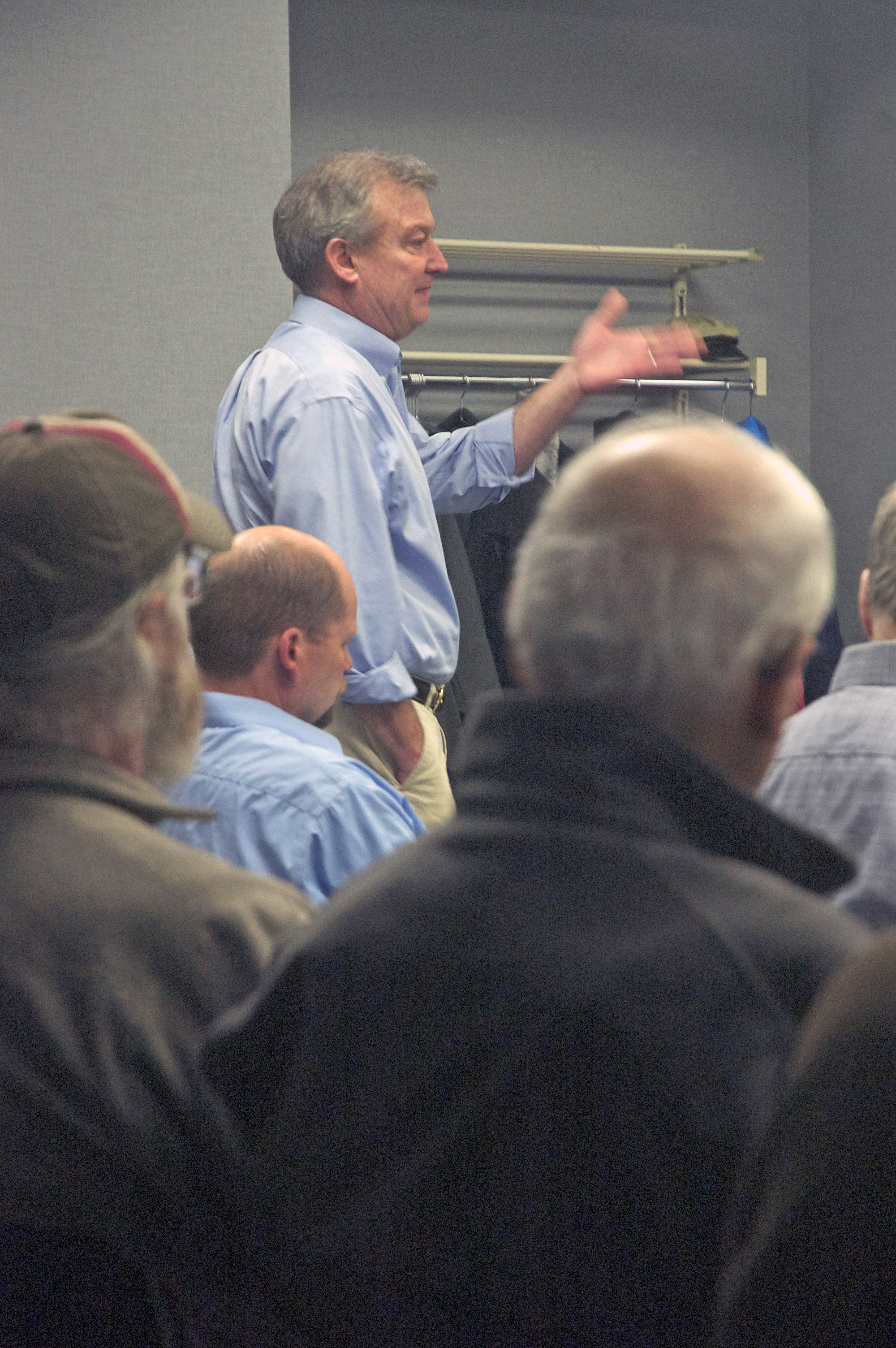 Rep. Joel Kitchens talks about the administrative rule changes that are being drafted specifically for the karst region of the peninsula during the Feb. 13 meeting about the permit renewal for Door County’s only CAFO. Photo by Jim Lundstrom.

Residents from Door and Kewaunee counties weighed in at a special meeting on CAFOs held Feb. 13 by two Door County committees.

Door County’s Board of Health and Land Conservation Committee (LCC) were convened jointly, specifically to discuss a permit renewal for the county’s only CAFO, S&S Ag Enterprises.

“Many of us feel we have taxation without representation,” said William Iwen of the group Kewaunee Cares. “We’re not being listened to. We feel we’re more of a nuisance than anything.”

Brussels resident Darrel Karas talked about 1.3 million gallons of manure from a Kewaunee County CAFO that was dumped on land around his own farm last spring, and suddenly the nitrate levels shot up to unacceptable rates in his well. He also mentioned counting 99 semi-trucks dumping manure on less than 35 acres last November.

“I’ve taken pictures of the last time they were on the roadway,” he said. “In my mind it was a manure spill. It should have went on the field. It did not.”

LCC Committee member Randy Halstead asked Dale Konkol of the county’s Soil and Water Department what is the NPK (nitrogen, phosphorus, potassium) content of a semi container of manure.

“About two bags of lawn fertilizer is the nutrient content in a semi-truck,” Konkol said. “It’s not a lot. It’s so much water.”

Which prompted Board of Health member Steve Sohns to say he hoped the DNR, which has oversight of CAFOs, would promote better management practices to lower the water content in the manure.

“We’ve been working on that topic,” Konkol said. “Technology will help us in the future on some of this stuff.”

Wayne Kudick of Fish Creek identified himself as from a farming family in Kewaunee County. He said he knows people there are afraid to speak out against CAFOs, and suggested that DNR hearings are perfunctory, that the DNR has never denied a permit, and that people aren’t going to come to this “mecca of greenness” if it’s fouled by manure. And he reminded the room, “We vote. Cows don’t.”

First District Assemblyman Joel Kitchen, a large animal vet by trade, was in attendance, and he pointed out that a committee is working on new ag rules for the karst peninsula. The rules are being fast-tracked – start to finish in one year instead of three to five years – and are scheduled for completion in the fall. He suggested the opportunity to be a part of change is to voice support for the new regulations once they are unveiled.

S&S Ag is owned by Randy and Dena Schmidt and is located in Forestville. According to a DNR announcement of a March 2 permit hearing in the Town of Forestville, S&S Ag has 6,395 “animal units” and has proposed expanding to 10,177 “animal units” by April 30, 2022. The waste from those “animal units” is spread on 11,403 acres in Southern Door – 871.5 acres owned by the Schmidts and 10,531.5 acres rented from others.

Every five years CAFOs must renew their Wisconsin Pollutant Discharge Elimination (WPDES) permit, and it is during the application process that the CAFO operator projects the growth of his or her herd during that time. So the nearly 4,000 cows added to the S&S operation are just projections of what might possibly take place.

In the DNR announcement for the hearing, there is also this line: “The Department has tentatively decided that the above specified WPDES permit should be reissued.”

The notice states that this “informational” hearing is being held so members of the public can comment on or object to the proposed permit action, the terms of the nutrient management plan S&S has to abide by, or the [manure] application. This can be done at the hearing, or in writing to Brad Holtz, DNR, 2984 Shawano Ave., Green Bay, WI 54313-6727 or [email protected]

Several audience members wanted to see the county immediately take a stance, confront the DNR for “not doing your job” and either set a cap on how many cows can be in a Door County herd or not allow permits until new standards are set for karst regions.

Board of Health member Megan Lundahl also lent voice to a herd cap or the county making some sort of strong statement to the DNR about CAFOs.

But Corporation Counsel Grant Thomas advised a more finessed approach, saying he and Dale Konkol of the county Soil and Water Conservation Department will meet with DNR staffers before the March 2 hearing to let them know county concerns in the matter.

Thomas said S&S Ag has been operating as a CAFO for close to 10 years now. “They’re sort of in the news now because of the permit issuance and five-year projection to increase herd size,” he said.

Thomas also pointed out that Door County has been a leader in oversight of agricultural manure management. “We were, as far as I know, the first county to enact an ordinance that adopted the state standards for manure management prohibitions,” Thomas said, which allowed the Soil and Water Department to chase grants for cost sharing to get farms under their jurisdiction into compliance.

But LCC Committee Chair Ken Fisher said people in the audience and in the community are looking to elected officials to protect the water from manure pollution.

“I think we know why we have water problems,” Fisher said.

Declaring himself pro-farm, Fisher said he understands farmers have a right to farm, but, he wondered aloud, where does their right to farm supersede my right to drill a well and have clean drinking water?

“That is my right and they shouldn’t attack that,” he said. “I want to know right now. I want to know yea or nay, right now. Are we getting bad drinking water because of farming practices? It’s a yes or no question.”

“Ah, nobody wants to say it but we all believe it is,” Fisher said.

This is how Thomas described the problem: “The reason we find ourselves in the quandary that we’re in is that the agricultural standards for manure management prohibitions as they exist, even when they are followed, and they are followed by the vast majority of operators in the state, are not sufficient to protect the groundwater in sensitive areas.”

Thomas was directed to write a cover letter from the county, along with a Nov. 14 letter written to Brad Holtz of the DNR by Konkol last November regarding several issues his department has with an August 2016 DNR letter outlining conditional approval for the S&S Ag nutrient management plan and WPDES permit.

Konkol recommends the DNR adhere to a “six-step soil over bedrock determination procedure.” Konkol also takes issue with the DNR’s standard determination of 24” depth of soil for manure spreading by a CAFO. He points out that “the Town of Brussels has three large sinkholes located in closed depressions with greater than 24” of soil. These sinkholes are direct conduits to the town’s drinking water…It is our recommendation that the DNR limit manure application in the closed depressions regardless of soil depth.”

Finally, Konkol concurs with a DNR finding that some fields in the nutrient management plan are next to or close enough to the Ahnapee River watershed to deliver sediment and phosphorus. But the county wants the DNR to conduct further study to address stormwater runoff, quantity and quality from production sites and the impact they have on the Ahnapee River/Forestville Millpond watersheds. Konkol calls for three things to be done:

The March 2 hearing at the Forestville Town Hall begins at 9 am.