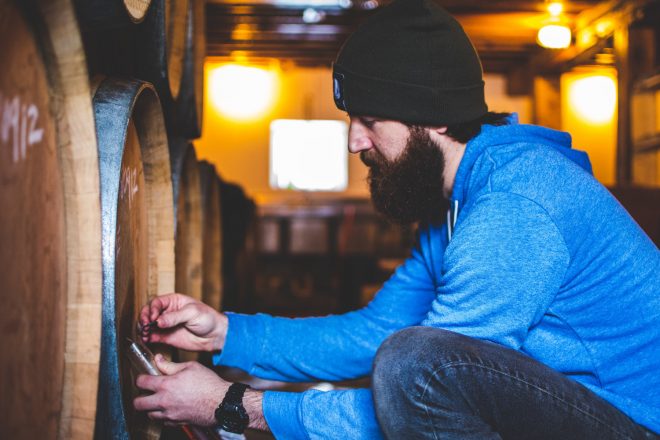 During the early stage of the pandemic, probably around May or June of last year, I remember hearing on the radio that retail alcohol sales were up significantly across the country. That wasn’t very surprising to me, considering that nearly everyone was spending almost all their time at home. And, as someone who has thus far made beer a sort of career, I was very pleased to see that consumers were showing support.

As the situation continued, however, my glee disappeared: Nearly all the market growth for beer was going to macro producers, not craft brewers – and specifically, to large cases from these macro brewers. Although this information was disappointing, it did also make sense. During a time when people were avoiding their regular grocery-shopping trips in favor of stocking up, it made sense to buy the largest package of beer possible, and ideally, something shoppers knew they would like.

After this initial report, I hadn’t heard any more about how the craft-beer industry had fared, so I checked in with two of my favorite brewing buddies in the county: Matt Sampson, director of brewing operations at Door County Brewing Co. and Hacienda Beer Co. in Baileys Harbor; and Trent Snyder, head brewer and general manager of Bridge Up Brewing Company in Sturgeon Bay.

The closing of locations for on-premise consumption affected craft brewers the most. Before COVID-19, an estimated 45% of the smaller craft breweries tended to favor on-premise sales, according to the Brewers Association. Because of COVID-19 restrictions, these on-premise locations disappeared overnight, and it took a few months before they were once again a solution for craft brewers.

Members of the front-of-house staff for the Door County Brewing Co. (DCBC)/Hacienda Beer Co. (HBC) taproom in Baileys Harbor were laid off overnight, and the brewing staff was quick to follow.

“We stopped making beer because we didn’t know what would happen,” Sampson said.

COVID-19 has affected Bridge Up Brewing Company from the beginning because its grand opening had been set for spring 2020. Not only was the opening delayed, but a big grand-opening party that Snyder had planned – involving caterers, local bars and restaurants, and many guests – had to be canceled. Instead of a big party to introduce the brewery to the community, it instead operated quietly out of its location beneath Sonny’s Pizza.

Breweries across the country, including our local craft breweries, used COVID-19 as a catalyst to get creative.

When restrictions began to lift a little, Sampson and the team at DCBC/HBC got brewing again, but they had different plans for the beer.

“We started brewing into the barrel room because that would take six months to a year to mature,” Sampson said. This longer time frame allowed the brewers to get back to work, but it also gave them a nice window during which to figure out what their future plans might be. Distribution was still on hold, and almost all the beer was going directly to cans.

For Snyder, who had operated only during COVID-19 restrictions, creativity was a must. The location beneath Sonny’s Pizza brought in a significant number of customers who bought packaged beer.

“Being below a pizza restaurant helped,” Snyder said. “We had crowler fills, growler fills, six-packs to go with pizza.”

Bridge Up Brewing’s location by the Sturgeon Bay canal also allowed for outdoor seating that was safe and practical for those who wanted a sort of “on-premise feel.”

The “COVID lifestyle” worked well with what Snyder intended for his brewery’s product. He encouraged people to purchase some of his beers to take with them on whatever adventure they were on that day.

“Take [our beer] in the boat; take us to the beach; take us to your cottage,” Snyder said. “We want to be part of your vacation.” These are his beer goals for every year, in fact, not only for 2020.

The Cherry Hut opened this past spring and has served as a second taproom for Bridge Up Brewing, which Snyder calls “Bridge Up North.” It also offers guest taps, a wine bar, kitchen and farmers-market-style shopping.

Regarding the building’s design, Snyder said, “COVID drove the design on this place. We don’t have an indoor taproom. People feel more comfortable outside. People have learned to enjoy being outside.”

Although the outdoor-only seating isn’t a long-term plan, the comfort people have found during the past year with eating and drinking outdoors allowed The Cherry Hut to open sooner and work on implementing indoor options later.