• Crows and ravens are pretty smart birds. They can use tools, and in times of excess, they bury food caches (nuts, seeds, etc.) under a thin layer of soil. They remember the location of caches, because after flying around a few days they can drop by a cache for a meal. Since they have little sense of smell, this sense is not a factor. Scientists have learned that crows are also good at remembering human faces – and they can link a face with whether the person is “good or bad.” 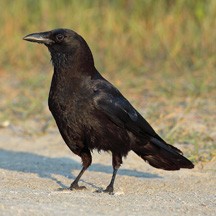 This discovery was made by researchers wearing rubber human masks as they went around campus annoying crows by banding them. A few days later the researchers walked through the same areas (where banding occurred) wearing assorted masks to see how the birds responded. At each site the birds ignored researchers who wore masks different from the ones they wore when banding. But when a researcher showed up wearing the same mask he or she wore when banding the birds, they responded with loud, scolding cries and collected together in agitated groups. Seven years later, researchers walked around campus wearing the same masks they wore when banding crows seven years previously. Again the birds squawked and begin haranguing the “bad” researchers. Over the years, it appears that new crows arriving on campus quickly learned from the old-timers that the person behind that mask is not to be trusted. (nwf.org, “Crows Can Distinguish Faces in a Crowd,” National Wildlife Federation, Nov. 2012; C. Savage, “Bird Brains,” 1995, Sierra Club Book)

• Mice have proven useful in personalizing some types of cancer treatments. For example, a 61-year-old man with pancreatic cancer had pieces of the cancer transplanted into 17 mice. Once the cancer started to grow in the mice, scientists tried various kinds of treatments on the mice to see which was most successful in causing the tumor to shrink. It was found that this particular cancer was highly sensitive to a drug called mitomycin C. After treatment with this drug, the man’s cancer went into remission and he lived for almost seven years. (Science News, March 23, 2013)

It is very important that people with hearing loss be tested by an audiologist, for the condition gets worse with age. Sadly, one study found that only one in seven adults who could benefit from hearing aids used them. Although good hearing aids are expensive and not usually covered by insurance, one has to weigh the cost against the possibility that hearing loss might lead to creeping dementia. (Brain in the News, Feb., 2013; The New York Times, Feb. 11, 2013)