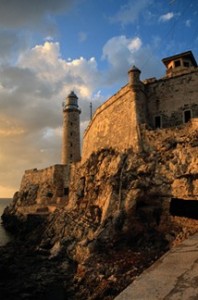 On Nov. 14, the Kiwanis & Rotary Clubs of Northern Door will present the third program of their Travel & Adventure Cinema Series, “Cuba: A Road Trip from Havana to Santiago de Cuba.” The recently produced high-definition film showcasing our controversial island neighbor will be hosted live by award-winning cinematographer Marlin Darrah, probably the world’s most traveled filmmaker. Darrah’s 34 years of production experience have taken him to more than 140 countries worldwide, yielding more than 70 documentary and travel-adventure programs to date.

Darrah describes Cuba as ‘the most mysterious, misunderstood, yet tragically beautiful island in the Caribbean.’ Viewers will be taken on a road trip traversing the island nation in a classic 1950s black Buick, traveling from Havana to Santiago de Cuba. In fact, Darrah reminds movie-goers that with the Revolution in 1960, all U.S. car imports came to a screeching halt, hence providing visitors with constant visual reminders of vintage Americana in the form of many old U.S. Dodges, Chevys, and Chryslers scattered along Cuba’s landscapes.

Stops along the way include Havana, Pinar del Rio, the beaches of Matanzas, Cienfuegos, Camaguey and the carnival city of Santiago de Cuba.

Showtime is 7:30 pm at the First Baptist Church of Sister Bay. Tickets may be purchased at the door. Admission price is $7 and children under 18 are admitted free. Upcoming films include journeys to China, America’s parklands, and exploration of the ancient Mayan civilizations of Central America and Mexico. Refreshments will be available during intermission. For more information, contact Gary at 920.854.4825 or Larry at 920.839.9419.