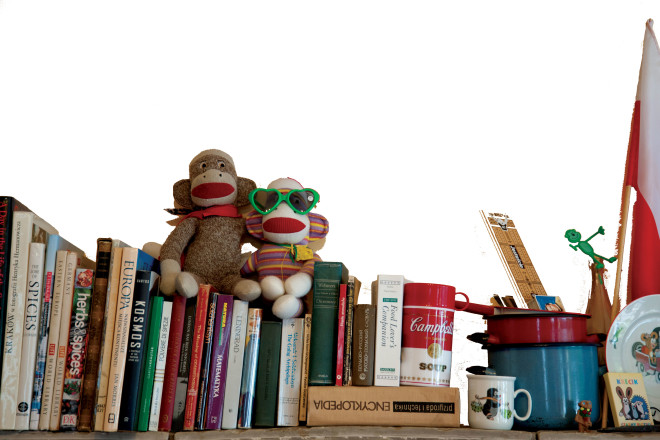 Last winter, while most Door Countyites were tucked in and enjoying some hard-earned downtime, Paul Wanish was busy creating a savory addition to historic downtown Ephraim. Just 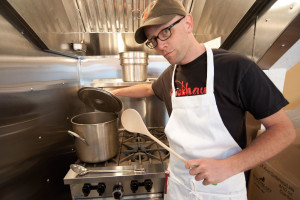 a block from the water and a stone’s throw from Leroy’s Coffee, Czarnuszka Soup Bar is an unexpected delight. Located in a cozy cabin with a wood-burning fireplace, rustic walls with bright and surprisingly soothing orange trim, and a sparkling six-burner stove full of boiling pots, Czarnuszka looks good, smells good and just plain feels good. Welcome to Door County’s first and only dedicated soup bar.

Most every hour open, Wanish is there to greet you. The first things you’ll notice are his wide and welcoming grin, his calm demeanor, and his enthusiasm for serving you a cup or bowl of soup from his rotating menu. The house soup, available every day, is Bohemian Potato Chowder. It’s 100 percent vegetarian, but don’t let that fool you into thinking it’s light fare:  this slightly sour, potato-hearty soup full of rosemary and other herbs is filling, and – you heard it here first – destined to become as Door County as fish boils and Swedish pancakes.

So what’s with the name? On our little peninsula full of Olsons, Smiths, Nelsons and Johnsons, hanging up a shingle full of Cs and Zs causes us to stumble a bit. Czarnuszka, pronounced Char-NEW-shka – best not to try it with a mouth full of soup – is Wanish’s favorite Polish word.

“It’s full of so many letters,” he almost brags. “It’s fun to look at and even more fun to say.” Not coincidentally, it’s apropos for the venue. Czarnuszka is the Polish word meaning “wild onion seed.” During communist rule, salt and pepper were seen as luxuries, and folks began filling their pepper grinders with this abundant seed, which grew in the wild; it continues to be used today and is recognizable by its slight aftertaste of caraway and cumin. Wanish keeps a jar of it on the counter for easy sampling.

“I lived in Poland twice, for a period of a few years,” said Wanish. “My favorite places to eat were the bar mleczny, the Polish government “milk bars” that were established after World War II, offering inexpensive and healthy foods for the working class. I began thinking of creating a place like this in Door County, where w 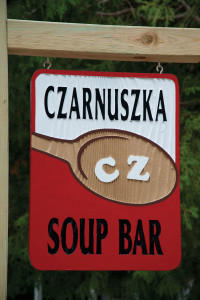 Czarnuszka emphasizes eastern European cuisine, serving Bulgarian Cucumber soup, Ukrainian Chicken soup, Lithuanian Beef soup and other savory stews. Wary of such adventurous eating? No worries. The menu also includes more conventional soups like Tomato Florentine, Tuscan Sausage, Creamy Broccoli and Beef Barley. I conducted a very formal taste test (10 family members and friends, ages 7 to 71, armed with soup spoons). We tried four of the soups mentioned above, plus one other that we forgot the name of but referred to as “the sweet, carroty, spicy one.” Two enthusiastic thumbs up:  every soup was a winner, even with the picky teenage eaters.

Just as Czarnuska’s soups take a while to simmer, so, too, did Wanish’s dream take time to become a reality. Four years ago, he prepared a business plan with the help of the Door County Economic Development Corporation’s NxLevelTM Entrepreneurial Training course. He then looked around for the perfect location, attempting to lease a space prior to discovering the current locale, which was a former retail shop, slightly neglected and owned by a bank. Next came approval from local zoning authorities, the installation of the required sinks, stoves, floors and hoods, and then the finishing details of paint, art, tables and chairs. The indoor space is tiny, seating a cozy 10 to 12 customers, and the outdoor tables in front and back add comfortable three-season dining.

“It’s small, but it lends itself well to what we do,” he says. “People really like the location. Leroy’s is a big draw. They send people here, and we send people there. It’s a good place to do business. ”

Besides tasty fare at a reasonable price, a great deal of Wanish’s success comes from word of mouth. Wanish has worked in restaurants from Las Vegas to Milwaukee, and has cooked in this county’s kitchens for over two decades. He has a reputation for being a hard worker, an enjoyable co-worker, and a competent and creative cook. Outside of work, Wanish has a huge following of loyal friends and is known for his colorful, energetic and eccentric personality. If you don’t have plans for Super Bowl Sunday, check the Peninsula Pulse for a classified ad inviting you to hop on a bus and join Wanish and friends for the Nor-Door Chili Run, a day-long jaunt through Northern Door chili-serving taverns, culminating in bellies full of chili and a big screen full of football. Locals also know that Wanish’s name typically comes up when referring to an oft-seen and possibly mystical drumming rabbit-chicken. Yes, a rabbit-chicken. When I mention this, his face goes blank and he pauses before he speaks.

“I’m not sure what you are talking about. Every Saturday, however, I do serve Rhythm Chili, a meaty, manly, hearty recipe acquired from the Rhythm Chicken himself.” Enough said. 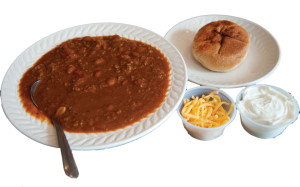 The menu changes daily and is posted on Facebook early enough for you plan your lunch or dinner. It always contains four soups (each served with petite Kaiser rolls baked fresh every morning) and two fresh sandwiches. A cup of soup is $4, a bowl is $5, and a quart of soup is $9. Sandwiches are $4 or $3 with a cup of soup.

In the fall, Czarnuszka Soup Bar opens at 11:00 am and stays open until at least 7:00 pm (closed Mondays), when things start to slow down. Wanish says, “I’m usually in the kitchen early, and people often stop by while I’m making soups. Or, if it’s a busy day, or a festival weekend, or if we just feel like it, we keep the door open later.” In the spirit of the Polish bar mleczny, always welcoming.