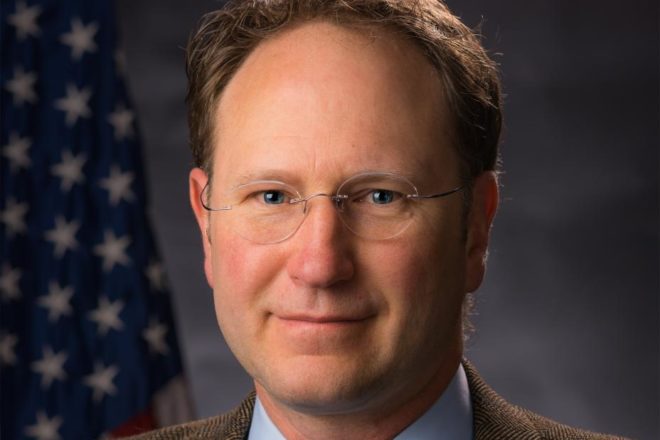 A year after his reign as the Environmental Protection Agency’s (EPA) “Great Lakes czar” under President Barack Obama concluded, Cameron Davis is making the rounds to rally support for the Great Lakes basin.

Davis touched on a variety of topics during a discussion at the Baileys Harbor Town Hall on Aug. 11, including invasive species, federal funding for Great Lakes protection, and the intersection between ecology and public policy.

“If there is nothing else you take away from tonight it’s that the vital relations between science, land use, economics and politics have a tremendous impact on the fate of the Great Lakes,” Davis said.

The Evanston, Ill.-based environmental policy expert helped deliver more than $2 billion to the Great Lakes region through the Great Lakes Restoration Initiative (GLRI). President Donald Trump has proposed eliminating the GLRI’s $300 million in funding, but Davis believes the GLRI will survive the proposal.

“It was a grave affront to every state that swung the election,” Davis said in a nod to Trump’s unexpected wins in Wisconsin and Michigan, states that had not voted for a Republican nominee since 1984 and 1988, respectively. “We have built a strong bipartisan wall around this program.”

However, Davis is concerned about the lack of funding in other parts of the EPA, which administers the GLRI funds.

“The GLRI is only as strong as agencies’ base budgets are that support it,” Davis said. “If budget and staff cuts affect the agency as a whole the agency may use part of the GLRI to fund other programs. We want to see those programs laser in on that [Great Lakes]. Budgets are not just numbers, they are a statement of our values.”

Davis said state natural resources agencies can often rely 100 percent on the GLRI for funding beyond essential needs, adding that the fight against the invasive Asian carp by the Illinois Department of Natural Resources has been entirely funded by GLRI funds.

Davis believes technology will ultimately thwart the Asian carp invasion of the Great Lakes. His statement comes on the heels of an Army Corps of Engineers report that was previously withheld by the federal administration seeking $275 million in funds to stop the advance of Asian carp in Illinois’ Des Plaines River.

“We have to be prevention oriented,” Davis said. “We have to look beyond biological, chemical and physical linkages, we have to anticipate political, economic, financial, technological, informational and changes in the media as they may affect the Great Lakes.”

Presenting the example of declining income for farm families in the Great Lakes region due to debt and trade policy, Davis said farmers may be looking to farm on marginal land that would have a detrimental effect on the watershed. While the initial answer would be to prohibit farmers from doing so, Davis suggests looking at the economic forecast and adjusting other policies to prevent that move in the first place.

Similarly, better forecasting technology of the environment, species movement and ecological conditions is a proactive way to prevent issues from arising in the Great Lakes.

“If we have these indicators for the economy, what if we had the tools in place to help us forecast the changes in landscapes?” said Davis. “The idea really isn’t that far off.”