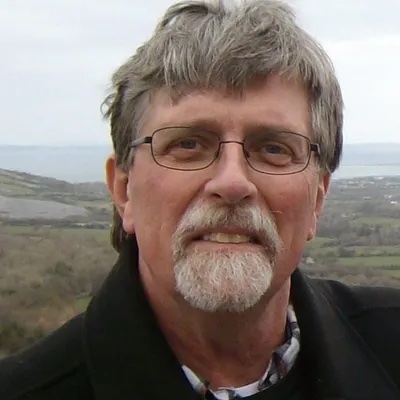 Dan Powers grew up in Chicago but has lived in Door County since 1986. He worked in the Sevastopol School District until 2003, then for 10 years in the Howard-Suamico schools, where his work coaching staff and students about writing and reading motivated him to pen his debut novel in retirement. Learn more at danpowerswrites.com.

Where did the idea for your novel, How Long a Shadow, come from, and what’s it about?

My Chicago roots reach back to the 1850s. While working on family genealogy some years ago – mostly because of the lack of family stories, especially about my paternal grandfather – I experienced how the past slowly emerges through the generations and mingles with the present, leading to questions of self and identity. The characters and plot of How Long a Shadow emerged from that experience.

For Kevin Cullerton, the main character in How Long a Shadow, Door County is a contrast to his family history and his earlier life in Chicago. This is true for a lot of the former Chicagoans who are drawn to the county.

I usually have only a general idea when I begin each day. That acts as a seed. I begin by rereading, revising and pruning the previous day’s work before going forward with new material. I’ve learned to trust that in the new work, new seeds will emerge that I’ll find worth keeping and expanding the following day.

What are the most important elements of good writing?

I think good writing focuses on three key elements: idea, organization and word choice. If these are strong and well crafted, readers will engage with the text, no matter the genre.

Think realistically about your purpose, goals and time frame for getting your work out. Research the options, and talk to others. Each method has pros and cons to consider.

More important than a particular book, I’ve found that the idea of “reading like a writer” has been valuable. As I read, I pay attention to what the author is trying to do and how he or she is doing it.

Are you currently working on a writing project?

I’m working on a second novel based in a school setting. I hope to finish it this year, but my deadlines are always soft.

Where can readers find your book?

Novel Bay Books, OtherWorld Books & More and The Pearl of Door County in Sturgeon Bay, and Yardstick Books in Algoma. Any bookstore can order it, and it’s on Amazon and Kindle.

Excerpt from Dan Powers’ novel, How Long a Shadow

The doors opened like huge gaping eyes, daring him to step forward. A few passengers disembarked. Ed placed his hand on his brother’s capped head and stepped forward. “Come on.” Jimmy knew he’d have taken his brother’s hand if it had been offered.

They sat facing forward, Jimmy closest to the window. The car gave a jerk and gathered speed. Sure in the route and familiar with the sounds and sights, Ed relaxed against the back of the seat and closed his eyes. Jimmy tried to keep his body still so as not to disturb his brother, while his head swiveled, not wanting to miss a thing. The rhythmic clacking of the rails and the regular stops and starts lulled him at first. Gradually, as buildings began to huddle closer and closer together and appear to move in closer and closer alongside the rails, he became more and more uneasy. The tracks elevated, living up to their moniker. He was startled by the whir and blur of the flats that now seemed keen to take his arm off if he was foolish enough to stick it out the window. He was being inhaled into the depths of the city. Stained brick walls and mullioned windows, back staircases with peeling paint and flat tarred roofs leaned in on the passing train. Wall, window, window, roof, wall, broken window, child’s face, stairs, wall, window flew by in such a blur Jimmy needed to turn his gaze forward to keep from going dizzy. The bright autumnal sky disappeared, replaced by flashes of light flung at them through the tight, narrow slits between buildings.

… Ed leaned across and said to him as softly as he could while still being audible, “When we get there, just let me do the talking – and don’t be asking no questions.”

Jimmy turned to his brother, also keeping his response low, instinctively wanting to keep family matters private. “What’s he like? I mean, I know I’ve seen him, but I don’t remember – except he seemed tall and looked kind of old.”

“Well, you’ll see soon enough, won’t you?” Ed considered a moment and added, “He’s mostly angry and all stiff-like, at least around me. I guess being the oldest, he figures I remember the most and hold the biggest grudge. Or maybe I’m like some kind of mirror for him, and I bet sure, he can’t like his own reflection much. Sometimes I think he’s just a big showoff, you know … trying to be manly and acting all put out like we’re stealing his money. I think he must feel guilty about being so … you know being our pa, but not a real one.” Ed’s face tightened. “Heck, most times I just hate the selfish old bastard and wish I didn’t have to come for Ma’s money.”

The last sentence stiffened Jimmy into his seat. His brother’s sudden anger and hurt startled him. He’d not seen it before. It was something new and raw, and he didn’t want to hear, or feel it, not now … not just before meeting his own father … not today on his birthday. He closed his eyes against the words which had landed in his stomach like a gut punch.