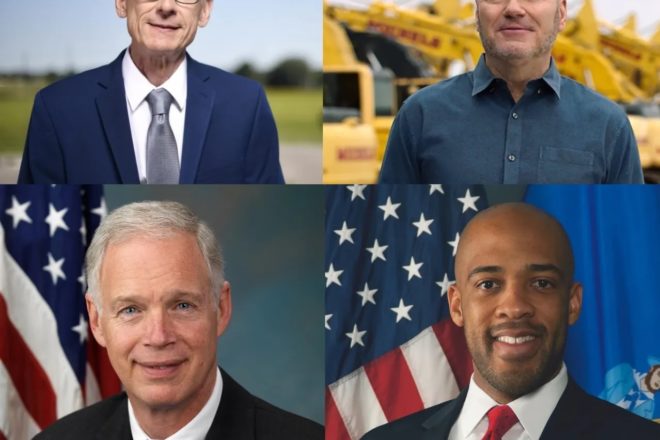 by PETER CAMERON, The Badger Project

Most ballots have been counted in Wisconsin’s 2022 election, and the top vote-getter across all races is Democratic Gov. Tony Evers, who won reelection by receiving about 1.36 million votes, according to the Associated Press.

At about 1.34 million votes, Republican Sen. Ron Johnson garnered the second-highest total, followed closely by his opponent, Lt. Gov. Mandela Barnes, a Democrat, who received a little more than 1.31 million – about 1% short of upsetting the incumbent.

Republican gubernatorial candidate Tim Michels finished near the bottom of all statewide candidates in Wisconsin, with about 1.27 million votes. He lost to Evers by about 3.5 percentage points. Only state Rep. Amy Loudenbeck, the Republican candidate for secretary of state; and Aaron Richardson, the Democratic candidate for treasurer, received fewer votes than Michels.

Victories in the races for governor, attorney general and likely the secretary of state would give Democrats three of five statewide offices, including two of the three high-profile positions in this election. In addition to Johnson’s victory, Republicans won the state treasurer’s race by about 1.4% of the vote.

The race for governor of Wisconsin was likely the most expensive gubernatorial campaign in the country. Evers outraised Michels $42 million to $25 million in direct donations, according to preliminary data. And about 70% of Michels’ total came from the multimillionaire businessman himself, with his donations to his campaign adding up to at least $18 million.

Independent political groups tried to make up the difference, as groups aligned with Michels spent at least $13 million on political messaging. Much of that was TV and radio advertisements attacking Evers and supporting the Republican, according to the Wisconsin Democracy Campaign, which tracks campaign-finance data in the state. That total was about three times more than independent groups allied with Evers spent – approximately $4 million attacking Michels and supporting the incumbent.

Joe Heim, a political science professor emeritus at UW-La Crosse, in an email credited Evers’ win to “the powers of incumbency” and “his moderate approach,” which won over the criticisms of his lack of strong leadership, criticism of his handling of the Kenosha riots and his mediocre favorability ratings, among other things.

Evers “came across as more experienced, especially in education, than his opponent, who also may have alienated some with his relentless negative advertising and primary vote against an establishment-supported Rebecca Kleefisch,” Heim said.

Ed Miller, a political science professor emeritus at UW-Stevens Point, said in an email that Evers had a stronger negative campaign, running attack ads against Michels.

“Even though people say they hate [negative] political ads, they are effective,” Miller said. “Of course, most negative ads are sponsored by outside groups.”

Johnson, who unseated Democratic incumbent Sen. Russ Feingold in the Republican-wave election of 2010, has been very lucky, running in years when Republicans were expected to do well: 2010, 2016 and 2022, Heim said.

Johnson was also lucky to be running against a candidate who publicly flirted with unpopular issues such as defunding the police and abolishing U.S. Immigration and Customs Enforcement, which clearly came back to haunt him when they showed up frequently in TV ads, Heim said.

“Barnes did not run a very good campaign, in my opinion,” he said. “Johnson’s campaign was effective in labeling his opponent as more extreme than Johnson was.”

Barnes outraised Johnson in direct donations – about $35 million to $32 million, according to preliminary data – but outside groups aligned with Johnson spent more than $76 million running ads attacking Barnes and supporting Johnson, according to preliminary data. Outside groups aligned with Barnes spent about $50 million attacking Johnson and supporting Barnes.

All statewide incumbents on the ballot – Evers and Johnson, as well as Attorney General Josh Kaul and Secretary of State Doug La Follette, who are both Democrats – appear to have won their races.

“When you look at the state’s [relatively strong] economy, with low unemployment and most issues [being] more national and under the control of others, voters chose to stick with the known candidates rather than change,” Heim said.

At the time of this writing, La Follette had not officially been called the winner, though he was leading by about 8,000 votes.

Alisa Von Hagel, a political science professor at UW-Superior, noted the oddity of the Democrat Evers and the Republican Johnson both winning during a hyper-partisan era when ticket-splitting – voters choosing candidates from both parties on their ballot – is rare.

She suggested that the ticket-splitting in Wisconsin that decided the major statewide races may have come down to the quality of the candidates and possibly the power of familiarity.

“Incumbency status is always a boon for candidates when running for office, and it may also have influenced the election outcomes in Wisconsin,” Von Hagel said.

A Political Future for Barnes?

In his concession speech last week, the 35-year-old Barnes said he was looking to the future.

“Just because we did not get across the finish line, that does not mean it’s over,” he said.

One possible path for Barnes would be running for Evers’ job. The governor has experienced health issues – he’s a cancer survivor – and would be 75 at what would be the start of his third term in 2027. Those circumstances could open the door for Barnes and other Democratic candidates.

Barnes’ narrow loss to an incumbent, albeit an unpopular one, could signal strength for another statewide run.

The ideal scenario for Barnes over the next four years, Von Hagel said, would be to “remain in public view and serving in public office – perhaps an appointed position in the governor’s office or something similar.”

The Badger Project is a nonpartisan, citizen-supported journalism nonprofit in Wisconsin.