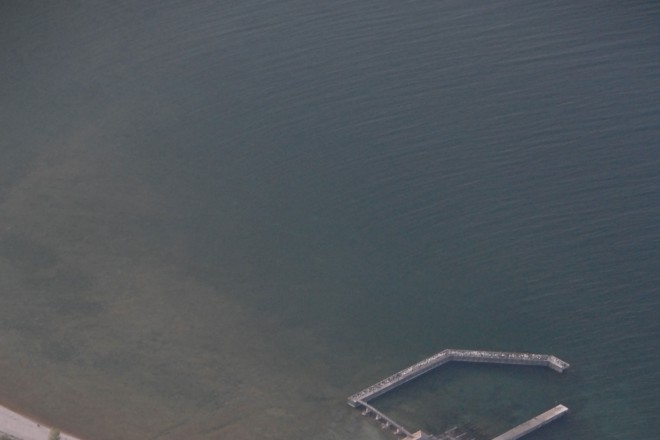 For over a century they served as beacons for ships and fishermen in the treacherous passage through Death’s Door, the foreboding stretch of water between Lake Michigan and Green Bay at the tip of the peninsula that would steal its name, Door County. The lighthouse on Plum Island and the range light on Pilot Island stood as hopeful guides in a sea of lore, but they, too, would one day require a guide to keep their lights burning.

As time passed and the construction of ships and navigation techniques advanced, the lights would become unnecessary. In 1962 the United States Coast Guard abandoned Pilot Island, and in 1991 they left Plum Island as well, moving their Northern Door summer operations to Washington Island.

Left behind were the once-proud beacons of Death’s Door, taking a beating through harsh winters and falling into sad disrepair.

Last October the islands were transferred to the United States Fish and Wildlife Service (USFWS) to be managed as part of the Green Bay National Wildlife Refuge. Sadie O’Dell, a USFWS Wildlife Biologist, said “the island ecosystem provides a critical stop-over for migratory birds, including bald eagles, shore birds, and raptors.” The islands serve as a safe, undeveloped place for birds to rest, get food, nest and mate in the midst of their journey.

Unlike nearby Washington Island, Plum and Pilot have never been inhabited by anyone other than lighthouse keepers, Coast Guard personnel, and their families, keeping the lands relatively undisturbed. When the Coast Guard left, the USFWS soon expressed interest in taking over management of the lands, but transferring oversight of the property proved far more difficult than one would think.

In 1998 the process began in earnest, and with the Coast Guard and USFWS land falling under the purview of the federal Bureau of Land Management (BLM), it would seem an easy process. But the story of its transfer became a study in the often absurd inner workings of government bureaucracy. 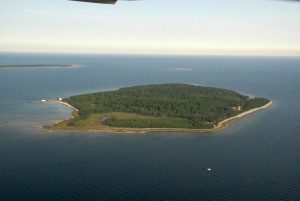 Reviews were required by several agencies and paperwork would be shuffled between Wisconsin and Washington D.C., often finding itself buried deep in bureaucratic waters as challenging as those of Death’s Door. It would stall at one office or another for months at a time, sometimes waiting for little more than a signature.

Throughout the process the buildings on the islands continued to deteriorate, but one man remained persistent and dedicated to the cause of saving the structures.

Clintonville teacher Tim Sweet has a passion for preservation – especially lighthouses – and a great deal of patience. So many great ideas and best-laid plans fall by the wayside because their originators don’t make the first move. So many more languish at the first roadblock or delay. But the soft-spoken Sweet is not one easily dissuaded.

In 1988 he joined the effort to save the then-deteriorating Pottawatomie Lighthouse at Rock Island State Park. Sixteen years later he was there to see the project through to completion. Today the lighthouse is open to visitors through a unique program that gives families a rare opportunity to glimpse the life of the old “keepers of the light.” The lighthouse is open to families to reserve a week and stay in the lighthouse in exchange for hosting visitors. Reservations fill up well in advance, and many families return year after year.

In his trips to Rock Island he would pass Plum and Pilot and lament the old beacons crumbling before the thousands of daily ferry passengers. With progress on Pottawatomie moving along he turned his attention to its neglected neighbors.

“Both of these are unique properties to Wisconsin,” he explained. “They’ve guided ships through Death’s 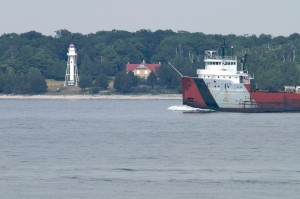 Door since the 1850s.” But now they were on their last legs – in fact, in 2000 the Plum Island Lighthouse was named one of the 10 most endangered historic properties in the state by the Wisconsin Trust for Historic Preservation.

The transfer process had begun, and the Door County Maritime Museum had expressed interest in helping Sweet organize an interpretive center if the buildings were rehabbed, but things were moving at a snail’s pace. Sweet wasn’t going to sit back and let the effort languish, however. He contacted friends, congressmen, media outlets, and kept in constant communication with officials in each branch involved in the transfer, keeping pressure on officials to keep the paperwork in motion.

The process nearly dulled Sweet, who lamented in 2006 that “the transfer process has been mired in layer upon layer of bureaucratic red tape for years. It has been a very frustrating endeavor. Sometimes I wonder if anyone really cares about saving these very unique  and historic maritime structures.”

By the middle of 2006 the USFWS said they were prepared to take over the properties but still the effort stalled, in part because of a decades-old diesel spill that left the soil contaminated. A fuel tank had burst and spoiled the water table and the transfer would require clean up before going through. Finally, in 2004, workers sifted through 1,000 cubic yards of soil and removed 600 yards at a total clean-up cost of $863,000.

Finally, in October of 2007, the land was transferred into the control of the USFWS, allowing them to partner with a non-profit organization to restore and preserve the structures. The Friends of Plum and Pilot Islands group was formed with 220 members, mostly from Washington Island and Door County, and Sweet was named its president, ending a nine-year transfer process, but marking only the beginning of a longer restoration effort.

“The buildings are in rough shape,” Sweet explained. “The first step is just trying to stabilize them to buy extra time.”

The friends group recently received a 50/50 matching grant from the National Trust for Historic Preservation to hire Ken Czapski, an architect from U.P. Engineers and Architects out of Marquette, Michigan. Czapski did an assessment of the condition of the structures on Plum and Pilot islands in July as the first part of preparing a stabilization plan for the buildings.

“The friends group would definitely like there to be public access to Plum down the road,” Sweet said. “There are several members with close family connections to [the island].”

Patti Meyers, a project leader for USFWS, said she would like to get some degree of access available as 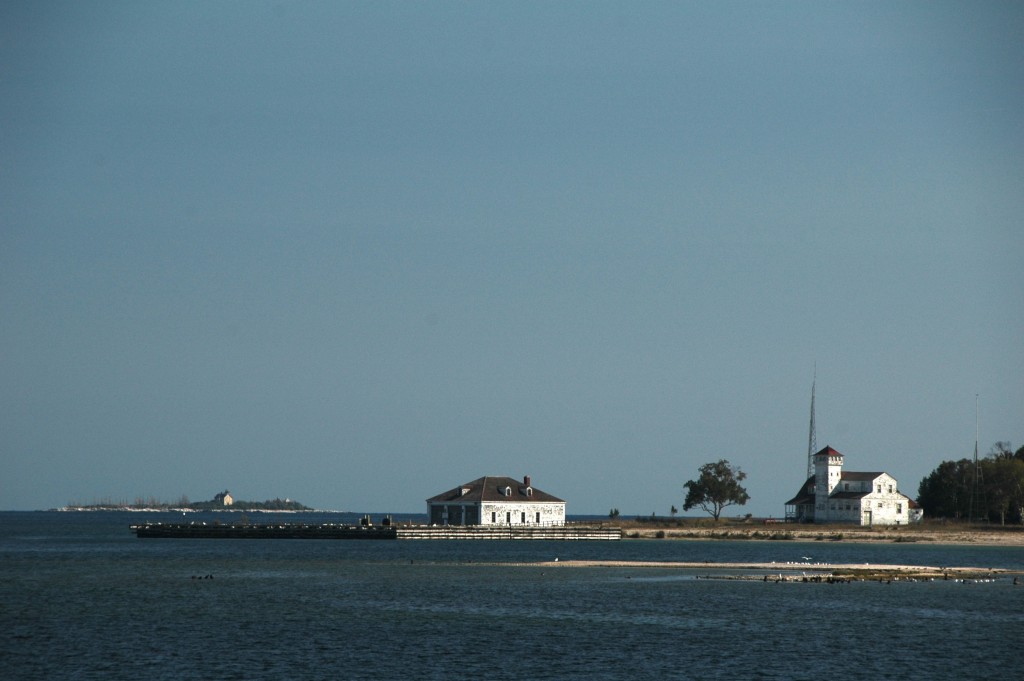 well, though her priority is wildlife. “We’re an agency that manages land for wildlife, and there’s not enough land for migratory birds,” she said. “We take into account that we have wildlife first as our mandate and we would allow activities that take that into account.”

Those activities include things like photography, environmental education, bird watching, and hunting to keep the excessive deer population on the 325-acre island in check. It is unlikely there will be any access to Pilot Island, the smaller of the two at just 3.7 acres.

“There’s a long ways to go,” Meyers said. “We have to complete a Conservation Plan, that usually takes two years because we like to do a lot of research and gather a lot of input. We don’t want to make a mistake and allow uses we’ll regret later on.”

The rehab work won’t be cheap either, Sweet said. “It’s going to cost a lot. We have to remove lead paint and repaint the buildings. The lighthouse on Pilot Island needs a new roof. The fog signal building has a collapsed roof, and the dock and breakwater at Plum Island need attention.”

In the meantime, Sweet and the friends group are working diligently to prepare. In addition to grant applications, Sweet nominated the Plum Island Lighthouse in a contest sponsored by Jeld-Wen Windows and Doors Company in which the winning lighthouse is awarded free windows for rehab projects (see side-bar). 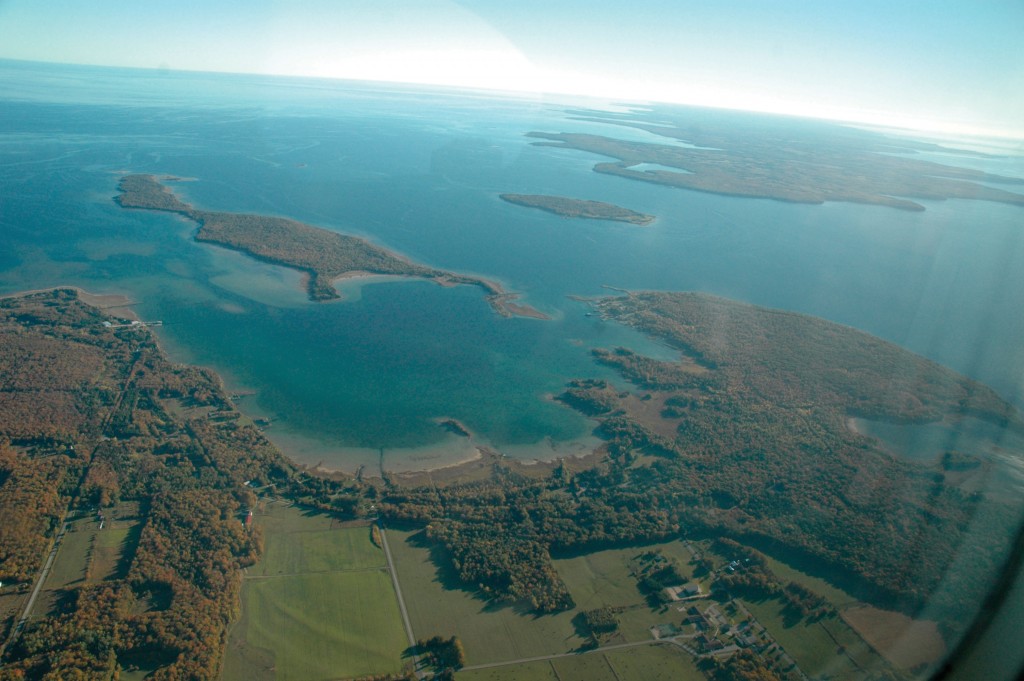 “Tim Sweet and the friends group are incredibly hard-working,” Meyers said. “We’re very glad to have him on our team.”

Meyers and her staff are working on a 15-year plan for the island including building rehabilitation and wildlife management. Though little is set in stone, Sweet said his group would like to turn the boathouse into a visitor center with displays on the Coast Guard and life-saving service in Death’s Door and possibly use it as a center for Great Lakes research.

A ceremony was held May 17, 2008 to celebrate the transfer of the island’s management, as well as the 150th anniversary of the Pottawatomie Lighthouse. An honor for two structures that owe a great deal to a patient man willing to ride out the storm, even when the seas were roughest.

Efforts to refurbish the Plum Island Lighthouse could get a big boost if a special internet voting campaign is successful.

Jeld-Wen Windows and Doors Company has been sponsoring a “Lighthouse Restoration Initiative,” in which they help refurbish a lighthouse by installing new, custom-made windows and doors.  The winning lighthouse is chosen from among 12 others in an internet vote on the company’s website.

Tim Sweet, a member of the Friends of Plum and Pilot Islands, filled out an application for consideration and Plum Island, which dates to 1897, was chosen as a finalist from among 70 applications. To see photos of past restorations and place your vote, visit www.jeld-wen.com/lighthouse/

Jeld-Wen began the Reliable Lighthouse Restoration Initiative in 2005 to prove the reliability of the company’s windows and doors — even in coastal climates — by helping to save historic lighthouses for their communities. The company previously donated to the Wind Point Lighthouse in Wisconsin, the Thomas Point Shoal Lighthouse in Maryland, and the Umpqua River Lighthouse in Oregon. Voting ends on September 7, 2008.