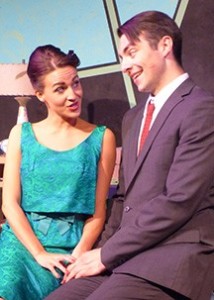 Luke MacMillan, as Hubert, and Kaleigh Rae Gamaché, as Serena, in Third Avenue Playhouse’s production of “Maid to Marry.”

A brand of humor that has transcended centuries is going to be on display at Third Avenue Playhouse (TAP) throughout May. Maid To Marry, the world premiere adaption of the comedy classic La Serva Padrona by G.B. Pergoloski, will play at the Sturgeon Bay theater through May 31.

“This particular piece has never been seen before, so it’s something brand new,” says TAP’s co-artistic director, James Valcq.

Valcq has a rich history in theatrical performance and production. His involvement began as a youth in Milwaukee and his journey took him all the way to the theatrical mecca of Broadway in New York City. His talents were brought to Door County in 1983 where he was part of the Heritage Ensemble, pre-cursor to Northern Sky Theater.

While Valcq has been involved in the production and composition of a plethora of theatrical genres, Maid To Marry is a sketch comedy rooted in the 16th century’s Commedia dell’Arte. Originating in Italy, this branch of comedy was the genesis for contemporary comedy where characters are placed in absurd and slapstick scenarios.

Valcq’s adaption is set in the 1950s and tells the story of a zany maid who plots to marry her boss. When her harebrained plans don’t pan out, she seeks the assistance of the butler to help with her uproarious plans.

This time-honored tradition of comedic expression is something that has had audiences splitting their sides for generations.

“If it’s funny once it’s always going to be funny,” Valcq says. “We are saying the show is like I Love Lucy meets Mad Men. So we have the I Love Lucy scheming against Ricky side and misogynistic, social conscious Mad Men side working together.”

Maid to Marry has also provided a tremendous opportunity for two aspiring performers in Kaleigh Rae Gamaché, as Serena the maid, and Luke MacMillan as Hubert, the boss. Craig McClellend, an accomplished actor/musician and local to Door County, plays Curley, the butler.

“This has been a fantastic opportunity because a lot of people don’t get the chance to perform outside of college,” MacMillan says.

MacMillan, who graduated from Lawrence University last spring with a Bachelor of Music in Vocal Performance with a Theater Arts minor, made his debut with the Stage Door Theater Company last October as The Mute in The Fantasticks. 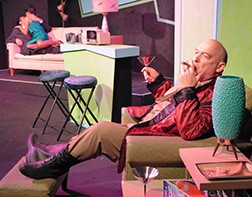 Involvement in a big-time production right out of the university gate helps in better understanding the nuances and effort that goes into the creative process of such a venture.

“We got the script or the score and we saw the adaptions and started learning the music and the text,” says Gamaché. “From then on taking it into the creative world and the show.”

Gamaché graduated last spring from the University of Milwaukee-Wisconsin with a BFA Vocal Performance degree. She has performed with Skylight Music Theatre, Milwaukee Opera Theatre as well as a host of other roles and theatrical outlets.

Director and cast agree that collaboration has been essential in improving the structure and comedic elements of the performance.

“We each do our own work and once we come together we have our own ideas and we can present them to one another and make a collective decision as to how we move on,” Gamaché says.

Valcq adds that, “Something will almost always come up when you have real people other than just yourself in the room planning something out and that’s definitely been the case in this and I’ve loved it when we come up with something spontaneously in rehearsal.”

The intimate setting of TAP brings the audience close to the stage, making the theatrical experience more palatable and illuminative than bigger playhouses where individuals situated farther away may feel disengaged from the nuances of the performance.

The TAP’s warm and almost family-like atmosphere forges a comedic camaraderie between audience and actor.

“In TV comedies a lot of it is reliant on close-ups and in a big theater you can’t do that,” Valcq says. “But here every shot is a close-up because you’re right there and we can do those goofy, subtle things as well as the big, broad things.”

Maid to Marry will be performed at 7:30pm Thursdays through Saturdays and at 2pm on Sundays through May 31 at TAP, 239 N. Third Ave. in Sturgeon Bay. General admission is $22 on Thursdays, $25 on Fridays through Sundays, and $10 for students. Purchase tickets online at ThirdAvenuePlayhouse.com or by calling the box office at 920.743.1760.