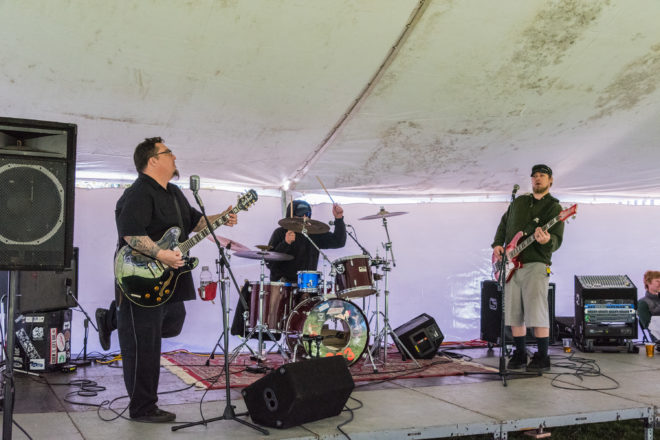 One of Door County’s premier rock ‘n roll bands is setting the stage to show the nation at large the fun and entertainment that their shows have brought to tourists and locals across the Door Peninsula.

Dirty Deuce has been providing memorable nights to entertainment-seekers across the county for eight years and they are anticipating one of their most important shows this Friday, May 13.

“We’ve never done anything like this before,” said “Reverend” Rob Atwood, vocalist and guitarist for the band. “It’s either been a label, an investor, or somebody else but we’re going to give this a shot because we’ve seen other people be successful.”

Atwood is referring to a career-altering campaign that will be kicked off the night of the 13th at the Door County Fire Co. in Sturgeon Bay. The Indiegogo campaign is the band’s aspirational outlet to get their upcoming album, 333, financed by their supporters.

The show will mark the beginning of the band’s 30-day endeavor to raise funds for the album’s production and availability to the public.

“This album has been two-and-a-half years in the works whereas every other album we’ve put out, once we had enough songs to put into an album, we went and did it and put it out,” Atwood said.

“This album, we packed a lot of time and effort. If you go to Dirty Deuce on Facebook you can see we’ve been in several magazines, articles and radio stations across the world in the last few months.” 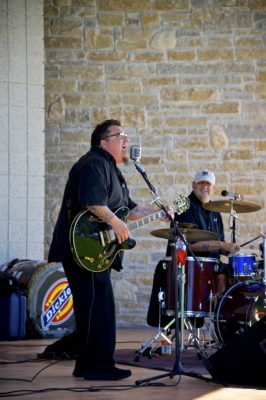 Rob Atwood and Jamey Clark, of Dirty Deuce, perform during the Peninsula Century Fall Challenge in 2014. Photo by Len Villano.

Dirty Deuce is based in Sturgeon Bay and is comprised of Atwood, Zach Vogel on bass, and Jamey “J-Dirt” Clark on drums.

The group appreciates the fact that their original brand of rock ‘n roll has resonated so well among the Door County population and they think that people are more open minded to original music in comparison to other parts of the country they’ve played.

While the band loves playing at venues across the peninsula, the hope is that 333 will open them to other opportunities, such as touring abroad and playing music as a full-time job.

The album’s title is homage to a close friend of the band, Billy Triplett (hence 333) who produced their last album, Big Ol’ Sexy. Triplett passed away unexpectedly during the production of the upcoming album.

Creating a large fan base in the county and embarking on this monumental step for the band, it only makes sense to throw an inaugural party that the fans can enjoy.

“We’re doing the show because everyone up here has given us such great support no matter what,” Atwood said. “People love the music up here and basically you’d get your first chance at being part of the album.”

The show begins at 8 pm. There is no cover charge. The band will perform the entire 333 album. For more information, call 920.818.0625 or visit doorcountyfirecompany.com.