When Eagle Tower is rebuilt in Peninsula State Park, it will include a ramp that weaves through the forest canopy to the tower.

The Department of Natural Resources (DNR) released the three design concepts for Eagle Tower this week, just before a fundraiser for its reconstruction. Depending on the concept design chosen by the DNR, the Sept. 30 fundraiser featuring a live and silent auction of wood from Eagle Tower may be the final effort in raising funds for a new tower.

The lowest cost for one of the Eagle Tower design concepts is $1.65 million, with a high cost of $3.3 million for a 75-foot tower with an elevator.

The DNR held a public information session and hearing after Pulse press time on Sept. 28. The department will accept public comments on the proposed design concepts until Oct. 9.

An elevator will take visitors to the top viewing deck at a height between 50 and 75 feet. The DNR estimates significant maintenance costs during the next 25 years for this option. A significant portion of the $3.3 million price tag comes from the cost of blasting and installation of electrical service that would be brought from Hwy 42 near the golf course entrance to power the elevator.

This option would require the raising of more than $1.5 million additional funds. Estimated groundbreaking and completion date for this option are unknown.

A four-corner post with an internal ramp would lead viewers up to a tower with a maximum elevation between 50 and 75 feet. DNR expects the footprint of the tower will be much larger than the original tower and expects maintenance during the next 25 years will be minimal. Fundraising for this option is already complete and the DNR would be able to break ground in November 2018 with an expected completion date of June 2019.

A ramp would begin at the Eagle Tower parking lot and loop through a portion of the canopy, crossing back over the parking lot to the tower at a height of between 50 and 60 feet. Fundraising for this option is nearly complete and the DNR would expect to break ground November 2018 with a completion date of June 2019.

All options will incorporate elements of the original Eagle Tower, include site and access improvements and meet all applicable building codes, including compliance with the Americans with Disabilities Act (ADA).

At Southwest Florida Fest at White Cottage Red Door on Sept. 30, a live and silent auction will feature the work of carpenters and craftsmen using wood from the original Eagle Tower to create everything from art to cabinetry. The auction will be the first time remaining pieces of Eagle Tower will be made available to the public.

Online bidding for objects will not be available. There will be additional sales and events featuring the wood after the fundraiser on Sept. 30.

Bob and Paula Cummings of Fish Creek started the event as a way for anyone that spends part of their winter season in southwest Florida to get together annually and support a different Door County charity each year.

Tickets will be sold at the door ($25 for adults and $15 for kids 12 and under) and include food and drink as well as a raffle ticket. 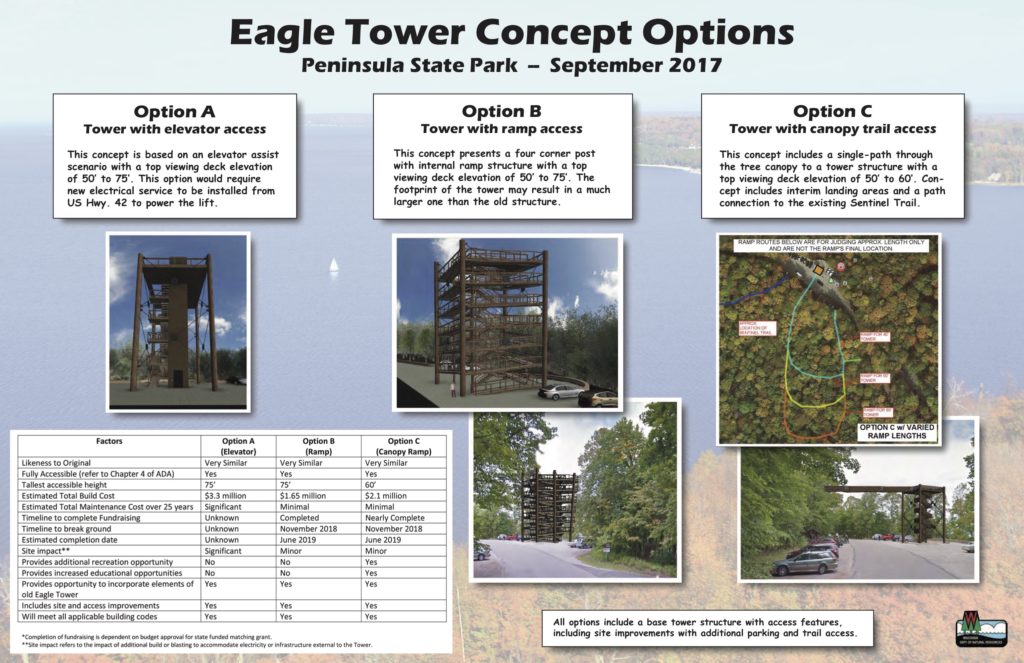 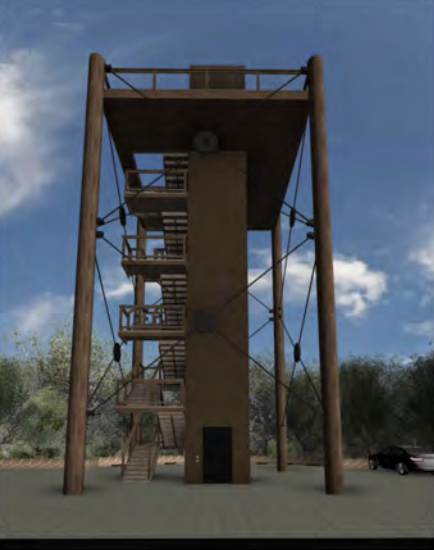 Option A would include an elevator at a cost of $3.3 million. 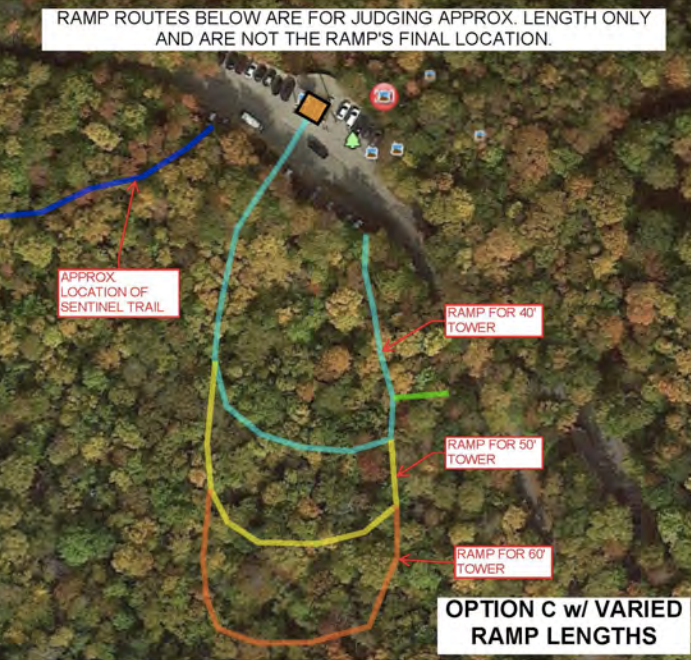 A depicition of the proposed routes for the canopy ramp in Option C. 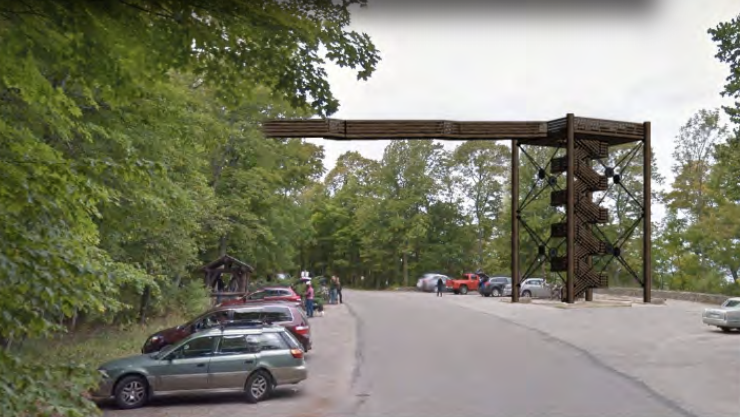 When Eagle Tower is rebuilt in Peninsula State Park, it will include a ramp that weaves through the forest canopy to the tower. 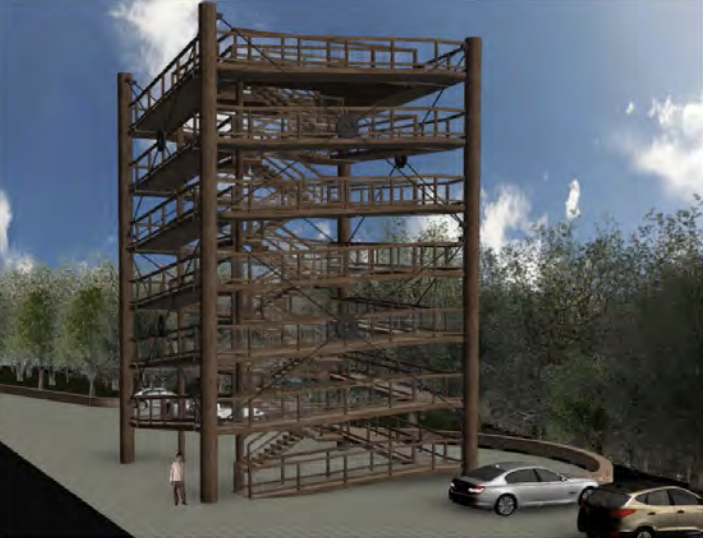 Option B would increase the footprint of the tower. 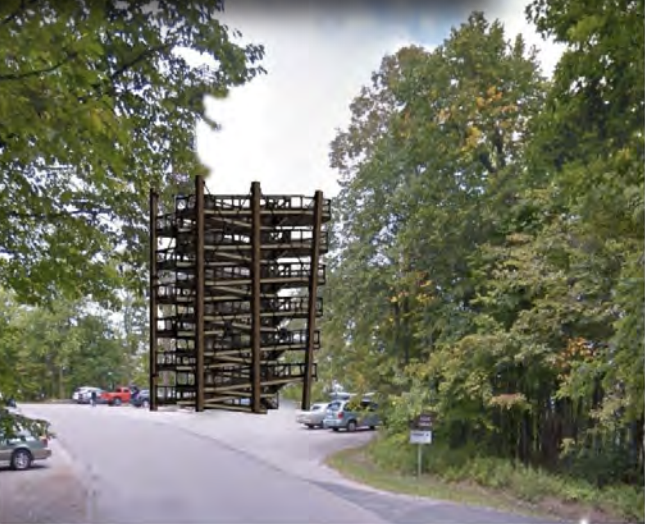 Option B would include an internal ramp at a cost of $1.65 million.