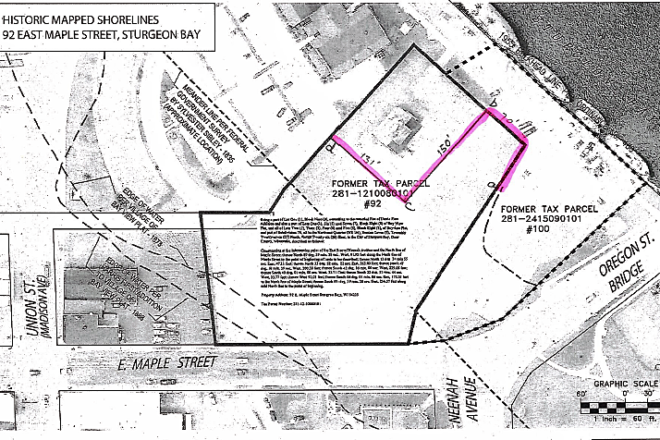 The Wisconsin Department of Natural Resources (DNR) on April 14 sent a letter to Sturgeon Bay Mayor Thad Birmingham that places the Ordinary High Water Mark (OHWM) in a location that allows for the disputed waterfront hotel.

In the letter from the DNR’s Russell Rasmussen, it is noted that “the physical or biological indicators typically used to locate the OHWM at a site have been destroyed at this site. We believe that determining the OHWM location at this site will have to be based on reviewing historic maps, photos, news articles, surveys, and other documents available for the site. Even after doing that, any determination without physical evidence may be an educated estimate based on best available evidence.”

Rasmussen said this preliminary determination was based on several years of aerial photos, site photos, U.S. Army Corps of Engineers lake surveys, as well as other maps, surveys and historical descriptions of activities in the area.

Rasmussen ended the letter by saying that the Friends of the Sturgeon Bay Public Waterfront petitioned the department for a declaratory ruling and that all parties be bound by the ruling. He said a public hearing will be held, at which time the department “will provide information showing in greater detail how we arrived at our preliminary OHWM determination…” A final ruling will be issued after the hearing.

The Friends have maintained that the private hotel development is within the OHWM, and, therefore, under the public trust doctrine, which prevents selling the land to a private developer.

During a two-day court trial in February, Judge Raymond Huber of Waupaca agreed, and ruled that the hotel would sit on filled lakebed. He ordered the city not to sell the property to hotel developer Bob Papke.

“The DNR’s preliminary OHWM is shocking in that it completely contradicts the circuit court’s findings of fact and seems unsupported by any of the historical maps or physical evidence produced at trial, which were the subject of detailed expert testimony and cross-examination,” said Friends spokesperson Shawn Fairchild. “We look forward to the facts found at trial being central to the ultimate determination.”