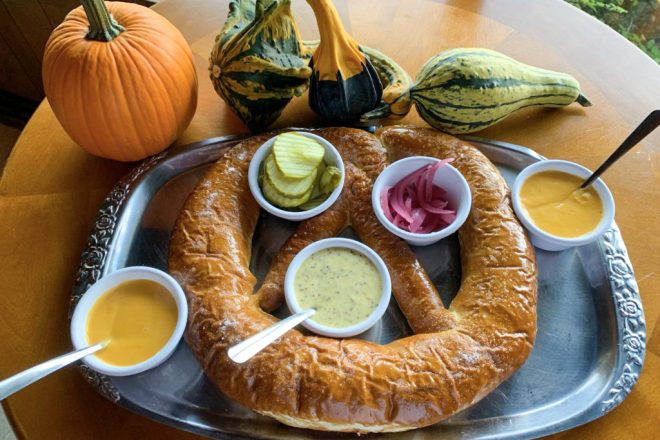 The Hügel Haus Pretzel is the star of the show. Photo courtesy of Hügel Haus.

Oktoberfest, the world’s largest Volksfest (a combination beer festival and traveling funfair) is canceled this year. Well, actually, it was canceled last year, and it’s officially on hiatus until 2022. And that’s understandable, given the event often brings in millions of visitors (6.4 million in 2013, for example), and it’s hard to socially distance that many gregarious people.

If you still want to celebrate, however, and a smaller crowd sounds more appealing, have no fear: Hügel Haus is here, and with all the Märzen you could want. Join the party Sept. 25 during the third Hügel Haus Oktoberfest: a full day of beer, food and music.

“It’s a lot of fun, and we get really busy,” said Kevin Lawell, owner and front-of-house manager. “We get going right away at 10 am. We’ll have a limited run of shirts made by Shane Krueger. They are pretty cool, and they will go fast.”

It wouldn’t be Oktoberfest without the titular beer, and Hügel Haus will have several on tap, including New Glarus Staghorn. To go with the beer, expect giant pretzels, brats and some tasty surprises, such as sweet-mustard pulled pork on a pretzel bun.

The live-music lineup is stacked, and Oktoberfest has the polka favorites more than covered. Enjoy the Sugarbush Boys, 10 am – 1 pm, and Jerry Voelker & The Jolly Gents, 2-5 pm. Frank Maloney & His Big Country Unit will finish off the fest and rock the house, 6-9 pm.

For those whose annual trip to Munich has been rescheduled yet again, our condolences. That just means you can join everyone else for the local festivities at Hügel Haus, 11934 Hwy 42 in Ellison Bay.