A Sturgeon Bay landmark is getting some new blood pumped into it – Irish blood that is. What has long been known as The Stein on East Oak Street will officially open as Kitty O’Reilly’s Irish Pub on March 13, in time for St. Patrick’s Day celebrations March 17.

The new owners, Buster Crook and Amy Briggs, purchased the The Stein from Wenzel and Ella Mae Sternard in November. Briggs was born and raised in Sturgeon Bay and met Crook in his hometown of Seattle, WA. The couple decided to change the German atmosphere of The Stein into more of an Irish pub for a variety of reasons.

“We’ve traveled all around the world and really enjoy the atmosphere of pubs,” Crook said. “How they treat you and make you feel.” 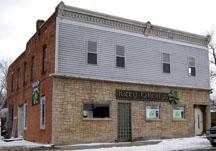 “An Irish pub is one of the few things missing from Sturgeon Bay,” Briggs said. “As you head north in Door County, say to Bayside [in Fish Creek], you get more of that pub feel.”

Briggs said their ultimate goal with Kitty O’Reilly’s is to create a neighborhood pub that will give locals a place to hang out all year long and be a great summer spot for visitors.

Very few structural changes were made inside the bar: the lines of the bar itself still hooks in the same candy cane shape, and dining seating will still be in the open room behind the bar. Fresh coats of paint, new lighting fixtures, a new bar top, a couple large flat screen TVs, and new furniture give the bar new life, as does a mural depicting Sturgeon Bay landmarks on the back dining room wall. Artist Bethany Kirwen blended notable historic city buildings into a scene that fades into a background of green Irish hillsides dotted with castles.

Kitty’s will serve lunch and dinner with some traditional Wisconsin pub food – like burgers and brats, as well as some traditional Irish dishes – such as bangers and mash, corned beef and cabbage and fish n’ chips. In keeping with Irish tradition, Kitty’s will have Guinness on tap, along with other tasty imports like Harp and regional beers such as those from the New Glarus brewery. Kitty’s cook Patrick Floyd will also be grilling up smaller portions for a kids’ menu.

In light of the statewide smoking ban set to begin in July, Kitty’s will be smoke free inside from the beginning. However, Crook and Briggs have plans for a deck and outdoor seating that will be constructed as soon as the snow melts.

“We’re going to bring in live music – bands, and smaller music groups or individual musicians,” Briggs said. “We’ll turn the dining room into a dance floor and stage for live music. We also want to have outdoor heaters on the deck during the colder months so people can enjoy our fabulous view of the water and smoke outside.”

Crooks added that he plans to play traditional Irish music in the bar during the day.

The couple received a $40,000 loan from the Door County Economic Development Corporation and the City of Sturgeon Bay Revolving Loan Fund program to help finance the purchase of the pub. According to information from the Door County Real Property listing, the purchase price was $202,000, and includes the building and about half an acre of property the building sits on. The original portion of the building was built around 1895, Briggs said, and was originally called the Eagle Hotel with rooms on the second floor and a bar on the first floor. The building has since had many structural additions.

The name Kitty O’Reilly’s is a combination of Briggs’ nickname and an old Irish motto the two want to make synonymous with their pub: Great food, great fun and great people.