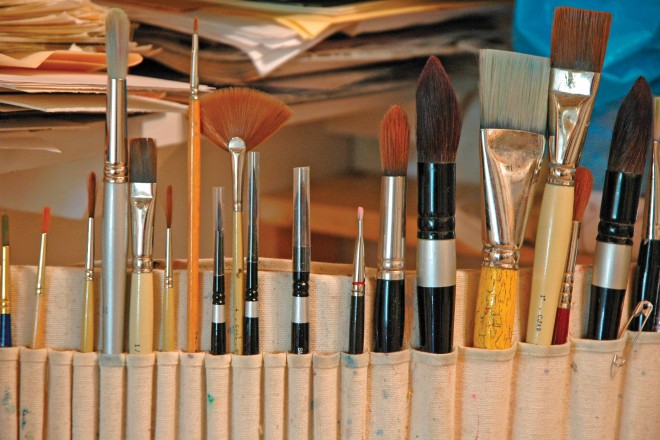 Plato considered “art” to be nonsense, a form of play not to be taken seriously. Aristotle, writing a generation after Plato, saw things differently. He saw “art” as a means of understanding and comprehension. He saw it as a way of widening the mind’s access to the world. It may be play, but it is play with a vital purpose. Donna Brown has deeply considered both viewpoints…in fact she has lived them.

As a child Donna liked to draw. People observed that she had a remarkable ability to draw what she saw. But they offered little encouragement. In the late ’60s everyone was looking for the things that had importance. Donna’s gift for drawing, it seemed, served no particular purpose. And so Donna was drawn to organic farming, environmental protection efforts and even a short stint as a weaver. These things were important, functional and made a contribution to the world.

Almost by accident Donna then met an artist who would change her life. At the age of 27, just for the fun of it, she enrolled in an adult evening class on life drawing. The woman in Vermont who taught the class said simply you could not be in the class unless you planned to take it seriously. That meant you had to work at your art every day and you had to put your heart and mind into the process. Donna says this teacher wanted her to make a commitment, something Donna had avoided doing out of fear that her efforts would not matter. And so Donna took a chance that it would work out — a chance she continues to take every time she begins a new piece or begins exploration of a new medium.

Ten years ago Donna and her husband Errol moved to Door County from Portland Oregon. Both had ties to the Midwest; Donna was born in Kansas City and Errol grew up in Wisconsin. After traveling extensively and living in a variety of regions they wanted to return to the Midwest because they liked the people and the seasons and wanted a peaceful place to raise a family. The rural environment of Door County combined with its stunning physical beauty made this an attractive choice. Donna opened her White Barn Gallery on Highway 57 just north of Baileys Harbor in 1994. Since then she has established herself in the area as a respected artist, a teacher, an arts community leader, and a catalyst for the growth of interest in printmaking in Door County.

Donna believes “those who are serious about art must think philosophically about what they are doing.” She ties her personal philosophy to questions about art that have circulated for centuries.

Some believe that the value of art lies in its ability to accurately and beautifully represent objects in the natural world. A still life that makes a two-dimensional figure appear three-dimensional causes wonder and admiration. If one is moved to want to taste the pear in the bowl, or smell the flowers in the vase on the table, one has experienced good art.

On the other hand there are those who believe it is the way things are seen, the choice of things to see that offers a visual language for invisible states of mind. Art by this definition is a vehicle for understanding both the artist and oneself.

Donna says art is her tool for making sense of the world. “I explore the world around me visually. When I see something that strikes me emotionally I begin to visually appraise it, attempting to depict its essence. Sometimes a careful rendition allows me to understand more about a subject. While at other times, less is more: leaving room for the viewer to become involved.”

For Donna each piece of work is a journey of its own. For years Donna worked primarily in watercolor. She has a significant following of people who are mesmerized by her willowy irises and her boisterous fall flowers. In more recent years Donna has begun exploring printmaking as a medium of expression. She says each method she employs contains an element of surprise. “You never know for sure where the struggles will be. The preliminary work in gaining control of the medium is crucial. Sometimes it takes hours and hours to rework and rethink what you are doing. When a painting is working well you are totally into it. There is a sense of captured energy, a creative flow. It is a non-egotistical space. When you finish you stand back in awe and you are pretty sure you could never reproduce what just happened.”

Paradoxically however, Donna says the work does not end with her. It is the observer that completes the process. Just as a musician plays for an audience, so she offers her work to her patrons for their response. “A piece is never finished as long as someone is still looking at it. I distill my work so that the viewer can enter and make some completion or choices as to its meaning or value to them.”

Another philosophical debate about art raises the question: is art what you do for a living or is art what you do for a life? When Donna started exploring printmaking it was with the intent of freeing up more of her time to experiment with watercolor. She hoped printmaking would allow her to more easily create multiple art originals that would financially expand her income. Then she could take time to experiment, take risks, and imagine new possibilities with watercolor. To her surprise the opposite happened; she became totally intrigued by the possibilities printmaking offers for making images.

Donna says learning printmaking has been an exhilarating though daunting process not unlike when she began to take her art seriously. It requires staggering humility, a healthy dollop of vision, a lot of hard work to develop the technical expertise and once again a commitment to live as an artist — to take a chance that what she does might not work out or really matter.

By traditional standards she does not consider herself a true printmaker, often using printing simply as a component of a work. She will combine monotype, relief or intaglio in a painting to stir excitement. She says she is relentlessly drawn to the element of surprise that happens each time she removes the paper from a plate. She is intrigued by the unique textures inherent to the medium, the reversal of imagery and the many variations one can explore to create a cohesive body of work with similar yet individual nuances.

The main problem with printmaking according to Donna is that it requires expensive equipment that takes up space. She had neither the money nor the space so she wrote several grants to garner support. Fortunately, Donna earned grants from the Peninsula Arts Association (PAA) allowing her to experiment with the newest nontoxic forms of etching. Due to her enthusiasm for the medium Donna has gone on to become a stimulus for the exploration of printmaking in Door County. With the support of the PAA and the Peninsula Art School she is using her expertise and enthusiasm to broaden the understanding of printmaking as an exciting, contemporary medium through workshops and demonstrations.