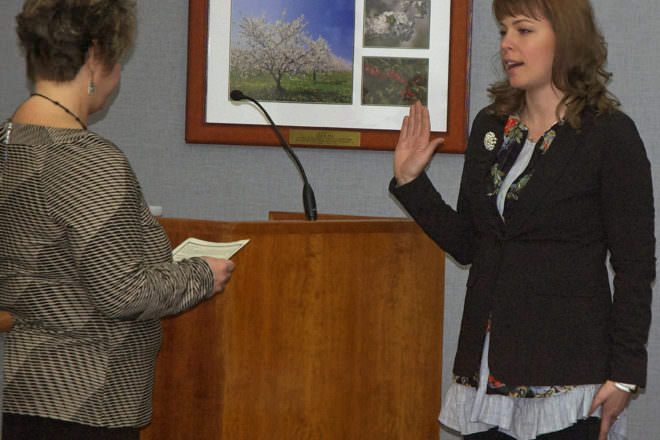 Door County Clerk Jill Lau swears in new county board supervisor Laura Vlies Wotachek at the county board’s monthly meeting on Jan. 24. She was appointed to fill the District 9 supervisory position on the east side of Sturgeon Bay that was held by Richard Haines. Haines, 68, died on Nov. 30. Photo by Jim Lundstrom.

After some discussion on the length of amortization, the Door County Board of Supervisors voted at its Jan. 24 meeting to issue $9,995,000 in general obligation bonds to pay for the third and final stage of the Central Ambulance Station and Human Services Resource Center project in Sturgeon Bay.

The amortization discussion involved whether to structure the repayment schedule for 15 or 19 years. The Property and Finance Committees had recommended the 19-year option, but Supervisor Jon Koch pointed out that the county could save $1 million in interest with the 15-year option.

County Administrator Ken Pabich explained that Ehlers, a public finance municipal adviser, looked at a variety of payback options for the county, and it was decided that the 15- and 19-year options were most viable for the county. After that, which one to choose was “a matter of philosophy,” Pabich said. Ultimately, he said, the 19-year option offered more flexibility for the county to bond for other projects in the future.

“It’s a matter of comfort,” Pabich added. “We recommend the 19-year option, but we could work with the 15-year.”

Supervisor Kathy Schultz, who chairs the Finance Committee, said the committee liked the 19-year option better because it had a smaller impact on individual property tax bills.

“One of our jobs is to manage the tax burden on taxpayers and this allows it to be a more smooth process,” said Susan Kohout, who also sits on the Finance Committee.

“It makes more sense, given the atmosphere we’re living under right now, to go to 19 years, and I would strongly urge that we hold to that,” said Finance Committee member Ken Fisher.

Supervisor Richard Virlee, who chairs the Property Committee, said he supported the 19-year option because it spreads the tax burden out. “People look at how much a tax bill is going up. Spreading it out over 19 years is a better deal,” he said.

“Personally, I have a problem with 19 years,” said Supervisor David Enigl, who made a motion to go with the 15-year option. His motion lost on a 14 to 6 vote, and the 19-year option was adopted.

The contract for the third and final phase of the ambulance and human resources center was awarded to IEI of De Pere, Wis., for $8,128,000, “which we felt was an excellent bid to do this project,” Property Committee Chair Virlee said.