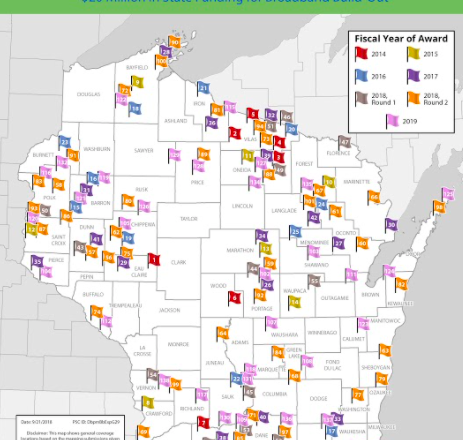 Inquiries fielded by the Door County Economic Development Corporation (DCEDC) this year have come from young entrepreneurs who have discovered Door County after COVID-19 drove them in search of less populated places of natural beauty. They have explored running their businesses or working remotely from the peninsula, according to Steve Jenkins, DCEDC executive director.

“But the first thing they ask is, ‘Where can we get broadband?’” he said. Unfortunately, it’s a question he couldn’t answer – not for them, not for anyone.

“It’s a guessing game,” he said. “Where is the service exactly?”

And how strong, reliable and affordable is it where it does exist? And where are the black holes of coverage?

A broadband engineering assessment would answer all these questions, Jenkins said, which is why he’s asking all of Door County’s municipalities to help by contributing funding to pay for the study. The comprehensive report would unearth voids in coverage up and down the peninsula by determining what’s available where and at what capacity.

“This will be critical to seeking financing for a solution to the broadband challenges faced by residents and businesses,” Jenkins said.

Some local municipalities have tried to increase capacity individually through annual competitive grants that have allowed them to erect towers or run some fiber-optic cable to connect a few more houses, businesses and schools. In this way, little by little, the state’s rural and least-connected areas wrench themselves up into the 21st century.

But Jenkins said a countywide approach is needed, rather than communities going it alone, which he described as “a hit-or-miss-type solution, dependent on who’s successful in getting a grant. That won’t really serve the county.”

A few local government units have responded to Jenkins’ request. Door County budgeted $25,000 toward the study that Jenkins estimated could cost up to $40,000.

“Funding for state and federal grants are becoming more difficult with criteria for existing internet access,” said Ken Pabich, Door County administrator. “For us to address this issue, we really need to understand what is available by all the providers and determine strategies to expand these services.”

Liberty Grove has pledged $5,000, Jenkins said. That is one of two Door County communities to have received a broadband upgrade grant from the state. The Liberty Grove Town Board was also preparing to consider on Wednesday evening, Nov. 4, a recommendation from its technology committee to submit another Wisconsin Public Service Commission Broadband Grant application for 2021 for $300,000, with the town’s matching contribution to not exceed $75,000.

The third municipality that has responded to Jenkins’ request is Baileys Harbor. That community committed to donate $3,000 if three other communities matched that amount or greater.

Jenkins anticipated more communities would come on board as they finalized their 2021 budgets.

“We would like to have everybody involved because everybody is affected by this,” Jenkins said.

Jenkins listed all the reasons why the peninsula’s residents – from school-aged students to seniors, remote workers to health care professionals – need reliable internet services. His explanation seemed designed to convince someone that broadband is needed, which raised the question: does he regularly encounter people who don’t believe broadband access is a necessity for contemporary life?

“I think sometimes elected officials need to understand how critically important broadband is,” he said. “I think sometimes they may have looked at it as a luxury item. And COVID really shined a bright light on the vulnerabilities where there’s no broadband or a service not robust enough.”

The assessment would eventually position the county for state and federal monies that are expected to open up for broadband expansion in rural areas, or initiatives that might evolve from the Governor’s Task Force on Broadband Access.

“We want to be able to go after what is available by putting a comprehensive solution together,” Jenkins said.